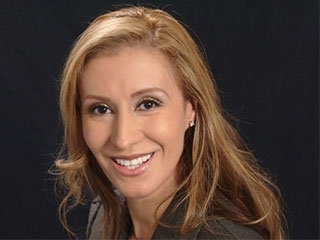 Dr. Erika T. Camacho received her B.A. in Mathematics and Economics from Wellesley College in 1997.  After earning her Ph.D. in applied mathematics at Cornell University in 2003, Dr. Camacho spent a year as a postdoctoral research associate at Los Alamos National Laboratory. She then held a tenure-track faculty position at Loyola Marymount University before joining the faculty at Arizona State University  (ASU) in 2007.   She was a 2013-2014 MLK Visiting Assistant Professor of Mathematics at Massachusetts Institute of Technology (MIT). She is currently an Associate Professor in the School of Mathematics and Natural Sciences (SMNS) at ASU.

Her leadership, scholarship, and mentoring have won her national recognition including the SACNAS Distinguished Undergraduate Mentoring Award in 2012, the Hispanic Women Corporation (HWC) the National Latina Leadership Award in 2011, recognition as one of 12 Emerging Scholars of 2010 by Diverse: Issues in Higher Education, and a citation for mentoring and guiding undergraduates in research by the U.S. National Security Agency.  Some local recognitions include the Dr. Manuel Servin Faculty Award for excellence in exemplifying achievement in research, mentorship of Hispanic students, leadership at ASU and in the community in 2013, the New College of Interdisciplinary Arts and Sciences Faculty Service Award in 2013, the 40 Hispanic Leaders Under 40 Award in 2012, and one of three recipients of the ASU Faculty Women’s Association Outstanding Faculty Mentoring Award in 2011.

Dr. Camacho has been profiled and featured in Univision Nightly News in a two part segment entitled “Erika Camacho’s Inspirational Story”, the SIAM News “The Intersecting Lives of Two Mathematicians in East L.A.”, the State Press, SACNAS News Feature Article “Leadership”, Latino Perspectives Magazine “Camacho stands and delivers”, the SACNAS New Feature Article “Building Confidence”, and recently in Voces “I am the American Dream: Erika Tatiana Camacho, Ph.D.”.  She has been interviewed on CBS Evening News and NBC Nightly News as part of a segment in honor of her high school mentor and teacher Jaime Escalante subject of the movie “Stand and Deliver” and in PBS Arizona Horizonte for her HWC Leadership Award.

Dr. Camacho’s invited presentations range from panel presentations to invited research talks to keynote addresses, in front of national and prestigious audiences including (but not exhaustive) the Presidential Awards for Excellence in Science Mathematics and Engineering Mentoring (PAESMEM) Awards Ceremony, the Associateship and Fellowship Program Advisory Committee of the National Academies of Science, the MAA Invited Address at MathFest, the Annual Biomedical Research Conference for Minority Students (ABRCMS), the Compact for Faculty Diversity’s Annual Institute of Teaching and Mentoring, the Dorothy Wrinch Lecture in Biomathematics at Women in Math in New England Conference, and the Association of American Colleges & Universities TIDES Institute.

Dr. Camacho co-founded and co-directed the Applied Mathematical Sciences Summer Institute (AMSSI), dedicated to the recruitment of undergraduate women, underrepresented minorities, and those that might not otherwise have the opportunity.  She was co-director of the Mathematical & Theoretical Biology Institute (MTBI) in 2011-2013, and focused on similar efforts.  Dr. Camacho’s passion is to continue the work and legacy of her mentors: to create opportunities for those individuals from marginalized communities and make graduate education attainable to them through intensive research. She involves students in her own work, which is at the interface of mathematics and its applications to biology and sociology.

Dr. Camacho’s research projects include mathematically modeling photoreceptor interactions, photoreceptors’ degeneration in retinitis pigmentosa (PR) and in a detached retina, the secondary death wave in RP, the rescue effect of RdCVF in a degenerative retina, gene networks within yeast, social networks, STEM migration, alcohol effects on a neuron firing, and fungal resistance under selective pressure. Among the publications she has authored/co-authored are “The Development and Interaction of Terrorist and Fanatic Groups” in Communications in Nonlinear Science and Numerical Simulations; “Tracing the Progression of Retinitis Pigmentosa via Photoreceptor Interaction” in the Journal of Theoretical Biology; “Optimal Control in the Treatment of Retinitis Pigmentosa” in the Bulletin of Mathematical Biology;  “On Positive Influence Dominating Sets in Social networks” in Theoretical Computer Science; “Dynamics of Two van der Pol Oscillators Coupled via a Bath” in the International Journal of Solids and Structures;  and “Traveling Wave’ Solution of FitzHugh Model with Cross-Diffusion” in Mathematical Biosciences and Engineering.


Page last modified March 20, 2019
Report a problem with this page