Special Collections and University Archives contains a number of special book collections, described below. Though these books do not circulate and cannot be checked out, they may be read and studied in our Reading Room in Seidman House. Portions of our book collections have been digitized and are available in our Digital Collections.

Our Rare and Distinguished Book collections are organized in several different categories. Use these links to jump to an area of interest.

History of Books and Printing 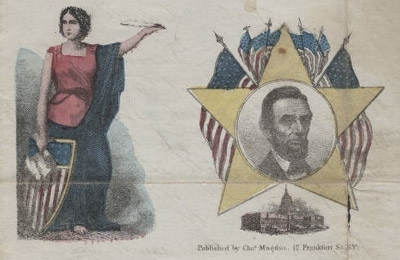 The collection includes books about President Lincoln’s life, politics, presidential terms, and assassination. The collection also contains books on Civil War campaigns, battles, and regimental histories. It also contains slave narratives of Frederick Douglass, Harriet Tubman, Josiah Henson, and others. The bulk of the collection was acquired by Grand Valley as a gift of Harvey Lemmen, but has grown since the initial acquisition. 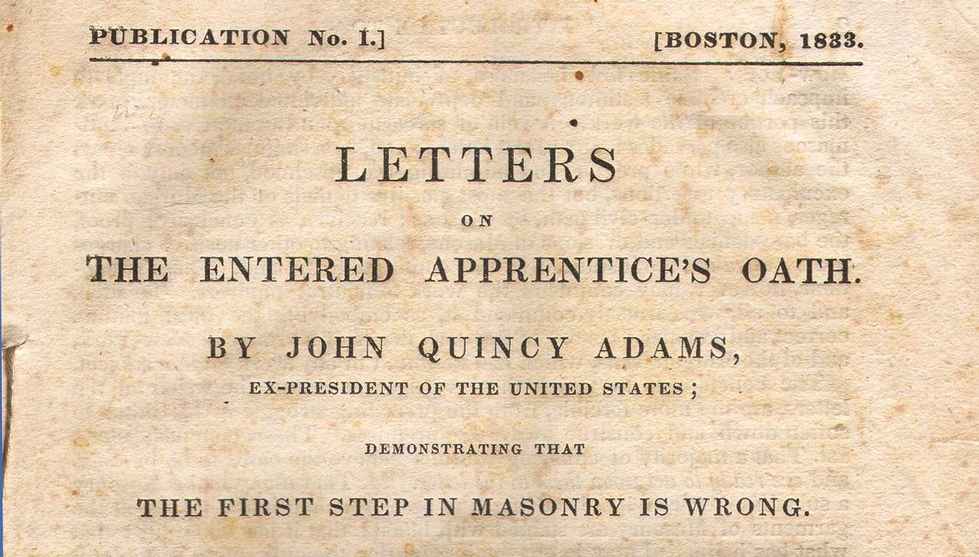 This collection is held in association with the Hauenstein Center for Presidential Studies. It contains published works of the U.S. Presidents. It includes diaries, letters, speeches, memoirs, and official papers.

This collection is held in association with the Hauenstein Center for Presidential Studies. The espionage collection includes published works that deal with espionage, military intelligence gathering, cryptology, and policy studies from the nineteenth century forward. 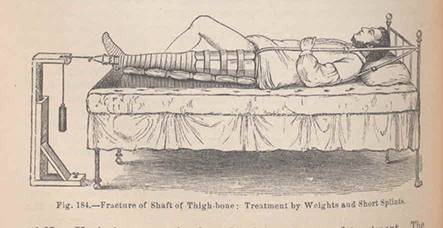 The collection includes books related to the study of medicine, such as herbal remedies, anatomy, mental health, and surgical practices from the late 1400s through the early 1900s. The collection also contains some volumes specific to medical practices in Michigan. 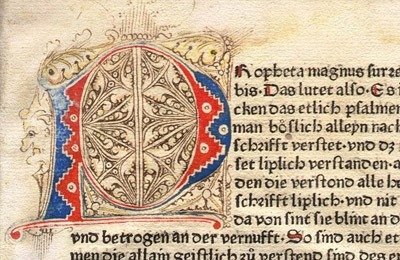 The term incunabula refers to books printed between 1450 and1500, approximately the first fifty years following the invention, by Johann Gutenberg of Mainz, of printing from moveable type. Our collection includes over 200 volumes and numerous unbound leaves from books printed during this period.

A Catalogue of Incunabula in the University Libraries Grand Valley State University Part One: Complete Editions 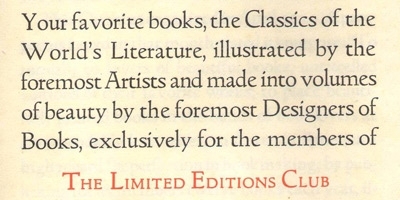 Limited Editions Club publications are a nearly complete accumulation of all the publications issued during the first sixty-five years of the Club's existence. It was founded in 1929 by George Macy, a New York entrepreneur and promoter of fine printing. The Club published a dozen books each year, each carefully chosen, edited, illustrated, and printed by renowned craftsmen and limited usually to 1000 copies. The books illustrated by Picasso, Rackham, Matisse, and Grant Wood are particularly noteworthy in this series. 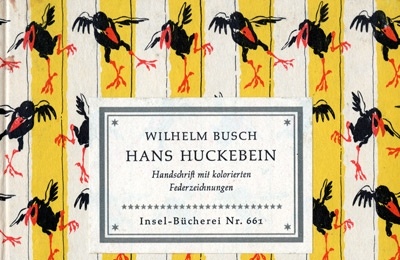 The German publishing company Insel Verlag was founded in 1899 by Anton Kippenberg in Leipzig. In its early years the firm only printed expensive, beautifully-produced volumes. Eventually demand led to the publication of the more modest Insel-Buecherei series in 1912. These smaller-format books were relatively inexpensive but had the same careful sense of design and typography. They included reprinted shorter works from a variety of German, European, and world authors. The series numbers considerably more than a thousand titles and is still being issued. 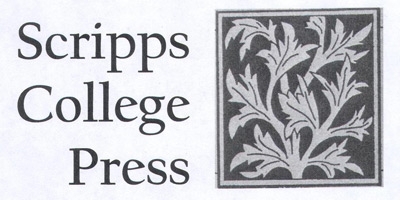 The Scripps College Press, located in Claremont, California, was founded in 1941 as an experimental typographic laboratory for art and graphic design students.  At that time a new typeface was commissioned from the renowned type designer, Frederic W. Goudy, for the exclusive use of the Press. Students set type by hand and printed various booklets and broadsides on a hand press. Today the students experience the complete process of creating a book from the initial conception to the final binding, including design, artwork, and printing. 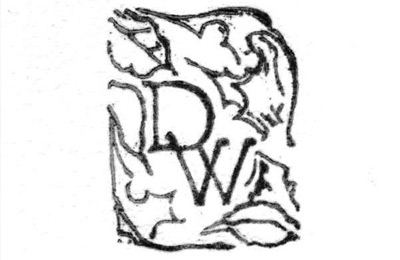 In 1992 Chad Pastotnik (B.F.A, Grand Valley State University) established Deep Wood Press along the banks of the Cedar River near Mancelona, Michigan. The studio employs a printing press and hand-set type to produce a variety of handcrafted books, broadsides, and other printed items.  Besides fine printing, the shop also engages in bookbinding, engraving, and linocuts. 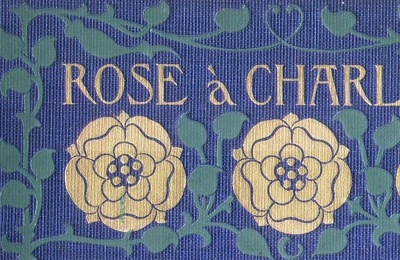 From the early 1870s to roughly 1930, many publishers issued their commercial book covers with a remarkable variety of graphic designs and illustrations. This sixty-year period saw many artists and designers contributing to this art form. While some can be identified from their style or initials, others remain unknown. 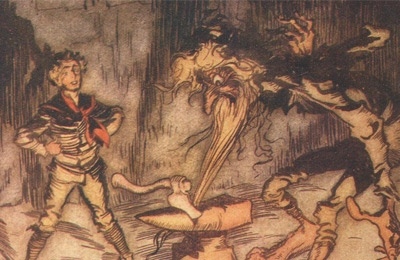 Illustrated Books includes a significant number of books illustrated by Aubrey Beardsley, Arthur Rackham, William Hogarth, and George Cruickshank. Illustrations by the contemporary master of wood engraving, Barry Moser, are well represented by many of the publications from his Pennyroyal Caxton Press. 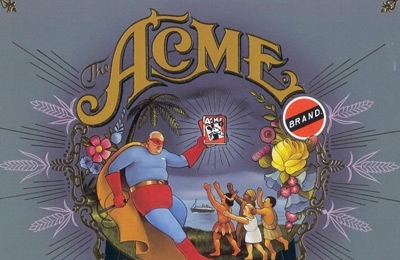 The collection contains a modest assortment of comic strips and graphic novels, for the most part concentrating on the work of two author-illustrators. George Herriman's (1880-1944) Krazy Kat , which ran in William Randolph Hearst's newspapers from 1916 to 1944, is considered to be one of the classics of the genre. More recently, the Nebraska native and Wisconsin resident, Chris Ware (b. 1967) has become known for his carefully-drawn graphic novels (e.g., his Acme Novelty Library series and Jimmy Corrigan ) that explore the anxieties of modern life. 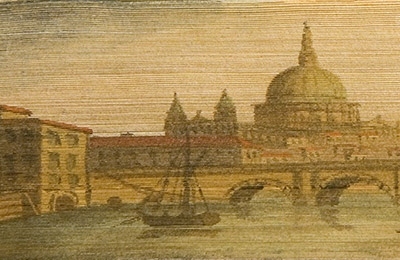 A fore-edge painting is a miniature watercolor painted on the fanned edge or edges of a book. When the book is closed the art disappears, hidden by the edge gilding. This genre of painting dates from the 1500s, flourished in the 1800s, and is still practiced today. Anonymous and undated paintings include landscapes, scenes and characters from literature, and portraits of authors. 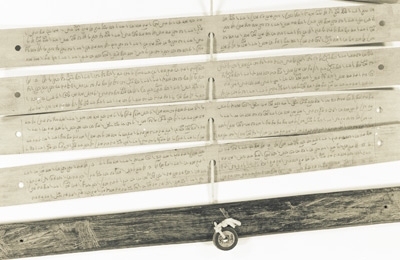 The Balinese palm-leaf manuscript (lontar) is made from dried palm leaves and bound between wood blocks by a cord running through the middle of the blocks and each leaf. A coin is tied to the cord. Translation of this document, conducted in 1973, speculates that this may not be authentic to the period (prior to the 19th century when printing presses were introduced), and may have been created for commercial purposes. The first 27 pages are lists of words seeming to bear no relationship to one another with a number of misspellings. Thereafter the subject is rice: the mythology of rice, the god of rice, and growing rice. 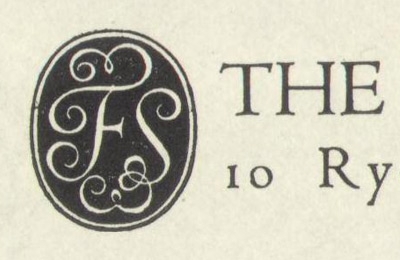 The Folio Society was founded in 1947 in London. Its aim was to make finely printed books on various subjects available to the general public by combining traditional typographic and artistic standards with modern industrial technology. The Folio Society continues producing books today. 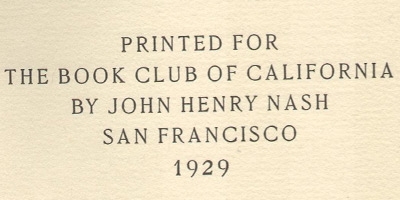 The Book Club of California was established in 1912 by bibliophiles and printers in San Francisco. It issues a variety of finely-printed publications, many of which deal with California history, literature, and politics. 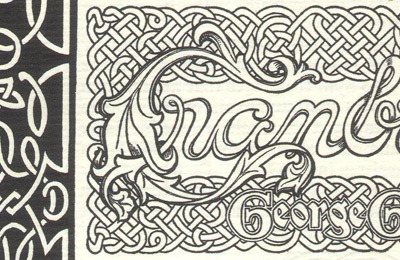 Cranbrook Press was established by newspaper publisher and philanthropist George G. Booth (1864-1949). It operated in Detroit from 1900 until 1902. Booth was an influential proponent of the Arts and Crafts Movement and he later established the Cranbrook Educational Community in Bloomfield Hills.

Michigan in the Novel 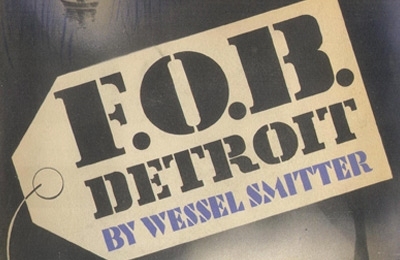 The Michigan in the Novel Collection is the most comprehensive collection of novels with Michigan settings existing in any institution. The collection comprises more than 2,600 titles with additional copies in different formats, editions, and bindings. The collection includes the first novel that used Michigan as a setting, Champions of Freedom (1816), Hemingway's first novel, Torrents of Spring (1926), and L. Frank Baum's rare Tamawaca Folks (1907) that he wrote under the pseudonym "John Estes Cooke." All genres of fiction are represented including juvenile literature, mysteries, romances, and science fiction. Visit ScholarWorks@GVSU to read Michigan in the Novel 1816 - 2006: An Annotated Bibliography, by Robert Beasecker. 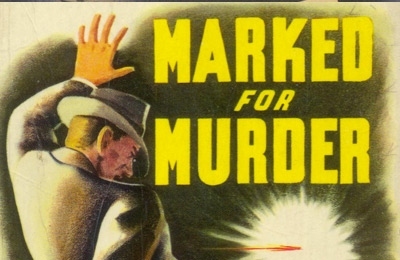 Mystery and detective fiction is represented by a variety of authors, including the French master of the genre, Georges Simeon. Other authors present in significant number include Agatha Christie, Dick Francis, J.J. Marric, Robert B. Parker, Ellis Peters, and Ed McBain. There are also a significant number of novels in the sub-genre "bibliomysteries," or stories about crime relating to books, bookstores, and libraries. 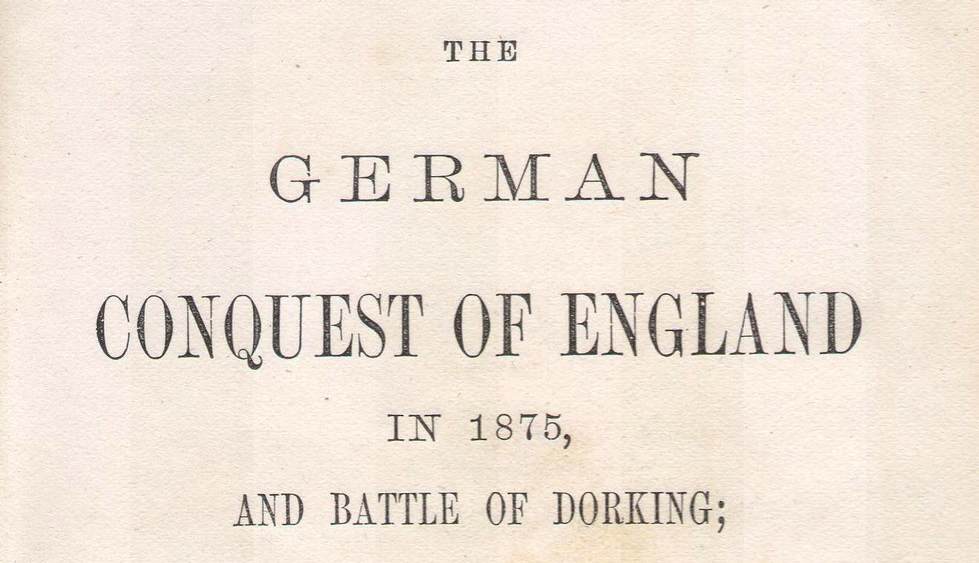 The literary genre of “imaginary wars and battles,” or novels and stories that feature fictional conflicts between nations, has existed since the 1700s. There are many reasons for these excursions into speculation. Some were written as warnings of what might befall a country if its armed forces were not adequately prepared for an attack by a hostile army. Some look at possible ways a future war might be fought with new weapons and the latest scientific advances. Others showed various scenarios of the conduct of war with specific enemies. More recently a sub-genre has emerged.  Alternate histories explore “what if” possibilities: What if the South won the Civil War?  What if the Japanese occupied the Hawaiian Islands?  What if the United States and Germany fought the Soviets in World War II? 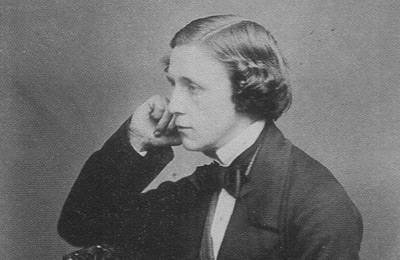 Lewis Carroll is the pseudonym of Charles Lutwidge Dodgson (1832-1898), an English author, mathematician, clergyman. The Lewis Carroll Collection, although concentrating mostly on Carroll's Alice in Wonderland and the variety of editions that were published over the years, also contains the author's other literary and mathematical books as well as significant biographical and critical studies on Carroll and the inspiration for his children's classic, Alice Liddell. 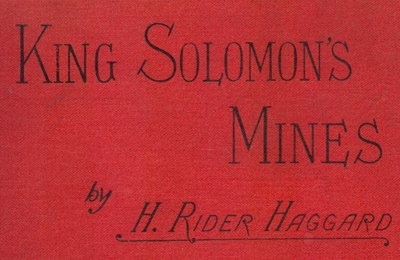 H. Rider Haggard (1856-1925) was an English author of a wide variety of popular adventure novels set in exotic lands, published in the late 1800s to early 1900s. He is best known for his novel King Solomon's Mines, and for his character Allan Quatermain, who has been resurrected in several movies and in the graphic novel, The League of Extraordinary Gentlemen. This collection includes Haggard's novels and literary analyses of his works. 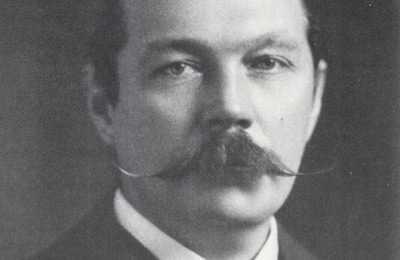 Sir Arthur Conan Doyle (1859-1930) was an English novelist of one of the most well-known detective characters, Sherlock Holmes. His works, which include such classic Holmes stories as A Study in Scarlet,The Hound of Baskervilles, and The Casebook of Sherlock Holmes, were published in the late 1800s to the early 1900s. Besides Conan Doyle's stories of his famous detective, this collection includes other works of fantasy and historical fiction, biographies and literary analyses of his work. 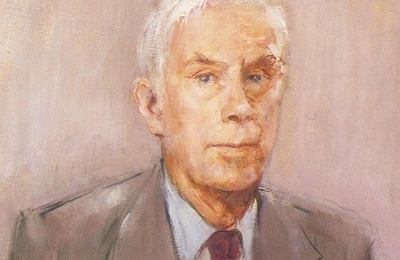 Anthony Powell (1905-2000) was an English novelist, reviewer, memoirist, and diarist best known for his twelve-volume sequence of novels collectively entitled A Dance to the Music of Time (1951-1975). This roman-fleuve follows the narrator, Nicholas Jenkins (Powell's alter ego), his friends and family from his schooldays, through service in the Second World War, to the early 1970s. It  is considered a masterpiece that depicts British society during the twentieth century. Present in the collection are a number of editions, both English and American, of the Dance. The collection includes Powell's other novels, diaries, essays, and memoirs. Also included are critical studies of the author and runs of periodicals published by two societies devoted to the study of Powell and his works. 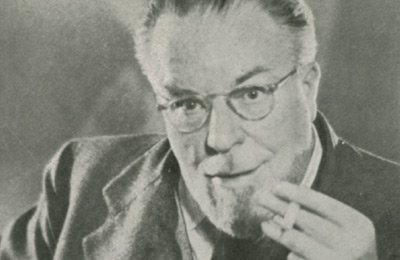 Christopher Morley (1890-1957) was an American novelist, poet, essayist, journalist, newspaperman, playwright, and literary editor. His sophistication and wit made him a popular author during the 1920s and 1930s. This collection consists of not only his literary works in many editions, but also some manuscript material and books about Morley.


Page last modified April 8, 2022
Report a problem with this page