The collections listed below contain materials related to general Grand Rapids and Michigan history. Materials may be accessed by request in the Reading Room in Seidman House. Contact Leigh Rupinski at (616) 331-8726 or rupinskl@gvsu.edu to schedule a research appointment. 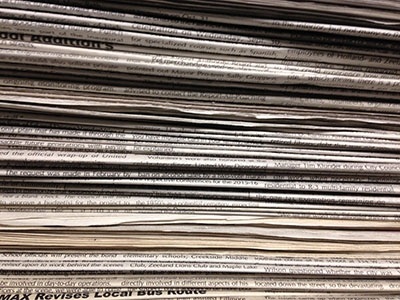 A collection of local community newspapers from the West Michigan region, spanning from 1930 to the present day. The newspapers relate to local business, ethnic, social, religious, and political communities. 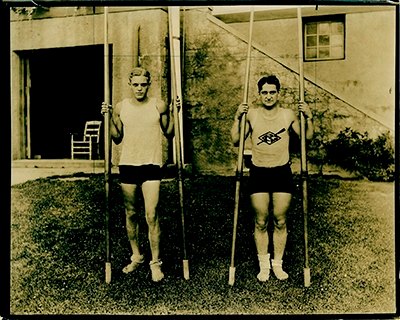 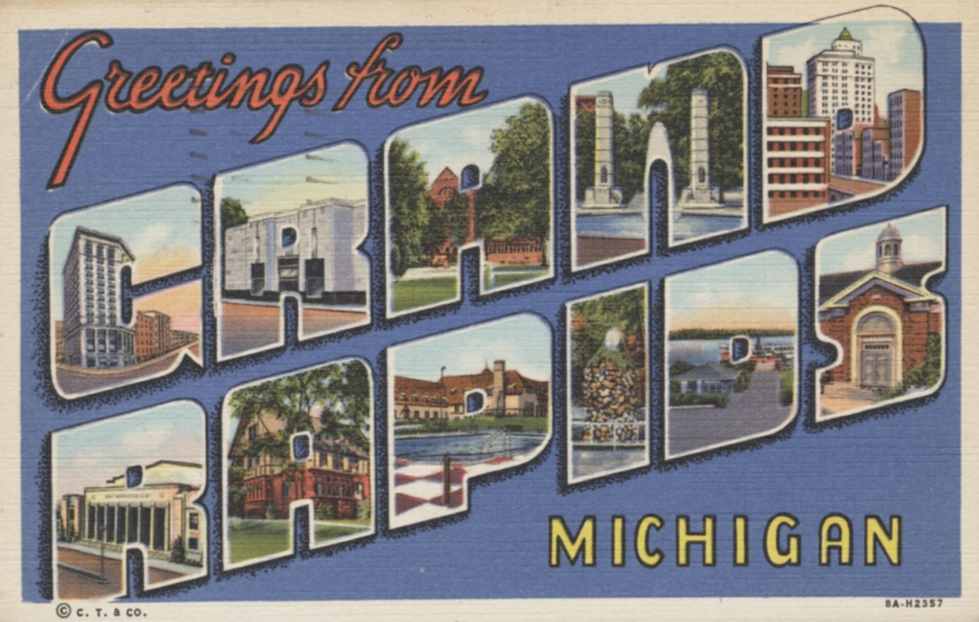 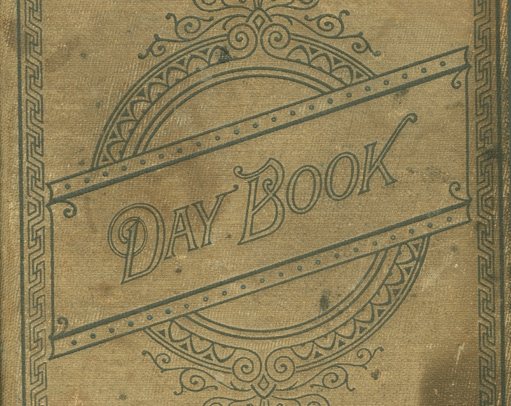 David M. Austin was a carpenter in Elsie, Michigan (Clinton County). He enlisted as a private in Co. B, 8th Michigan Cavalry on 13 August, 1864. He was born in 1845 and died in 1935. He was married to Allie Mudge, who died in 1919. Handwritten diary maintained by David M. Austin of Elsie, Michigan.  The diary is written in a day book. Entries begin on January 1, 1913 and conclude on December 31st 1916.  Austin records the details of his everyday life including the weather, his work around the farm and jobs he is hired to do, and details of friends and family. 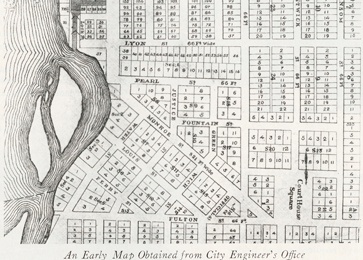 Series of five scrapbooks containing newspaper clippings and articles from local Grand Rapids, Michigan’s newspapers focusing on the history of the city, its people, places, and events.  The collection includes clippings about the election of Grand Rapid’s first black mayor, the demolition of historic buildings, celebrations, and public transportation within the city. Scrapbooks also contain some printed photographs and brochures. Extensively included are historical columns from The Interpreter, a weekly Grand Rapids newspaper, called "Those Were the Days" by G. Harrington, and from the Grand Rapids Press, 1968-1975. One volume (#2) includes Grand Rapids Press columns of "The yesterdays of Grand Rapids" by Charles E. Belknap, his obituary in 1929, and a program from dedication of memorial statue on Dec. 26, 1931. 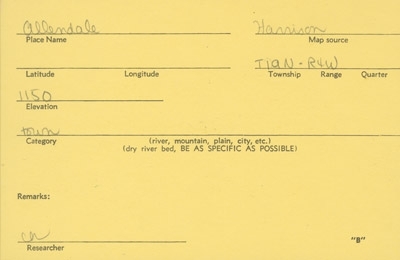 Card index of place names used as an authority file by the United States Department of the Interior in the Geological Survey in the 1976 Topographic Maps of Michigan project. Grand Valley State faculty Robert Alotta created these cards with student assistance. The card index of Michigan place names may include the following fields of information: Place name, map source, latitude, longitude, elevation, township, range quarter, remarks and researcher initials. Each card also has a category for the type of place (river, mountain, plain, city, dry river bed, church, lake, railroad). 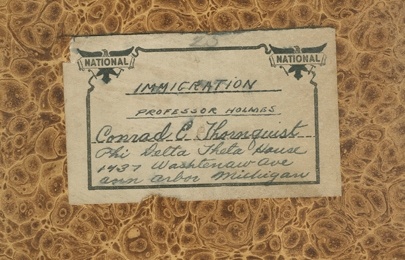 Conrad Thornquist was a Michigan native who attended the University of Michigan as an undergraduate and attended Harvard Law School in the Class of 1931. His papers include handwritten and bound class notes from his Harvard Law School coursework with annotations, newspapers with headlines of significant events, and picture postcards and art cards from European travels. The collection also includes Justice Court docket book from Ottawa County, Michigan, Oct. 22, 1849–April 3, 1862; and a memorial scrapbook for Claude C. Hopkins, former head of Lord & Thomas advertising agency. 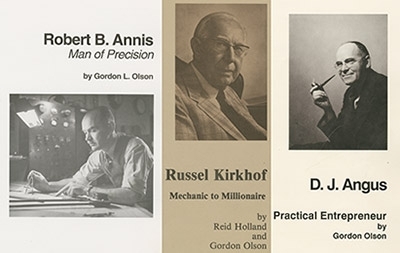 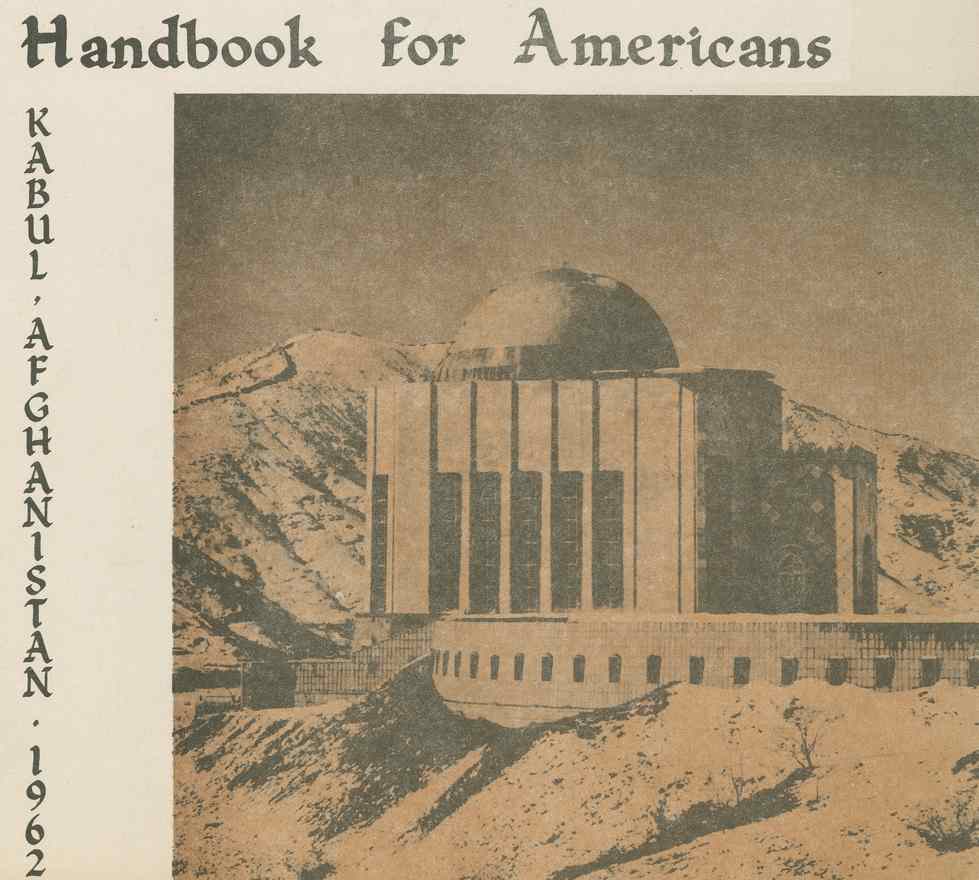 Frank J. Schulte is known as the Father of Civil Service in Grand Rapids, Michigan. Schulte worked in civil service throughout Michigan and on the proposed personnel system for the royal government in Afghanistan in the early 1960s. The collection includes materials from Grand Rapids and other Michigan cities, budget reports, civil service board files, newspaper clippings, and Public administration reports from Afghanistan. 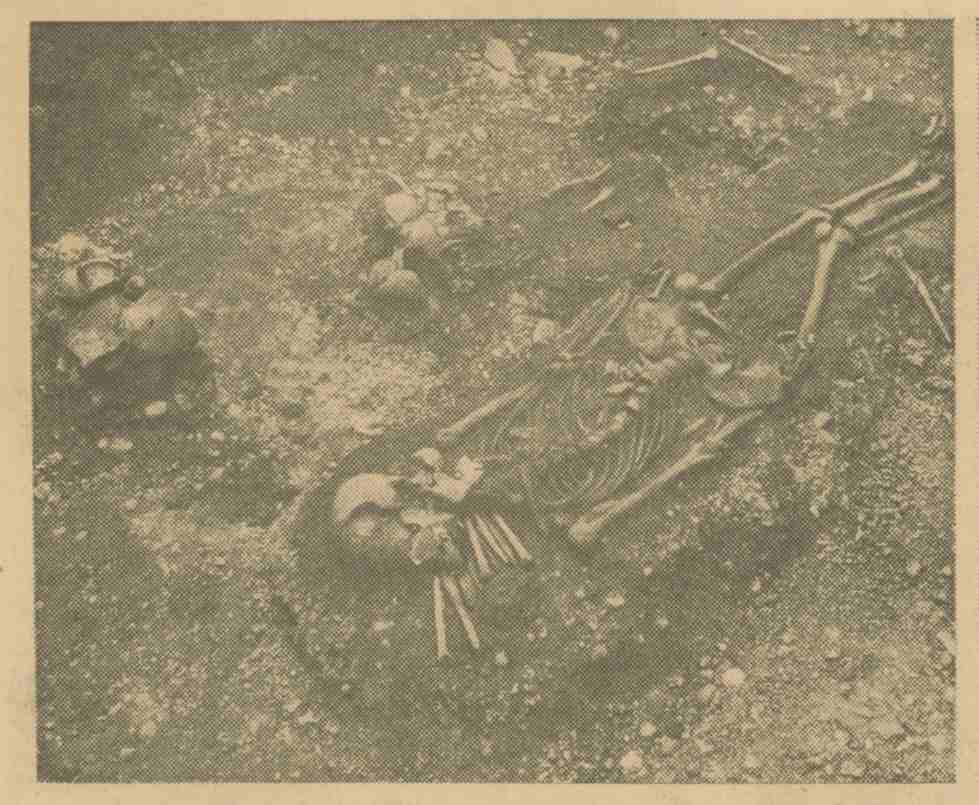 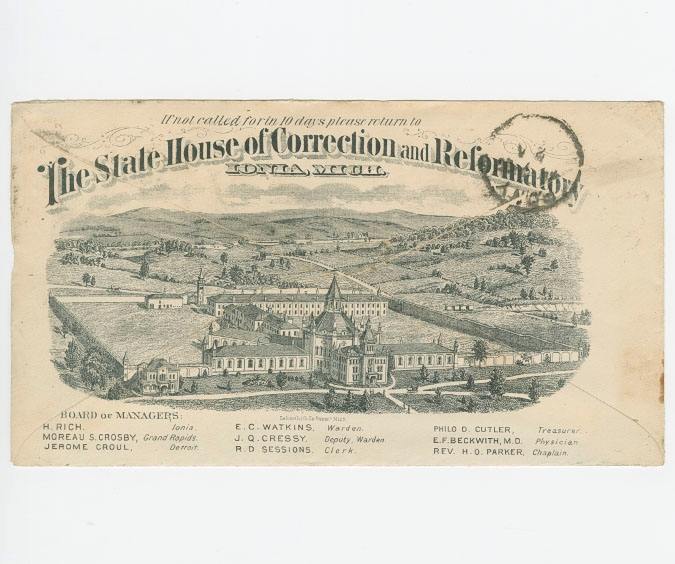 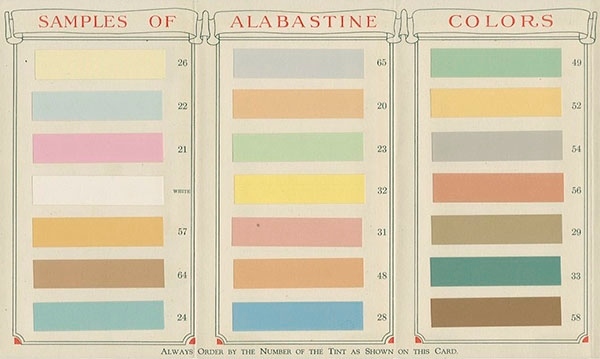 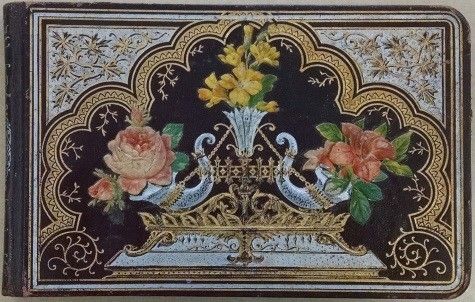 Although dating from the middle ages, the autograph album became very popular in the latter part of the 19th century. They were used to collect signatures of family members, friends, neighbors, and classmates and often displayed examples of fine penmanship, personal sentiments, verse, and drawings. Many varieties of commercially-available albums were produced, often with color lithograph vignettes on some pages; format was usually oblong with the average size being about 4½ x 7 inches. Examples in this collection were all owned by Michigan residents. 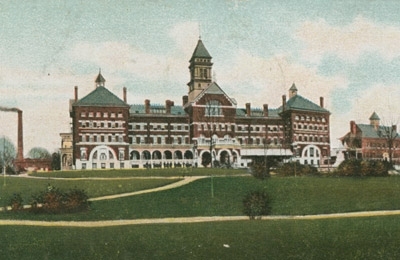 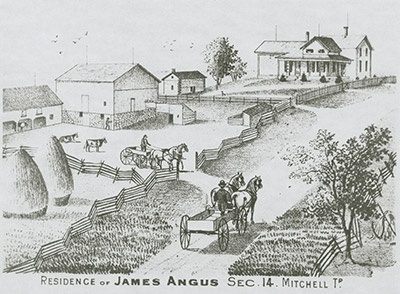 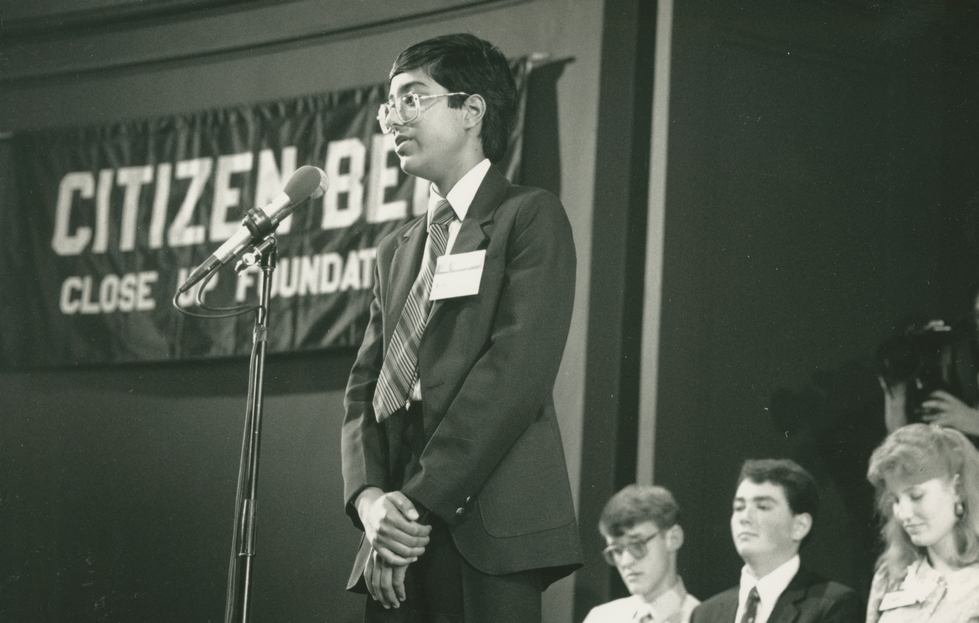 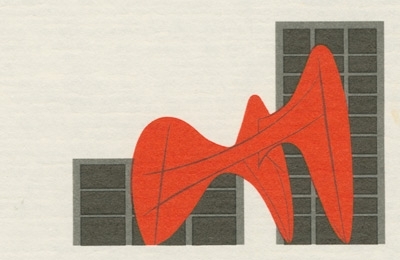 The documentary film produced by William Lawson, La Grande Vitesse: The Work of Alexander Calder, which was erected in downtown Grand Rapids, Michigan. The film follows the unloading of the stabile pieces in Detroit where it was shipped after being created by Calder in Paris , its construction in downtown Grand Rapids, Calder’s arrival in the city, and several interview pieces on Calder’s life and work. The collection contains 16mm film reels, an audio CD of interview and lecture material from Klaus Perls and Sweeney, and a DVD of the completed documentary. 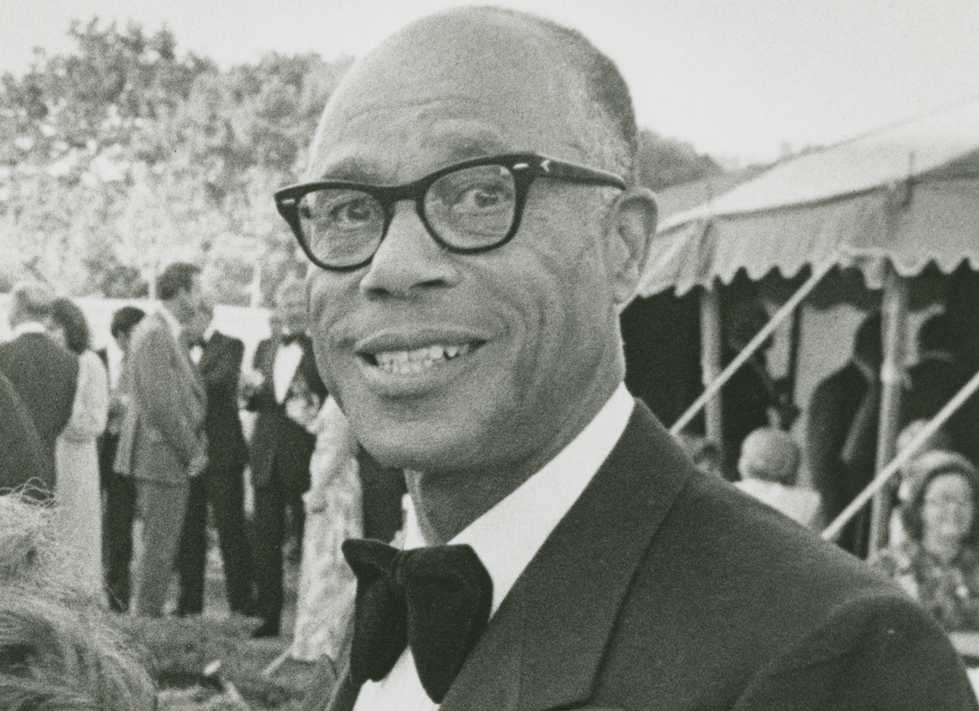 Paul Phillips was a prominent African-American community service leader and was the first African-American to hold elected office in Grand Rapids. The collection includes biographical information, copies of speech notes and testimony, writings, newspaper clippings, and magazine articles from 1947-1980 about blacks in America. 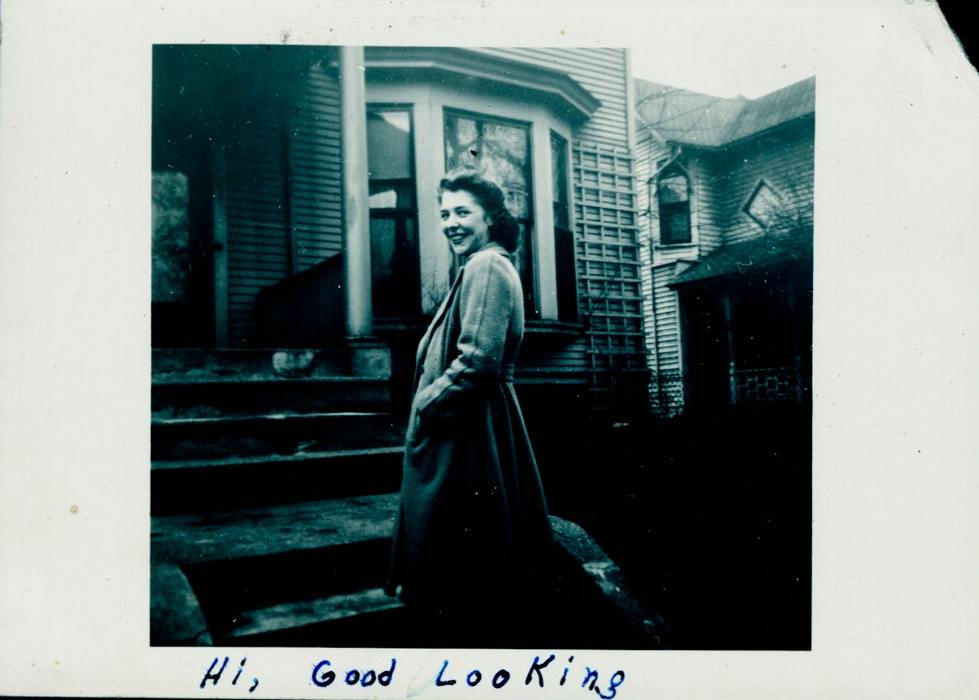 Florence Ruth Williams was born in November 1922 in Grand Rapids, married William Carl Jackson in 1942. The collection contains one scrapbook of ephemera and personal memorabilia of Grand Rapids Central High School from the late 1930s, where Florence Williams was a student; and two photograph albums containing nearly 300 black and white photographs, mostly of Florence and William Jackson, dated around 1940. 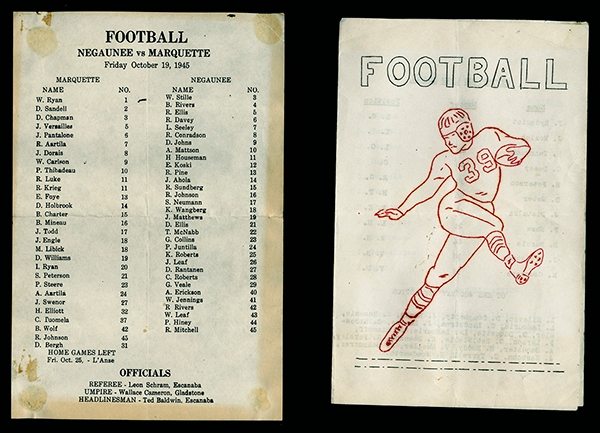 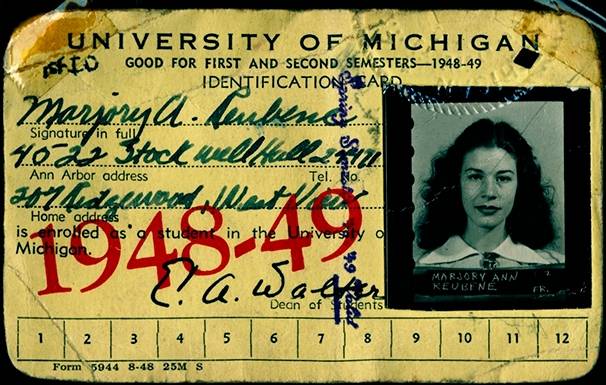 Marjory Ann Reubene attended the University of Michigan from 1948-1952, and graduated with a B.B.A. degree in personnel. The scrapbook contains letters, invitations, dance cards, playbills, university publications, greeting cards, newspaper clippings, notes, postcards, and other ephemera affixed to leaves with cellophane tape. Most of the materials relate to the educational and social experiences of Marjory Reubene during her first two years in attendance at the University of Michigan. 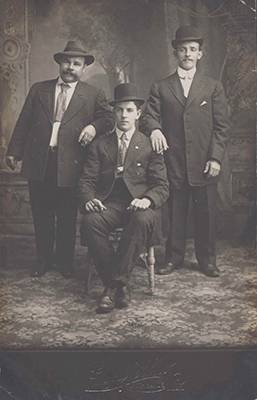 A postcard album comprised of 42 black-and-white photographs, mostly Real Photo Post Cards (RPPC); 25 are stamped "[William J.] Goodfellow" and one "[John H.] Taylors Studio." Both photographers were located in South Range, Michigan. Nearly all the photos were taken indoors in a studio and are of women alone and groups of women, men alone and groups of men, children, and dogs. Two were taken outdoors. The location is most assuredly is in or the vicinity of the Upper Peninsula town of South Range, Michigan, a copper mining area just a few miles south of Houghton. Photo dates range from 1905 to 1915. 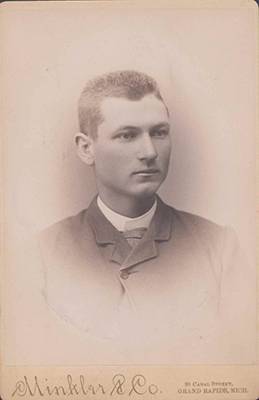 A photograph album containing 30 black-and-white cabinet card photographic portraits and six loose photographs, taken roughly from 1880 to 1900, most of which carry imprints of Grand Rapids photographic studios. Also includes remnants of watered silk endpapers, containing extensive genealogical notes concerning the Robertson and Curry families. The Robertson and Curry families immigrated to the United States from Scotland and Ireland respectively, and by the 1870s had settled in Allendale Township, Ottawa County, Michigan on farms. The Robertsons had 160 acres in the southwest quarter of section 22, and the Currys had 80 acres in the northern part of section 36. The two families are connected through the marriage of Isabella Robertson (1868-1937) and Robert Curry (1868-1929) in May of 1889. They had three children: Raymond George Curry (1889-1966), Nelle A. Curry (1894-1987), and William Albert Curry (1897-1953). 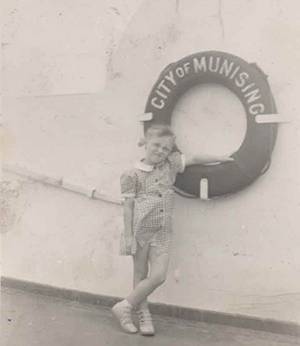 Sue Carol Willson (1936-1992) was born in Saginaw, Michigan and married Robert L. Ortman (1929-1999), also a resident of Saginaw, most likely in 1955. This collection contains a photograph album comprised of 37 black-and-white photographs of the Willson family’s trip to the Upper Peninsula of Michigan in the summer of 1940. Scenes include the passenger ferry "City of Munising," views of lakeshores, camping, Copper Harbor, churches, and Tahquamenon Falls. In addition, there are 23 loose photographs, of which three are in color. Most are of the Willson family, 1928-1948, and nine date from 1957-1959 after Sue and Robert were married. Locations include Saginaw, Thompsonville, and Big Star Lake (Lake County); most have captions. 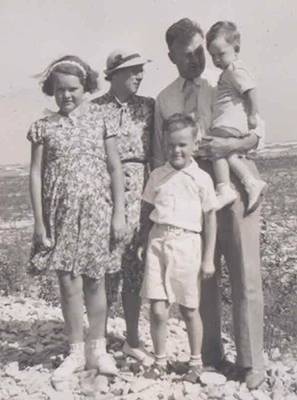 Reverend Otto Martin Andrew Riedel (1902-1965) was pastor of the Trinity Lutheran Church in Jackson, Michigan from 1933 to 1965. This collection contains a photograph album of 400 black-and-white photographs documenting the Riedel family during their residence in Jackson, including the exterior of their home and Trinity Lutheran Church, outings and vacations throughout Michigan and other locales, and gatherings with relatives and friends. Children's milestones include Richard's high school graduation and Linda's graduation from nursing school. Also included are photographic Christmas greetings from friends. 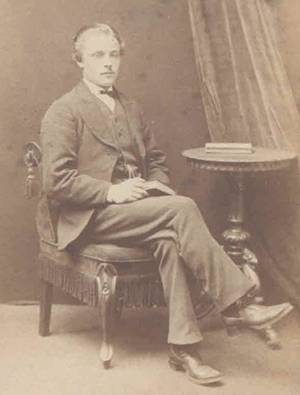 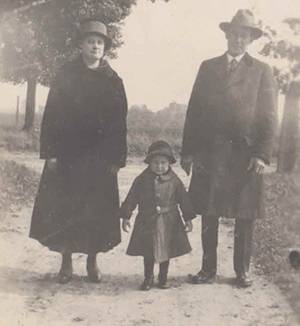 This collection includes a photograph album which contains 31 cyanotypes and 71 black-and-white photographs assembled by Eliza (Lila) E. Whitfield Smith (?-1956) from ca. 1919 to 1923. Besides family, friends, and neighbors, subjects include scenes in Detroit, Michigan: Detroit River, Water Works Park, and Belle Isle; Hudson, Morenci, Medina, Ames Mill dam, Prospect and Catholic Hills, the Wheatland cyclone damage, farm views, cemeteries in Morenci, Hudson, and Pittsford; other than the Detroit photos, the rest were taken in both Hillsdale and Lenawee Counties, Michigan. Also included in this collection are correspondence and ephemera, dating back to 1882, as well as information on Morenci Union Schools. Eliza married Miley J. Smith in November of 1906 and following the death of Edward Whitfield (1832-1916) gained ownership of Edward’s 80-acre farm in Pittsford Township. Together they had one child, Mahlon Vaughn Smith (1917-2006). 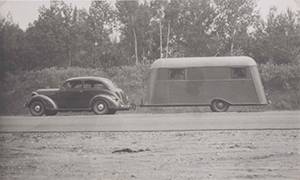 Gladys Dora Hillman (1916-2015) was born in Lansing, Michigan, and worked as a clerk for the Oldsmobile auto factory in Lansing until at least the mid-1950s. She later worked for the State of Michigan before her retirement in 1975. This photograph album contains 29 black-and-white photographs documenting a road trip (with house trailer) taken by Gladys Dora Hillman and two other women in August 1939 from Lansing, Michigan, to various locations in northern Michigan. Michigan locations visited include Houghton, Harrison, Cheboygan, Gaylord, Mackinaw City, Mackinac Island, St. Ignace, Sault Ste. Marie, Traverse City, Beulah, and Lansing. 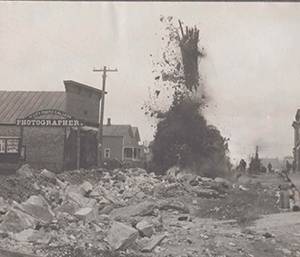 Edward Nequette (1872-1945) worked as a photographer in Manistique, Michigan, from 1904 to 1913. This photograph album, created by Nequette, contains 154 black-and-white photographs covering a variety of subject in and around the Manistique area, including ships, nearby attractions, local industry, and groups and individuals, and houses from the years 1905 to 1913. By 1907 Edward had a partner in his photography business, his nephew Edward Odelion Brault (1880-1962), the son of his sister Lucy. When Edward Nequette left Manistique before 1913, his nephew continued with his photography career in that city until at least 1940. By 1918 Edward Nequette and his family were living in Ionia, Michigan where he was employed as a metal worker at the Hayes-Ionia Company, and continued in that field until at least 1940. 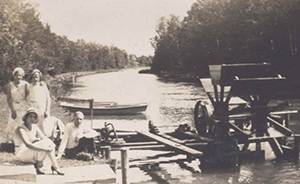 Vida Annette Plourde was born in Vulcan, Dickinson County, Michigan in 1901. She was the eldest of seven children born to Joseph Dona Plourde (1873-1936) and Lydian Sarah Belrose Plourde (1881-1947). In 1920 Annette was living at home with her family and was employed as a clerk in the local post office. By 1930 she was a teacher at the high school in Channing, Michigan and boarding with a family in nearby Sagola. It appears she attended Western State Teachers College (now Western Michigan University) in Kalamazoo in 1931. Annette married Hollis Abner Stenshoel (1901-1981) in Vulcan on 20 June 1936 and the couple relocated to Green Bay, Wisconsin where Hollis was a clerk at the Beaumont Hotel in Green Bay. This photo album, created by Annette, contains 212 black-and-white photographs, consisting mostly of the Plourde family and friends in Vulcan, including family reunions; various trips and outings to Beulah and Crystal Lake, Michigan (1931), Maine, New Hampshire, Massachusetts (1931), Breezy Point, Minnesota (1932), Hamilton Lake (1933), Marinette, Wisconsin (1933), and Pennsylvania (1935). Photos range from 1927 to 1936.