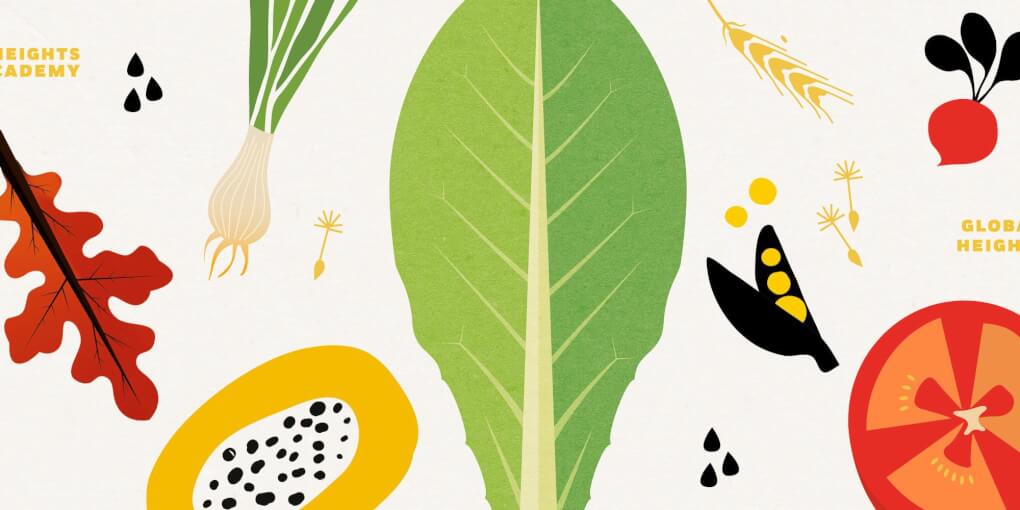 Growing food, minds in the desert

Of the nearly 300 students who attend Global Heights Academy in Dearborn Heights, a vast majority live in a desert.

No, there is no arid microclimate just west of Detroit in Wayne County, but there is a food desert, and a substantial one. According to principal Shawn Robson, most of his students in the Grand Valley-authorized charter school live in poverty and live more than one mile from a supermarket, meaning they live in a food desert, as determined by the USDA.

Because of this, Robson and a team from Big Green, a national nonprofit organization, are working to change how these students, who often struggle with food and nutrition, understand how food interfaces with their lives and their learning.

Global Heights Academy is the first of 100 Detroit-area schools that will get new learning gardens as part of a $5 million initiative from Big Green. Several Grand Valley-authorized charter schools are leading the way as pilot sites for the program. A total of eight of Grand Valley’s charters in the metro Detroit area will end up with the gardens. 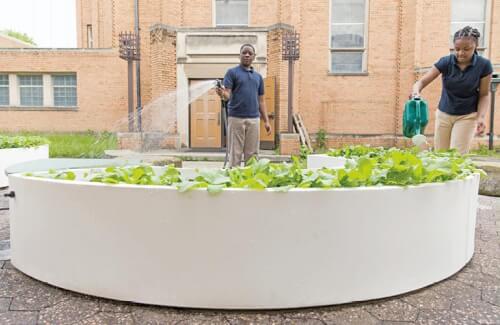 The idea is to create learning spaces where kids can get hands-on with plants in hopes that it will change their preferences for healthy food, develop healthier responses to stress, and also improve their academic performance and overall health and nutrition, said Ken Elkins, regional director for Big Green in Detroit.

The program started at Global Heights Academy in late spring, and the learning garden there has shown substantial development, with lettuce, peas, beans, kale, and radishes all growing well, thanks in large part to the students who participated in planting and maintaining the garden.

Jamya Matthews is a fifth grader at Global Heights and has taken a keen interest in the learning garden. “When we first planted the garden, it was a lot of work. We had to bring in the big bags of soil, and then we had to break up the clumps because it was cold, but it’s cool to see how everything is growing,” Jamya said.

Mamadou Doumbouya is another fifth grader at the school, and while he has a garden at home, he said that having the learning garden at school helps him think more about what he is eating. He said he thinks about what is inside of the plants and where it comes from rather than just knowing that it’s healthier than fast food or a snack from the convenience store.

“I try to use it on nice days, get the kids outside to learn. In the first five minutes I will let them just explore and see what has changed. Then we’ll get down to discussing how food supplies played a role in the Revolutionary War or a science lesson about the parts of plants.”

“I thought the new garden was cool because when most of the kids here go home they just play games and eat whatever, but with the garden here at school they can go home and think about what they eat,” Mamadou said.

That conscious thought about what to eat is showing in students across grade levels, Robson said.

“I see a shift in wanting to eat healthier foods — I don’t think that’s a coincidence,” Robson said. “We have 100 percent free and reduced lunch here, and all of our kids live in poverty. The easy breakfast for them is to stop by the local 7-11 and pick up a bag of chips. Having them see this garden in action and to be able to sample some of these items, these kids can say, ‘Wait, these are growing in our garden.’ It’s changing the mindset of our kids to think twice about that bag of chips compared to other options they may have.”

Elkins said another benefit of installing community gardens is that students often transfer what they’re learning about nutrition and healthy eating to their families, maximizing the impact of the program to a broader community.

“All of our students taste and eat the vegetables, but they also take them home, that’s a huge added benefit,” Elkins said. “When the food goes home with the students or the parents, that is a massive improvement to the health of that family. They’re growing food they can use.” 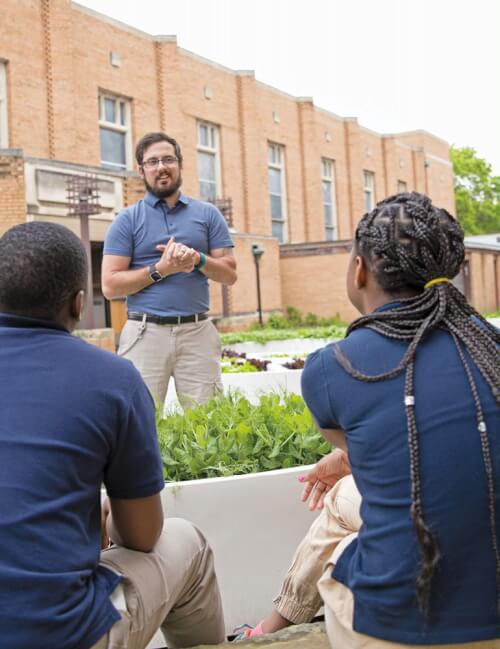 Robson said the school held a harvest day and students ate what they had grown, and had opportunities to take food home to their families. During the summer break, the gardens were maintained by a local healthy living program, Leaders Advancing and Helping Communities.

The school is serious about trying to get families on board as well. Josh Hendrickson, a fifth-grade teacher, planned to send recipes home with students so when families try specific kinds of produce for the first time, their first exposure will be tasty because it was prepared properly.

Hendrickson used the garden to change the way he’s teaching. He incorporated the garden into lessons on subjects ranging from language arts and social studies to science.

“I try to use it on nice days, get the kids outside to learn. In the first five minutes I will let them just explore and see what has changed, and let them check on the plants they put in, then we’ll get down to discussing how food supplies played a role in the Revolutionary War or a science lesson about the parts of plants. There’s lots of opportunities here,” Hendrickson said.

He hopes to be able to track growth rates and other data during the next growing season to teach a math lesson about graphs and finding information from data.

Whisk together the lemon juice, olive oil and 1/4 teaspoon salt in a large bowl. Add the kale, toss to coat and let stand 10 minutes. While the kale stands, cut the dates into thin slivers and the apple into thin matchsticks. Add the dates, apples, almonds and cheese to the kale. Season with salt and pepper and toss well.

Hendrickson said he thinks the biggest benefit is having students understand that growing food is a process, not something that happens overnight.

“We’re blessed in this country to be able to go to the supermarket and buy basically whatever we need whenever we need it,” Hendrickson said. “I think this helps show them that there’s a lot of work and time involved in the process of feeding people.”

The students are genuinely excited about the garden. While walking to her music class, Jamya, the fifth-grader, bent down to inspect a plant before she loudly exclaimed, “I can smell this lettuce, Mr. Hendrickson!” to her teacher.

Hendrickson said giving the students a chance to get their hands dirty and letting them follow the growth of the plants has changed their perspectives. “There’s a lot of buy-in to this project,” he said. “The kids are in awe every time they come out here.”

Robson said that besides hands-on learning, he’s seen behavioral improvements as well, and thinks the garden is at least partly responsible.

“We’ve seen a shift in behavior and climate and culture,” Robson said. “I think having a physical stake in a project at school is providing these students a real sense of ownership and pride. They remember where they put their seeds in, and will run to that space and they’ll say, ‘This is mine, this is the one that I planted,’ and it’s changing the way they’re approaching school.”

Other Grand Valley charter schools will see their learning gardens installed throughout the year as part of the pilot program. Grand Valley’s Charter Schools Office leadership is excited to see this innovative program get off the ground.

“These state-of-the-art gardens provide an innovative learning opportunity and also an important connection with our schools’ communities,” said Rob Kimball, associate vice president for charter schools. “Through this project, students will get to work together to create something spectacular and share it with their friends, family and people from their neighborhoods. We’re excited to see what grows from this.” 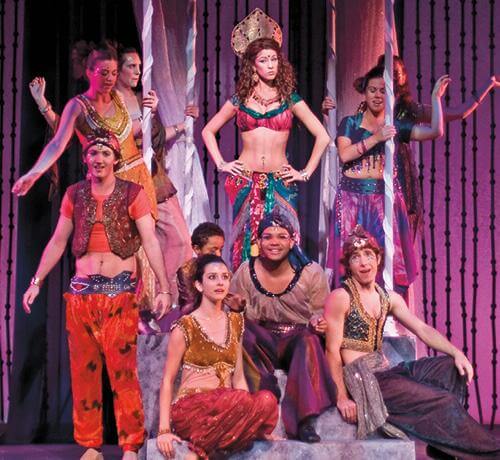 The Grand Valley Shakespeare Festival is the oldest and largest festival in Michigan celebrating the Bard's life and works. Every year, festival events attract thousands of people of all ages. 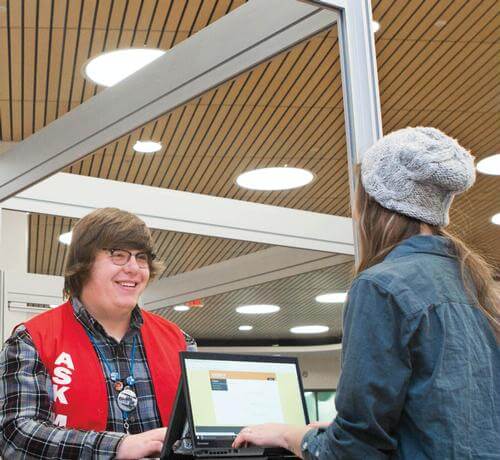 The Knowledge Market is staffed with trained students who are ready to help their peers with papers, research projects and presentations.