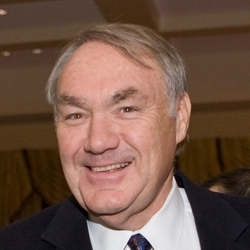 Michael (Mike) Lloyd worked in the newsroom of The Grand Rapids Press for more than four decades. He was editor in chief for 33 years. Committed to the vitality of the Grand Rapids region, he started, promoted, and recognized many positive local initiatives at the Press, including the dramatic growth of Grand Valley from a single-campus college to a major regional university. He currently is executive director of Broadway Grand Rapids, bringing the national tours of Broadway shows to DeVos Performance Hall. Lloyd served and continues to serve in leadership positions on many community boards from Mary Free Bed Rehabilitation Hospital and Saint Mary's Health Care, to Junior Achievement of West Michigan, the Girl Scouts of West Michigan Shores, Opera Grand Rapids, and Celebration on the Grand. He is a member of the Grand Rapids Community College Foundation and has served for more than 31 years on the Grand Valley University Foundation board. Lloyd has also taught at Grand Valley, and was awarded an honorary doctorate by the university in 2009 for his service to the community.