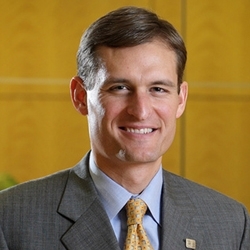 John Bultema III earned a bachelor's in finance from Grand Valley State University in 1995, and a Master of Business Administration from Western Michigan University in 2004. He is a graduate of Mona Shores High School and attended Muskegon Community College prior to coming to Grand Valley. He is currently the President and CEO of The Lafayette Life Insurance Company, a member company of Western & Southern. Prior to joining Western & Southern, Bultema had a 22-year career at Fifth Third Bank and Old Kent Bank, where he held a variety of leadership positions, including regional president and chief executive officer. He became Fifth Third's youngest bank president at age 34, taking control of the banking operations headquartered in Orlando.


Page last modified November 5, 2019
Report a problem with this page