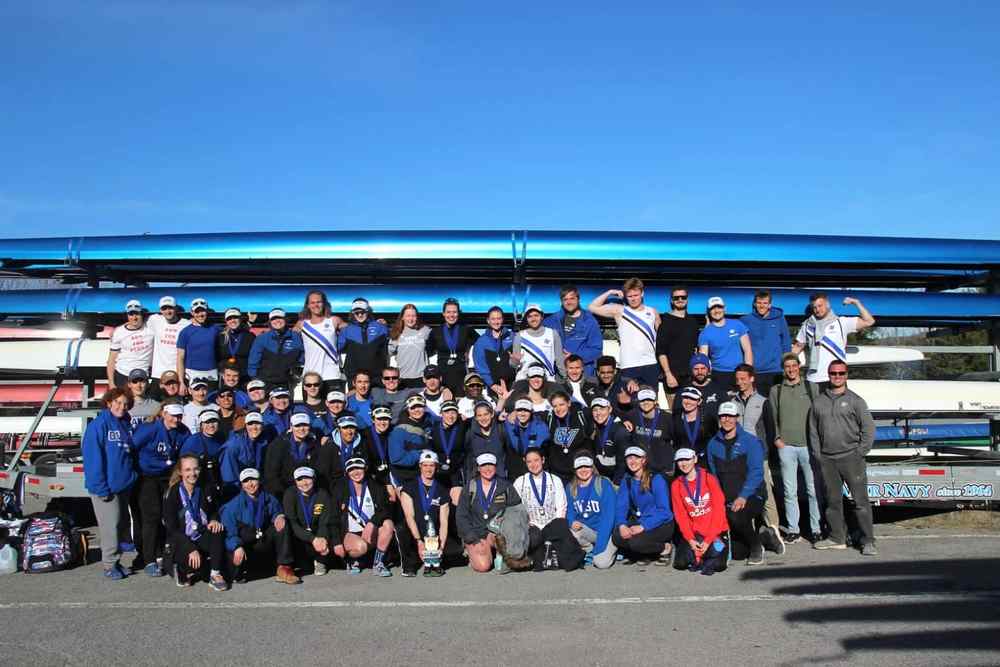 After nearly three years since their last spring regatta, these past two weekends the Laker Navy has finally found themselves facing off against other teams once again. On Saturday, March 26th, Nashville Rowing hosted nearly 30 masters, collegiate, and junior rowing teams at Percy Priest Lake. After a long winter season, and even longer without racing, the athletes were itching to go head-to-head with other crews. It was an exciting day for coaches, rowers, and coxswains alike as it was the first time that many teammates finally experienced a true spring race!

The long and windy day of racing began at 7:20am with the Varsity Men’s 8+ heats. Taking 3rd place, GV’s crew guaranteed themselves a spot in the grand final later that afternoon. During the Varsity Women’s 4+ heats, the A and B crews came in 1st and 3rd place in their respective races, both advancing to the grand finals. The Novice Men’s 8+ also advanced with a first place finish, and the Novice Men’s 4+ A and B crews earned first place in their heats, the C boat taking fourth in theirs. The Varsity Men’s 4+ A crew secured an advance to the grand finals, finishing third in heats. The Varsity Women’s 8+ A and B also advanced to the grand finals with a first and second place finish in their race. The novice women had quite a successful morning of racing as well! The 8+ finished in second place and the 4+ in third, the crews taking home silver and bronze medals, respectively.

After a long morning full of preliminary racing, athletes took a midafternoon break before launching for their finals. The break was spent skipping rocks on shore, soaking in the sunshine, visiting with the friends and family who had come to support the team, resting in the bed of the trailer, and re-fueling with all the delicious food provided by the parents. Towards the end of the break, news came from regatta officials that some races had been canceled or delayed due to the windy conditions. After receiving the new launching schedule, coxswains marshaled their crews to lay down their last race of the day and brave the elements once again.

These last races were some of the windiest, waviest, yet most successful of the day with many of the crews taking home some hardware. The Varsity Women’s 4+ A took gold in the grand finals, and both Varsity Women’s 8+ crews swept the rest of the competition, finishing first and second place on the podium. The Novice Men’s 4+ crews also swept the board, the A and B boats taking gold and silver, respectively. The novice men also had a resounding victory in the 8+, taking first place with a 35 second margin! Full results can be found on Crew Timer Regatta Timing https://www.crewtimer.com/regatta/yvzpjjnh.

On Saturday, April 2nd, the Laker Navy gathered at Riverside Park in Grand Rapids, MI for the 25th annual Don Lubbers Cup Regatta. Hosted by Grand Valley, teams from the University of Notre Dame, Northwestern University, Case Western Reserve University, the University of Michigan, and Purdue University ventured out to Grand Rapids for some friendly competition. With this race much closer to home than Nashville, many friends, family, and alumni of the Laker Navy came out to support the team. The location at Riverside Park offered a close view of the finish line so that all athletes could hear their families and friends cheering them on as they approached the end of the 2k course. While the day was a bit chilly for these spectators, thankfully the forecasted rain held off until racing was concluded later that afternoon.

The regatta was structured as two rounds of duels or tris, each crew facing different competition for each race. During the first round of racing, the Varsity Women’s 8+ 1V and 2V crews beat their competition of Case Western’s 1V and Purdue’s 2V, respectively. The Novice Men’s 8+ came second place to Purdue’s 1F by just 1.7 seconds. Other notable finishes from this first round of racing include the Varsity Men’s 4+ taking first against Notre Dame, and the Novice Women’s 4+ finishing ahead of Case Western’s crew by 8.4 seconds. Once the first round of racing was complete, crews met on land to discuss how their race went and plan improvements for their second of the day. Athletes also had time during the break to eat some warm food at the parent’s tent, visit with their supportive families, and say hi to the many regatta dogs walking in the park!

After refreshing their minds and bodies, athletes commenced the second round of racing around 1pm. The Varsity Women’s 2V8+ had another successful race; finishing far ahead of the Purdue and Northwestern 1F crews, they secured the gold medal in the Women’s 2V8+ category! The Varsity Women’s 1V8+ fought a hard race against Purdue’s 1V, finishing second by only 0.8 seconds. Motivated by their 1.7 second defeat in the first round of racing, Grand Valley’s Novice Men’s 8+ came back to beat Purdue’s 1F in round two with a time of 7:02.5, making them the overall winners of the Men’s 1F8+ category. With the women’s success in the 1F4+ and 2V8+ categories, Grand Valley took home the Women’s Team Point Trophy. At the end of the day, each athlete walked away with their head held high, knowing they had given their all to racing and looking forward to continual improvements as they train for the Triple Crown Regattas in May.

Assistant varsity coach, Troy Harding, felt a sense of pride and accomplishment as he watched the athletes compete in these first races of the season. He says, "I think these early regattas, and the spring season as a whole, is like a high school freshman trying to find out who they truly are as a person (cue Disney Channel Original Movie). We did well at Nashville but the boats are still unsure of themselves when it comes to technique, speed, and potential. Juggling regattas, water technique (versus ergometer winter-dungeon-blandness), seat racing, and boat placement are a lot to handle. But we are slowly working out the flaws week by week and getting settled into a new norm and subtle confidence. These 'beginning of spring' regattas serve to gauge ourselves against ourselves, as well as noteworthy contenders; but after a long stretch of focused weeks, we will be able to show our competitors and - more importantly - ourselves what our potential is." He is determined to continue pushing and growing the athletes to their fullest potential as the Laker Navy continues its spring campaign.


Page last modified April 5, 2022
Report a problem with this page