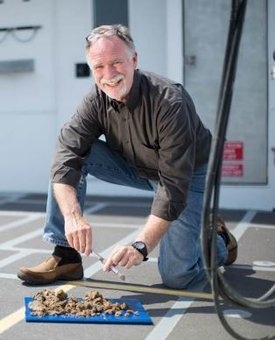 Using radio telemetry to track nearly 35 different brown trout for more than a year, we are starting to determine where these fish prefer to live and how they move throughout the Au Sable River. The data suggest that fish have one preferred daytime location and one nightly feeding site a short distance away. During warm months, fish will leave their preferred site to find colder water which has implications for changing climate patterns. We hope these findings will help guide future habitat restoration projects.

Whirling disease has had significant impacts on many trout populations but trout in the Au Sable River appear to have avoided a substantial outbreak. One possible reason may be the lack of the appropriate intermediate host.  We have been conducting a genetic study of the intermediate host (an oligochaete worm) to evaluate this possibility.  Although we have found that oligochaetes are common in parts of the Au Sable River system, our preliminary genetic results suggest that the appropriate host may not be common. We plan to expand this study to the entire Au Sable River system this summer.

The Muskegon River below Croton Dam is one of the most heavily fished rivers in the state with steelhead being one of the most popular fisheries. However, the Michigan DNR annually stocks nearly 55.000 steelhead smolts to maintain the fishery because recruitment from fry to adult is limited.  This failure is due to the unique life history of steelhead compared to the other Pacific salmonids.  In general, steelhead spawn in the spring and the eggs hatch from May to June.  After hatching, steelhead fry remain in the river for one year and migrate to Lake Michigan the following spring.  Consequently, steelhead fry are exposed to warm summer conditions which appear to limit natural steelhead reproduction in the Muskegon River.  During the past three years, we have estimated steelhead fry survival rates, examined seasonal diets, and estimated bioenergetics parameters.  In addition, we have been quantifying the aquatic invertebrate communities. Our study has replicated a similar study conducted in the late 1990’s which allows us to make direct comparisons between the previous and current study.  From these data, we hope to better understand the environmental factors that influence survival of steelhead fry in the Muskegon.

Very little is known about the fungi that are found at the bottom of freshwater habitats.  To better understand the freshwater fungal community, I recently began collaborating with researchers at three institutions on a study to explore the diversity of fungi found at the bottom of the Great Lakes. Perhaps more importantly, the research team has been screening the fungi for chemicals that may destroy a range of cancer cells types, or alternatively, stimulate nerve cell growth.  The result so far have been extremely encouraging, with extracts from several fungal isolates exhibiting extremely high anticancer activity.  In addition, extracts from other fungi appear to stimulate nerve cell growth, and actually promote nerve cell differentiation.

Page last modified May 1, 2020
Report a problem with this page