Permanent link for Doing Business in Australia: Culture, Mentality, and Etiquette on January 5, 2023

The Commonwealth of Australia, the world’s smallest continent and largest island, is a diverse country with vast iconic natural wonders like the Great Barrier Reef and the Outback, and heavily concentrated cities such as Sydney and Melbourne. Being a newly established country in 1901, it was easy for the country to develop its own cultural personality. Although the culture can be described as Western with indigenous influences, foreigners may be surprised by the quirks and personal touches that Australians have made over time to the standards of their Western lifestyle.

A significant contributor to Western culture is the multinational and famed sport of rugby. Although Australia is well-known for being very much involved in competing internationally in rugby, they are famous for playing their own version as well, Australian football. Australian football can be described as a mixture of rugby, soccer, and American football, with an oval-shaped field and goalposts that resemble those of American football. To score points, players kick the ball through the set of goalposts that are on either end of the field. One of the most intriguing differences in this sport is that the players can pass to their teammates by kicking the ball or punching it with their palms, but they cannot throw it. Additionally, although Australian football is a contact sport, they do not wear any padding, only a jersey uniform.  Australian football is a very entertaining and popular sport to watch. For this reason, it is a notable contributor to the country’s economy. The Australian Football League (AFL) reported revenue of AUD$480 million in 2015.

Economically, Australia is revered as the wealthiest (per adult) country in the world, with a decently low poverty rate of 13.2% as of 2018. The United States plays a particularly important role in the economy of Australia, being that it remains their largest two-way trading partner in goods and services. This is a result of the Australian-United States Free Trade Agreement (AUSFTA) that was established in 2005. The passing of this agreement has since increased the trade flow by 91%.

As a result of AUSFTA, there is no surprise that American businesses seek to further strengthen the trade relationship between the two countries. Business opportunities in Australia are of wide variety and significance. However, the quirky culture can often be intimidating for business persons from other countries. There are three key aspects to understand that will enhance a business trip to Australia by providing a deeper appreciation of the country: the business culture, mentality, and etiquette.

Meetings in Australia can seem different from those typically held in the United States. To start, they are considerably more laid back. It is typical for Australian business persons to use colorful language (curse words) in meetings, as well as, crack jokes to lighten the mood. Additionally, it is common to be addressed by only your first name, and it is expected that you do the same. Even though it may not seem like it, Australians do take these business affairs seriously. Therefore, it is important to dress the part and be prepared for your meeting. If you are presenting a proposition or sitting as a chairman, it is expected that you be punctual and show up to the meeting a few minutes early. Also, be sure to chat about things like the weather or sports to relax the atmosphere.

A key factor in the business culture of Australia is modesty. Australians are very modest about their job position; it is very unattractive to them when a foreigner emphasizes their title and the greatness of their business. For this reason, it is recommended to not use an aggressive sales technique to persuade a potential partner, as most of the time it will not work. Avoid overselling your company, or coming off as self-important. It is more persuasive if the facts are laid out for them with a friendly attitude. But even if you do execute your sale in this way, they still may clearly express that they are not interested; Australian business persons are known to be very blunt and honest when considering a business contract. It is important to prepare for a straightforward rejection. Of course, this response will not be rude, but rather, more diplomatic. Nevertheless, it may take longer than expected to receive this response. This is because businesses in Australia value a team environment. The top management of a corporation will most likely consult their subordinates before deciding. No matter your position in the company, Australian businesses are very considerate of everyone’s opinion and expect that it be shared. Patience and understanding are key in these situations.

Gifts are not expected at business interactions but are greatly appreciated when given at the correct time. In Australia, it is commonly understood as bribing when a person brings a gift to a meeting before the close of a deal. If you decide to give a gift, simply have one prepared if a close or agreement arises. This will come off as congratulations and will be admired. Additionally, if invited out to dinner or drinks, do not begin to discuss business unless the counterpart does so. It can be seen as rude, or pushy if a business person attempts to bring a pitch to the table because it can cause stress and create a serious atmosphere.

If you are planning a trip to Australia for business purposes, it is recommended to understand the unique business culture, mentality, and etiquette of the country. A comprehensive education of these elements of their lifestyle will allow more of a relationship and connection to develop between two business persons of different backgrounds. And, if you have some free time in Australia, attempt to catch an Australian football game - you will not be disappointed.

Learn more about the country, trade, and culture of Australia by registering for the Business Travelers Series: Navigating Australia on February 15, 2023 from 9am - 10am EST. This virtual event is generously sponsored by The  Gerald R. Ford International Airport  and  Michigan Economic Development Corporation

Interested in Traveling to Australia?
Contact the Michigan Economic Development Corporation today to learn about the Michigan and Pennsylvania co-hosted trade mission to Sydney and Melbourne, Australia with an option to visit New Zealand.

Did you know that qualifying Michigan companies have the opportunity to receive STEP funds for International Trade Missions and Trade Shows like this one?

To find out if your company is eligible new companies must complete and submit an online intake form here. Existing clients can contact your regional international trade manager. Funds will be approved for specific and measurable export initiatives. Funds for the MI-STEP program are subject to availability. Learn more about the MI-STEP program here. 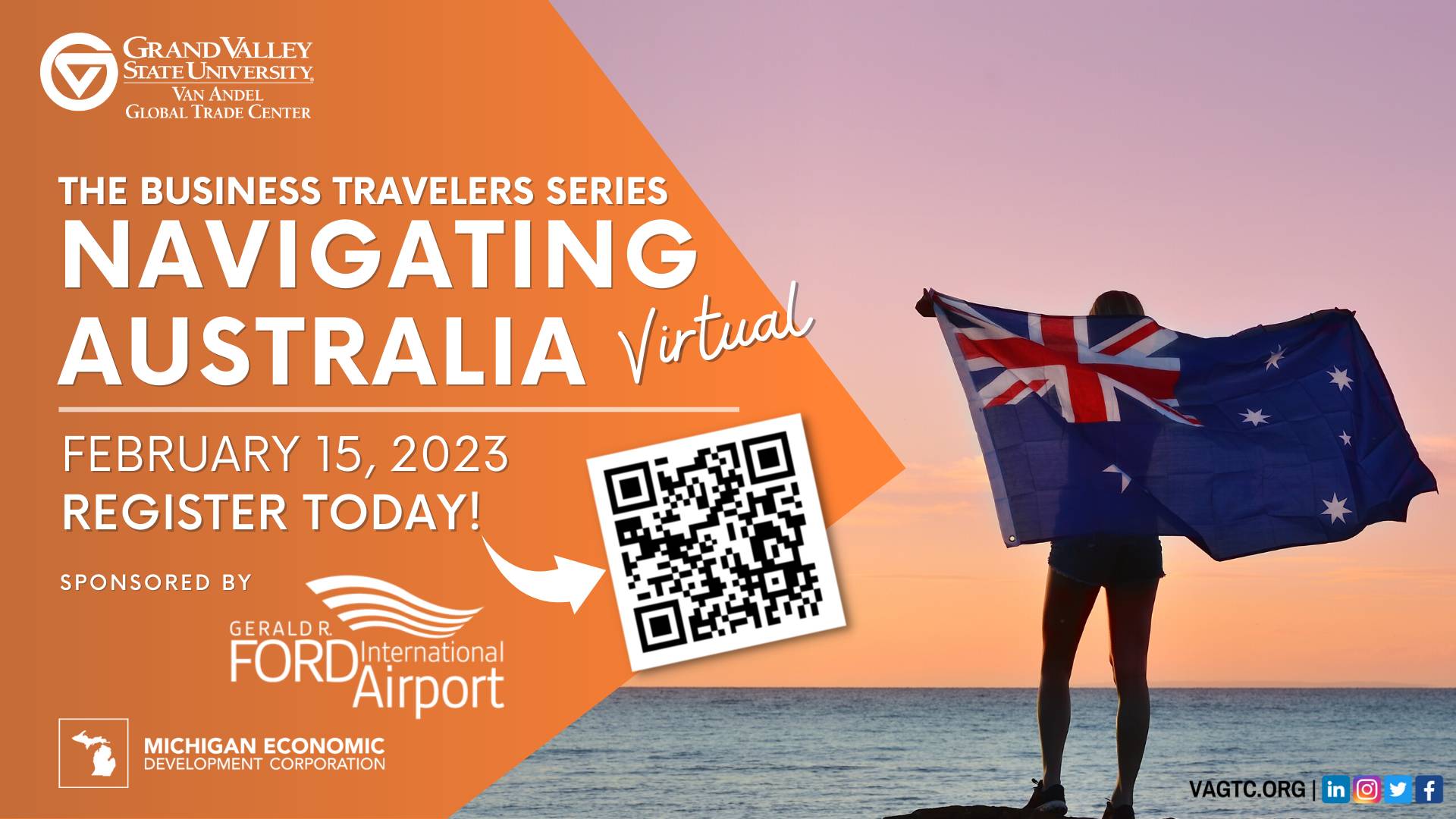 Page last modified January 5, 2023
Report a problem with this page