Permanent link for Holiday Celebrations Around the World on December 19, 2022

The holiday season is here again! GVSU’s Van Andel Global Trade Center would like to celebrate with you by sharing some of the holidays and festivals you can find around the world this month.

Every year, millions of people celebrate the birth of Jesus on December 25th. The celebration of Christmas began in the Roman Empire, though methods of celebration vary greatly around the world. In the West, for example, Christmas trees are popular; the tradition started in Strasbourg, Germany (now part of France) where fir trees were decorated with apples. In Eritrea, neighborhoods will purchase cows and have a community feast together. It is popular for Japanese families to enjoy their Christmas meal at Kentucky Fried Chicken, following an ad campaign in the 1970s. The Icelandic Yuletide Lads, mischievous little elves who climb down the mountains into towns, play tricks and leave children presents; while, it is a popular tradition to roller-skate to church for the weeks leading up to the 25th in Venezuela. There are many more weird and wonderful international traditions like these.

Celebrated every year on either December 5th or 6th, St. Nicholas day celebrates…St. Nick! St. Nicholas was the bishop of the city of Myra during the 4th century who was renowned for his generosity. Popular during the Middle Ages, St. Nicholas fell somewhat into obscurity after the Protestant Reformation. The Dutch, however, continued to celebrate “Sinterklaas”, as they refer to St. Nick. Every year on his feast day, Sinterklaas would give candy to all the good children of the Netherlands, and provide the bad ones with coal, as well as potatoes and sticks.

From the Netherlands, Sinterklaas was celebrated in the Dutch colony of New Amsterdam, where the tradition remained after the British acquired the port city and renamed it New York. There, “Sinterklaas” became “Santa Claus” and was merged into Christmas celebrations. Back in Europe, St. Nicholas Day remains popular in Belgium, Luxembourg, and the Netherlands, as well as parts of Germany France, and Italy. Typically, on the night before St. Nicholas Day, children place a shoe or a boot in front of the fireplace. In the morning, they wake up and discover that St. Nicholas has left them a shoe full of candy and cookies (or potatoes). In Bari, Italy, where St. Nicholas is buried, the day is accompanied by gift-giving and a parade.

On Christmas Eve, families of Polish descent will hold Wigilia, a large feast celebrating the birth of Jesus. Typically, families will spend the days prior to preparing for the feast, comprised of either seven, nine, or eleven courses. Before sitting down, everyone breaks a piece of bread from a traditional wafer and wishes for health, wealth, and happiness. It’s a tradition that an odd number of people cannot be sitting at the table at any point during the meal, and that an extra place at the table is set for Jesus. Meals are meatless except for fish, and traditional Polish dishes such as pierogi and babka are served.

Every December 26th, Boxing Day comes around. Although, if the 26th falls on a weekend, the following Monday will be the day of celebration. Boxing Day is popular in the United Kingdom, as well as in Commonwealth nations such as Canada, Australia, and New Zealand. Originally, Boxing Day was the day that the wealthy and the royals would give gifts to their servants and tradespeople, as well as a general day of charity to the poor. Today, Boxing Day is marked by bonuses given to employees and sporting events such as horse races and rugby matches. It is also common to enjoy a second dinner of leftovers made from the big Christmas meal.

For eight days starting on the 25th day of the Jewish month of Kislev (which began on December 2nd in 2018), Jewish communities celebrate Hanukkah. This is the celebration of the rededication of a Jewish temple in 165 BCE after it was desecrated by an invading army. The most well-known Hanukkah tradition is the lighting of the Menorah, which represents the story of “the Oil in the Temple”. As the story goes, on the first night after the desecration of the temple, there was only enough oil left to light the sacred menorah for a single day. This small amount of oil, however, lasted for eight days, the perfect amount of time for more consecrated oil to be brought to the temple and keep the Menorah lit.

In Israel, Hanukkah is celebrated with parties and songs, as well as a few particularly unique traditions. Every Hanukkah, the relay from Modi’in takes place, in which runners carrying torches run from Modi’in to the Western Wall, the only part of the original temple that still stands. Many different foods are eaten during Hanukkah such as Latkes and sufganiyot. Children are also given gifts and chocolate coins and spin the dreidel.

Searching for ways to bring the African American community together after the Walt Riots in Los Angeles in 1966, Dr. Maulana Karenga created Kwanzaa. Kwanzaa is a celebration of African heritage and culture, primarily recognized in the United States, but does have observers around the world. Celebrated from December 26th until January 1st, Kwanzaa focuses on African tradition and values known as the seven principals. These are unity, self-determination, collective responsibility, cooperative economics, purpose, creativity, and faith. The kinara is a traditional candleholder with seven candles, colored red, green, and black, which represent the seven principals. The candles are lit, and the family joins in a discussion over the theme for that day. On December 31st, families hold a feast called a karamu, and often wear traditional African clothing.

St. Lucia Day is a Scandinavian holiday celebrated in Norway and Sweden, as well as in Norwegian and Swedish speaking communities abroad. Honoring St. Lucia, a Christian martyr, the day is intended to usher in light in a time of the year where, depending on how far north you are, the sun may never rise. During the celebration, a family will dress one of their daughters in white, and she will serve coffee and baked goods to her family and guests.

The Jonkonnu Festival is a Caribbean festival celebrated on December 26th. Jonkonnu is a specific kind of dance created to blend traditional African and English dance that originated among slaves in the Bahamas, Belize, Bermuda, Guyana, Jamaica, and St. Kitts & Nevis. Dancers and musicians wearing homemade costumes with traditional African and English imagery parade to public areas and hold community dances. Today, it’s also more common for communities to hold dance and costume competitions on that day.

No matter how you celebrate, GVSU’s Van Andel Global Trade Center hopes that your holiday season is filled with cheer!

Benjamin David was an undergraduate student at Grand Valley State University and a Student Assistant at Van Andel Global Trade Center. He was an International Relations and Economics major and a German minor. He plans to go to law school after graduation and hopes he may eventually work at the U.S. State Department. Ben loves discussing cars, airplanes, and languages. 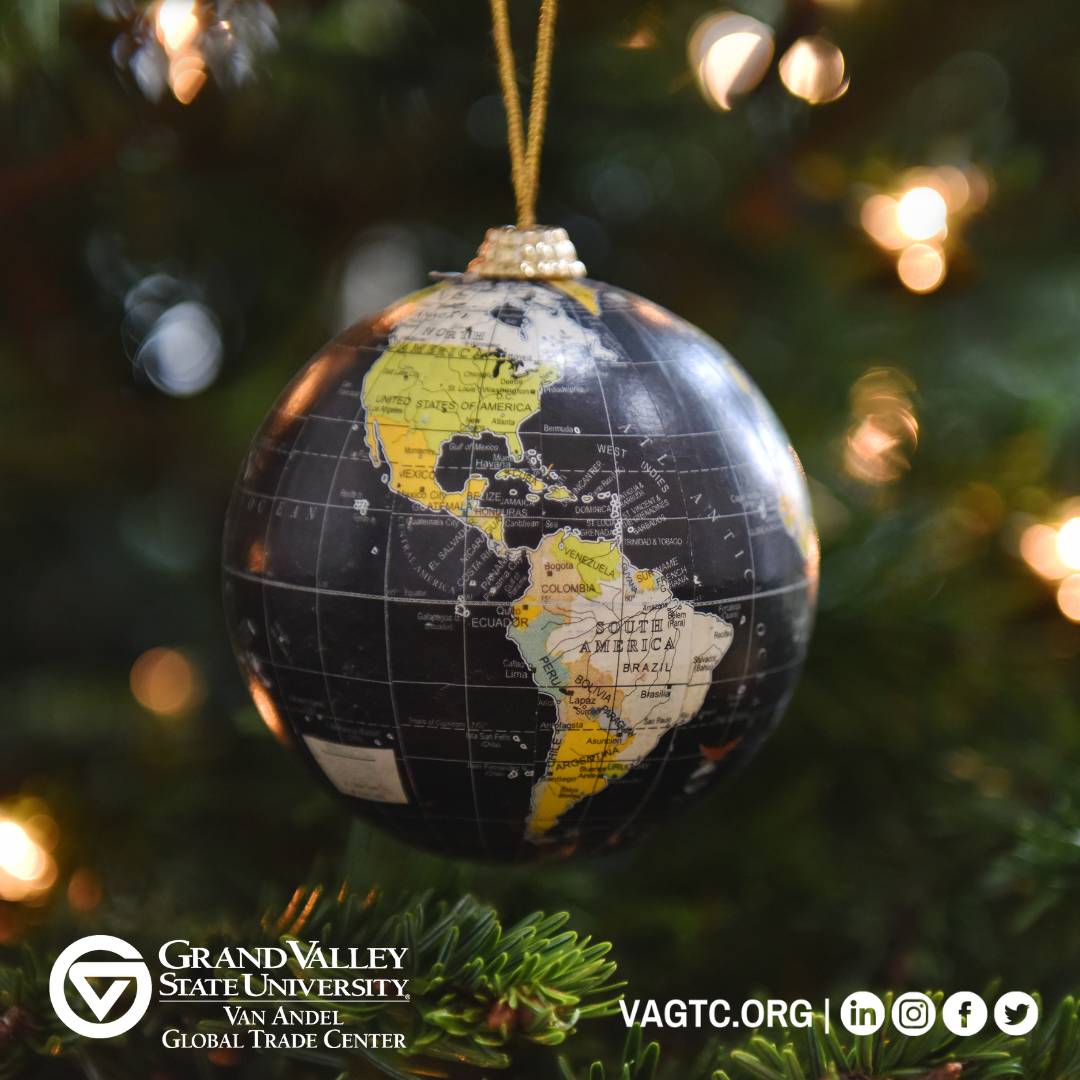 Categories: Culture
Posted on Permanent link for Holiday Celebrations Around the World on December 19, 2022.

Page last modified December 19, 2022
Report a problem with this page