Bridge Over the River Kwai 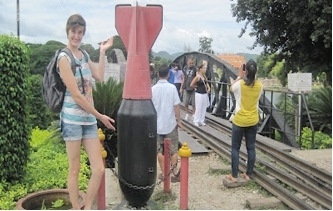 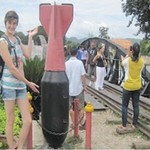 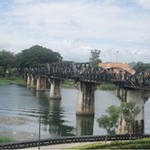 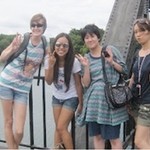 Bridge Over the River Kwai

Murray Scholarship recipient, Megan Dekievit, gets a history lesson of a historic bridge during her time in Thailand.

I am Grand Valley student currently studying at Mahidol University in the Bangkok area of Thailand. A few weekends ago, I took a trip with a couple friends from the university to the nearby province of Kanchanaburi. There are many interesting things to see in Kanchanaburi, including the Bridge Over the River Kwai, which was made famous by the 1957 British war film of the same name.

I took this photo of the bridge. Some of you wonder how this bridge exists, because it’s destroyed in the movie. Actually the movie is mostly fictional and was filmed in what is now Sri Lanka. The river itself had been named Mae Klong, which was changed after the release of the movie in order to promote tourism. "Kwai," the way Westerners pronounce it, means buffalo in Thai; "Kwae," as the name was changed to, means death. I believe this mix-up is humorous to Thai people.

The bridge was built during World War II by Dutch and American prisoners of war who were captured by the Japanese. The project was part of Japan’s efforts to invade Burma via Thailand, and it cost the lives of 90,000 Asian workers and 16,000 allied POWs.

Even though it has such a sobering history, the site is still crawling with tourists. I must confess to being one of them.

Even as I joined in, it struck me as strange that a place like this, which houses memories of a instance of human history containing horrible acts of violence, has become one of the most photographed sites in Thailand. I wondered how many people knew the gravity of what this place represented. It's a serviceable bridge. And while it has an intense history, today people ride trains across it on their way to Burma. It seems so normal now.

I took this trip with some new friends from Japan. Leaving the site, I thought about how uneasy it might make some of my older relatives who lived through that war feel, knowing that I had visited this place. It was weird to think that even as we took photos of the bridge, there was a possibility that someone who helped build it is still living today.

We are told to keep history in mind so that we learn not to repeat it. So, I will take that moment, remember it, and continue to be pleased about making Japanese friends. It's both strange and amazing that our cultures can move past the past. Only a couple generations after a horrible event in human history, we can be standing together at the monument of that event, smiling for the camera.