The Pigeon Creek Shakespeare Company returns to the Grand Valley Shakespeare Festival Conference in 2018 with its production of Shakespeare's Henry VI.  This new adaptation of Shakespeare's three parts of Henry VI includes originally composed music and songs to tell the story of the Wars of the Roses between the houses of Lancaster and York.  Director David Little will give a pre-show talk about the adaptation process, and the show will be followed by a talkback with the actors. 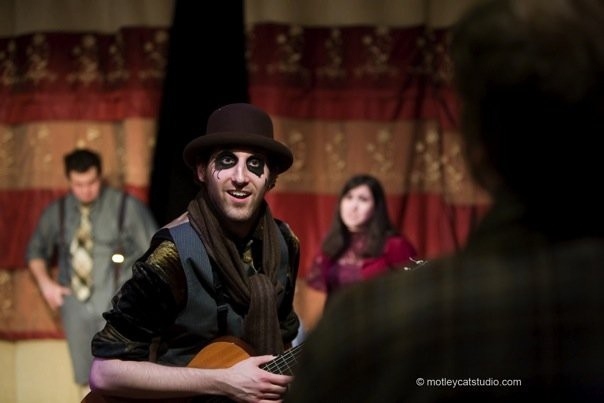 Founded in 1998, the Grand Haven based Pigeon Creek Shakespeare Company is Michigan's only year-round, touring, professional Shakespeare company.
The company was started by Chicago area actor and director Frank Farrell, who appeared several times as guest artist with the Grand Valley Shakespeare Festival, and a group of West Michigan actors, including current executive director Katherine Mayberry.  From 1998-2007, Pigeon Creek produced plays outdoors in the Ottawa County Parks during the summer months.  In 2008, the company expanded to performing throughout the year, and currently produces 4 mainstage plays per season, as well as numerous staged readings, performances of Shakespearean scenes, and educational programs.  Pigeon Creek's current board includes several GVSU alumni, and maintains strong ties with the Grand Valley Shakespeare Festival.

Each of the company's productions tours to at least 4 venues within the state of Michigan, and Pigeon Creek has also been invited to tour to venues in Virginia, Ohio, Iowa, and New York.  The company has a performance style based on the staging practices of Shakespeare's own lifetime, and influenced by the current Original Practices movement in the performance of Shakespeare's plays. Pigeon Creek's audience members experience a lively, interactive theatre experience, with live musical interludes, cross-gendered casting, and characters speaking directly to the audience.

"While it takes a lot to impress me, I was utterly thunderstruck by the sheer brilliance and talent in this company! I have seen a lot of Shakespeare but have never been swept up and carried off with it like that because it was alive! If you are into big show-off productions with lots of loud music, garish stage settings, and distracting costumery and props, this isn't for you, and frankly, their acting doesn't need to hide behind superfluous bells and whistles that appeal to the uninitiated. If you prefer to savor Shakespeare on the strength of pure acting talent, a deep understanding of the literature, an incredible finesse with the language (their cadence, emphasis, enunciation of Shakespearian English made it sound 'natural') and impeccable timing and synergy between the actors, then GO to the very next performance by this company at this theater."

"There is a playfulness about Pigeon Creek's production that makes it accessible. All of the performers are skilled at engaging the audience and bringing them into the action of the play, either through the simple act of eye contact, or by actually sitting next to them and talking to them throughout the show. There is a familiarity and ease with the language that all of the players have, and they make the eliciting of smiles from the audience seem effortless throughout the entire show."

For more information about the company and all of its programming, please visit the website at www.pcshakespeare.com.


Page last modified March 12, 2018
Report a problem with this page