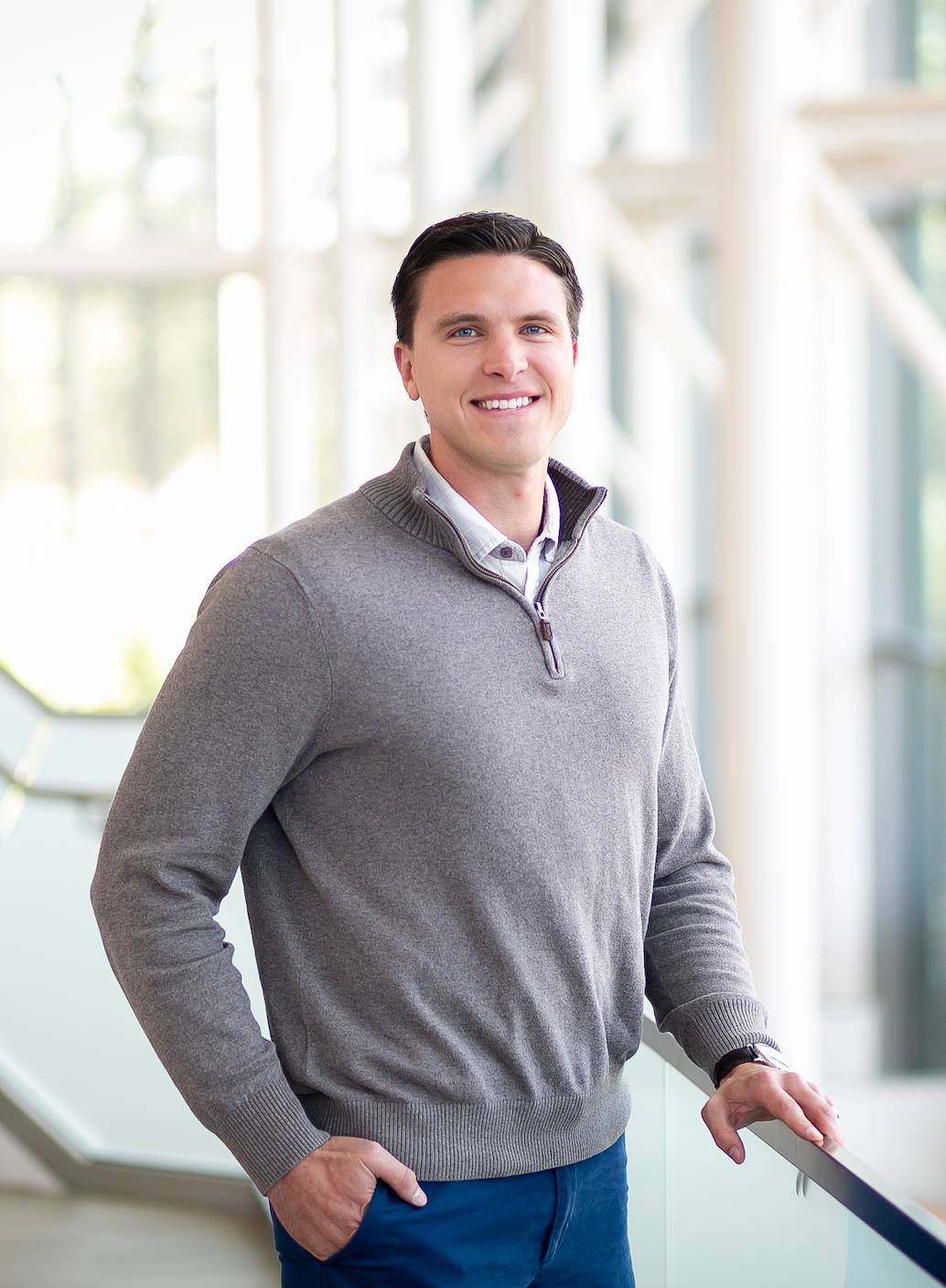 Mike joined the Recreation team in May 2019 after his most recent work at Ferris State University as Coordinator of Athletic Event Operations & Special Projects. He earned a bachelor’s degree in Physical Education (emphasis on Sports Leadership) with a minor in Business from Grand Valley State University in 2012, while also competing on the Men’s Basketball team. Mike completed his graduate work in 2014 from the University of Arkansas with a M.Ed. in Sports & Recreation Management, before spending four years in Flagstaff, Arizona as Assistant Director of Campus Recreation at Northern Arizona University. Outside of work, Mike enjoys spending time with family and staying active in a variety of ways. 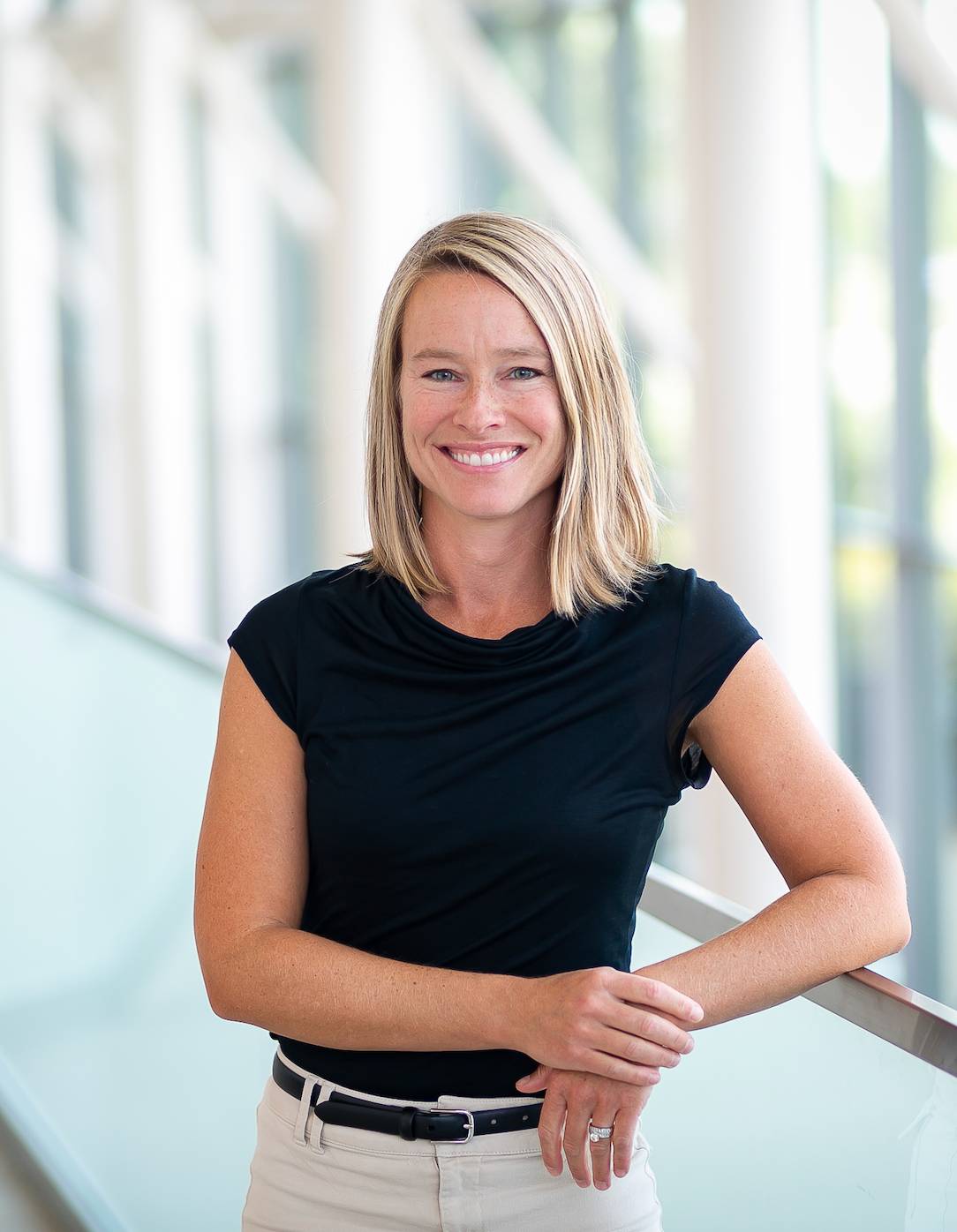 Amy has worked as a professional with Recreation since 2003. She earned her B.S. degree from Hillsdale college in Health and Physical Education, and her M.Ed. from GVSU in College Student Affairs Leadership. Her responsibilities are to oversee all operations of Fitness and Wellness programs and services, including the Group Exercise program. She is also the co-director for the Injury Care Clinic. Amy also serves on a number of campus committees, to support efforts in improving the health and well being in and around the GV community. Amy is certified through NSCA-CPT, SPINNING®, TRX credentialing, Yogafit I, and an Instructor for CPR and First Aid through the American Red Cross. 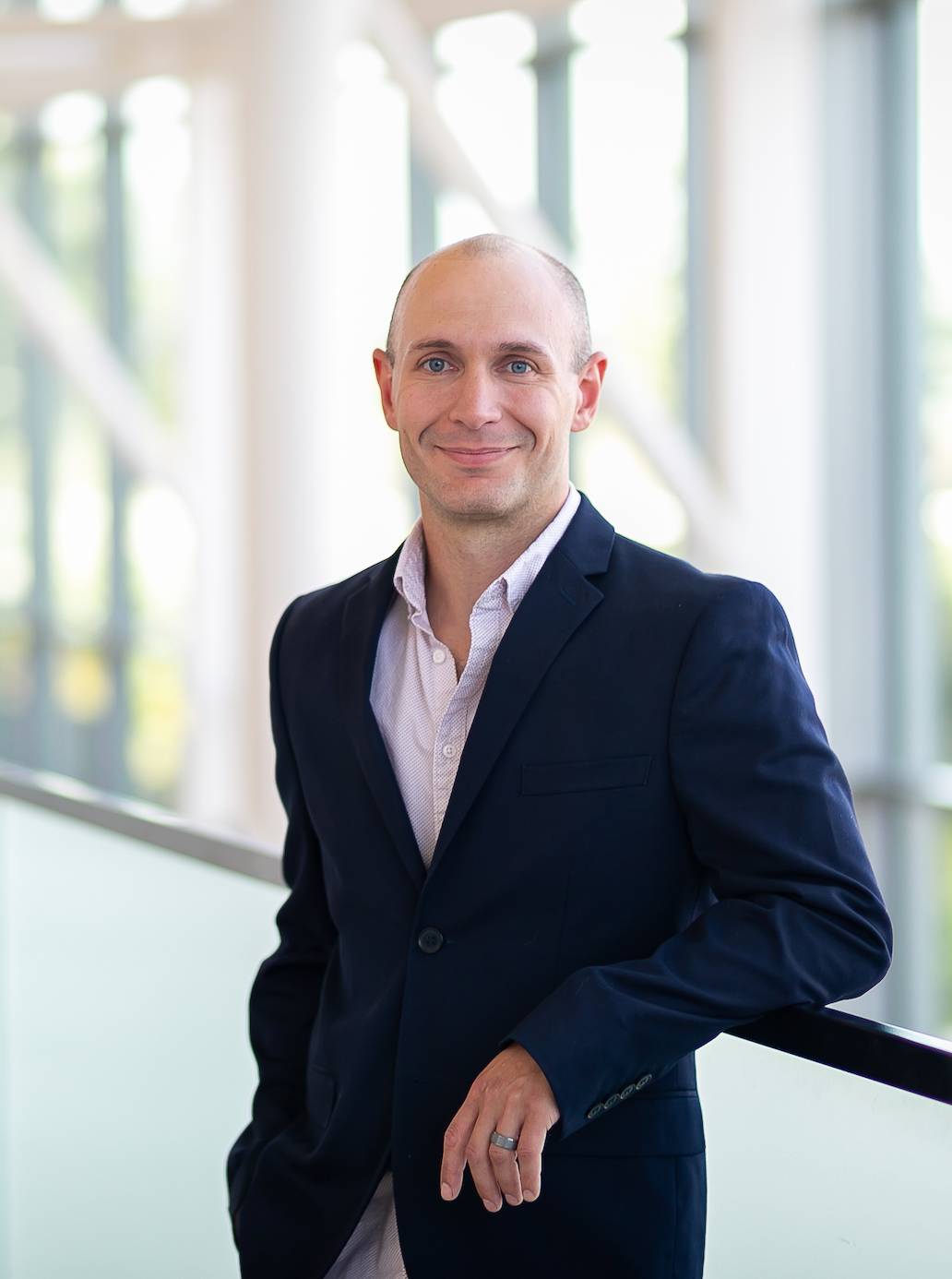 Joe was named the Assistant Director of Recreation overseeing Outdoor Adventures and the Climbing Center in 2016 after previously serving as the GVSU Climbing and OAC Manager since 2007.  Joe received his bachelor's degree from Western Michigan University, where he majored in Recreation Management.  Joe's efforts empower and inspire the GVSU community through outdoor and adventure based opportunities.  Joe is avid rock climber and climbing instructor. 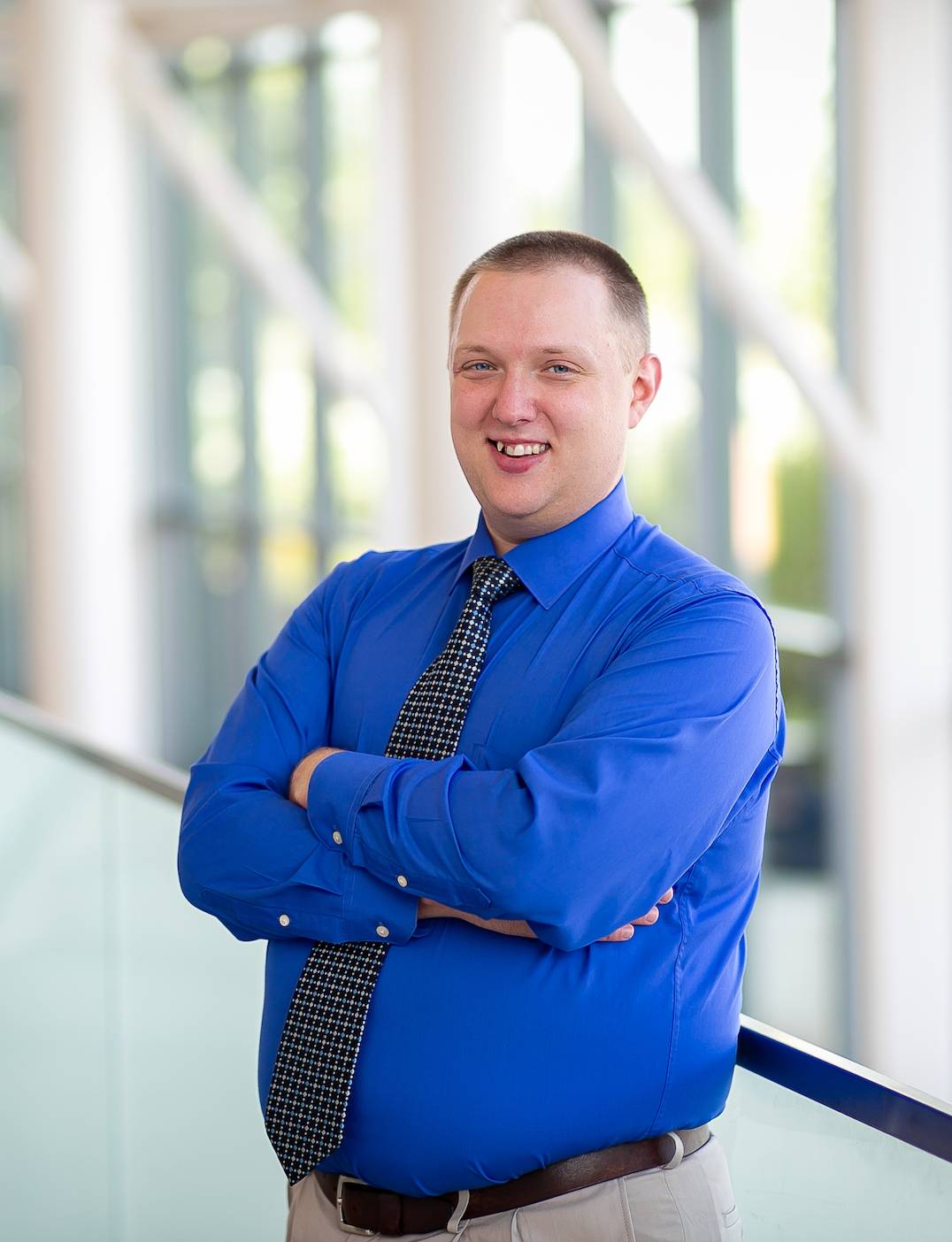 Born and raised in rural Northern California, Mitch began officiating when he was 14 years old as a little league and softball umpire. As his senior project in high school, Mitch officiated high school football. The first game he worked, he was on the sideline of his high school. Mitch roots for Bay Area sports teams, which means since 2010, he has rooted for champions. 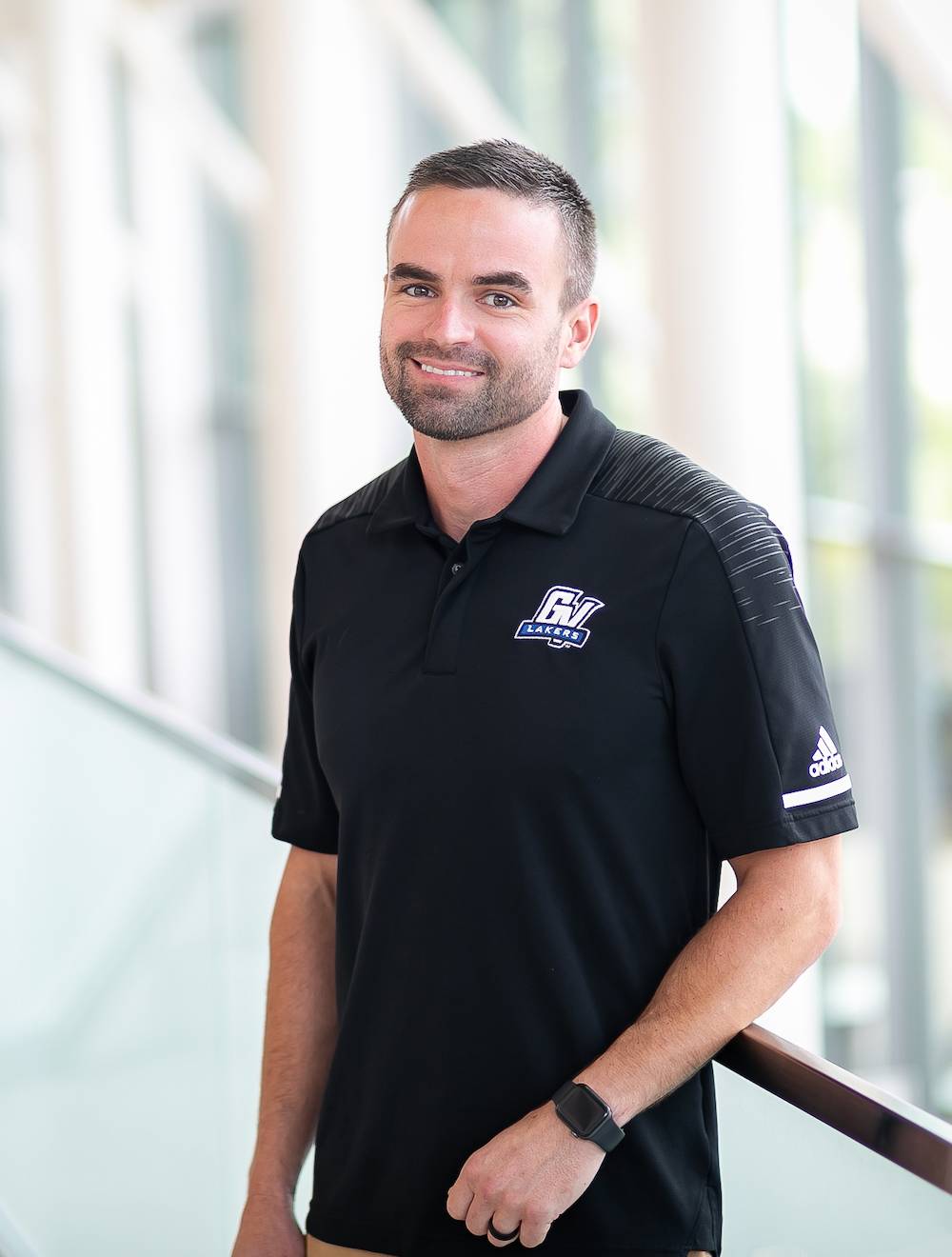 John joined the Recreation team in May 2019, after previously serving as the Facility Operations Coordinator in the GVSU Athletic and Recreation Facilities Department. He earned his bachelor’s degree in Physical Education and Health from Eastern Illinois University, a Master of Arts from Gonzaga University in Sport and Athletic Administration, and a Masters of Business Administration from Pepperdine University.  John’s professional experience prior to GVSU includes serving as the Assistant Fitness Facility Director for Semper Fit on Camp Pendleton, California, as well as eight years in the United States Marine Corps.  During his spare time, John enjoys spending time with his family, staying active, traveling, and being outdoors. 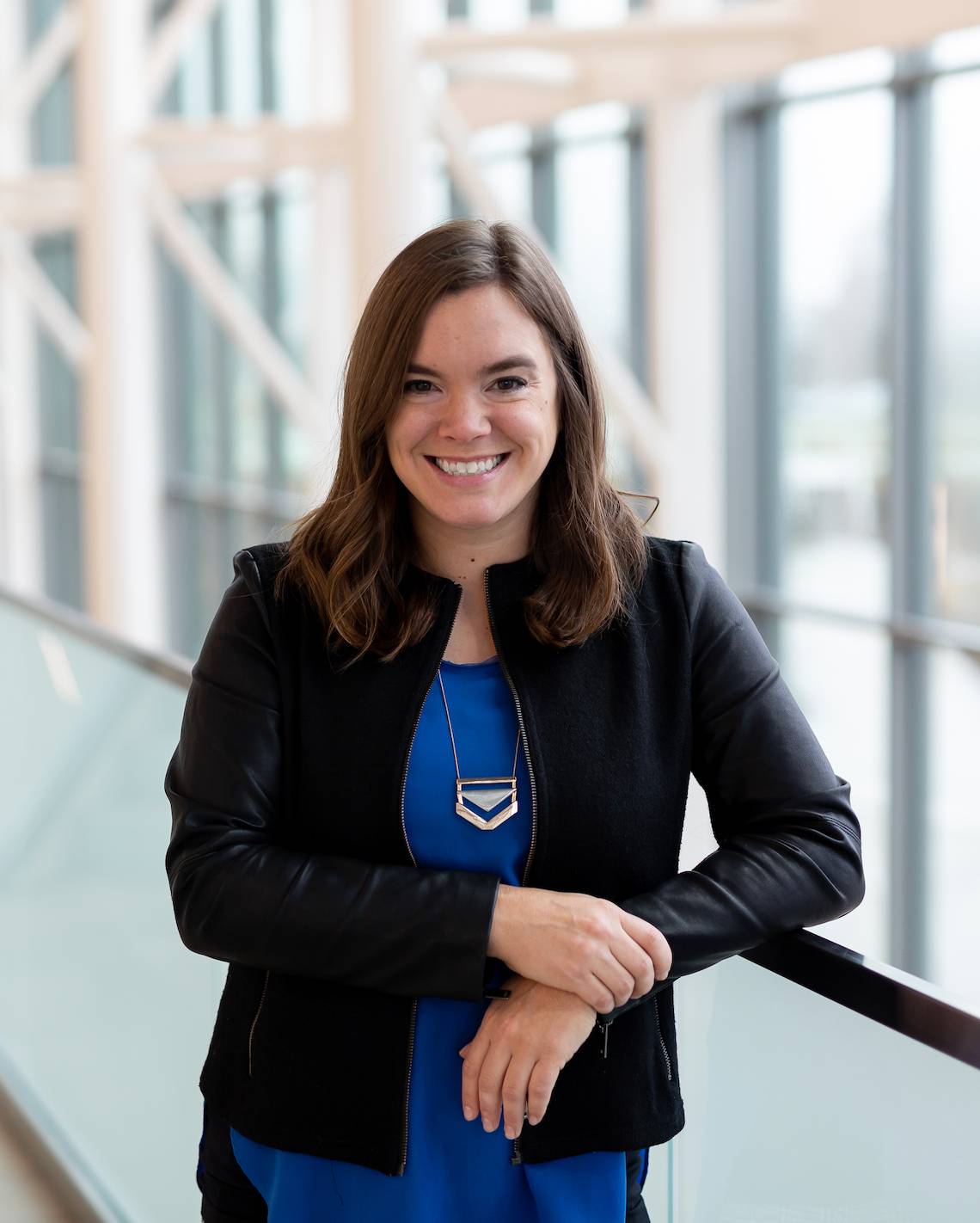 Katie joined Recreation and Wellness in November 2019. Katie hopes that her experience in community health will help guide her in supporting and improving the wellness of all GVSU students. Prior to GVSU, Katie’s work was in the realm of public health. She began her career as health educator and tribal fitness center coordinator for the Nottawaseppi Huron Band of Potawatomi Indians supporting nutrition and exercise programming for tribal members. After that, Katie spent seven years as a public health educator with District Health Department #10 working primarily in sexual health and substance abuse prevention among youth and young adults. Katie received her bachelor’s degree from Central Michigan University majoring in Public Health Education and Health Promotion, Spanish, and minoring in Nutrition. She went on to get her Master of Public Health in Health Behavior & Health Education from the University of Michigan. 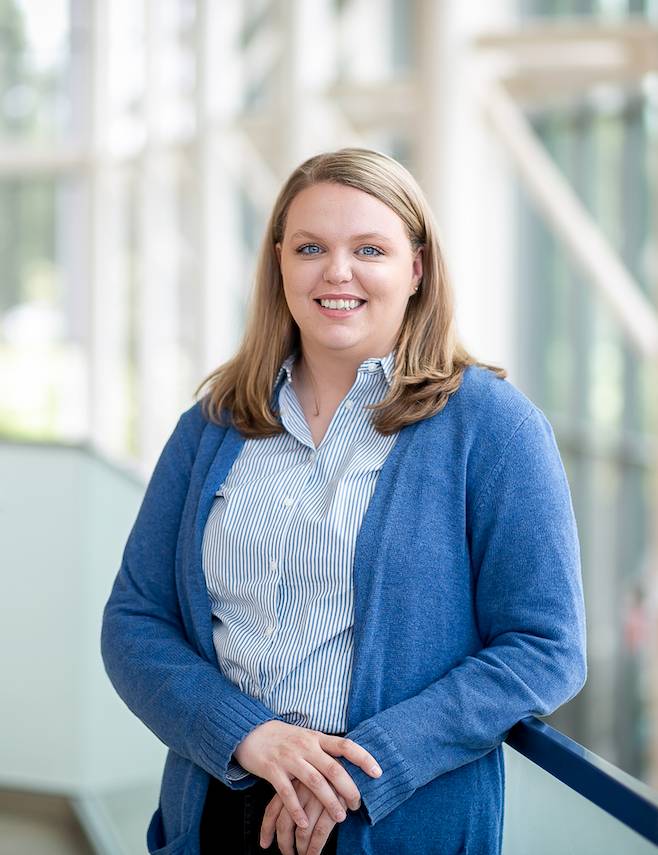 Brianna graduated from Ferris State University in 2016 with a B.S. in Marketing and an A.A.S. in Graphic Design. In her time at Ferris State, Brianna was a student leader on campus and worked within the Recreation Department in multiple positions. She has a background in photography, horseback riding, public speaking, and coaching. Brianna spends her time away from campus with her corgi, Colby Cheese, at the horse barn or walking trails on the lakeshore. 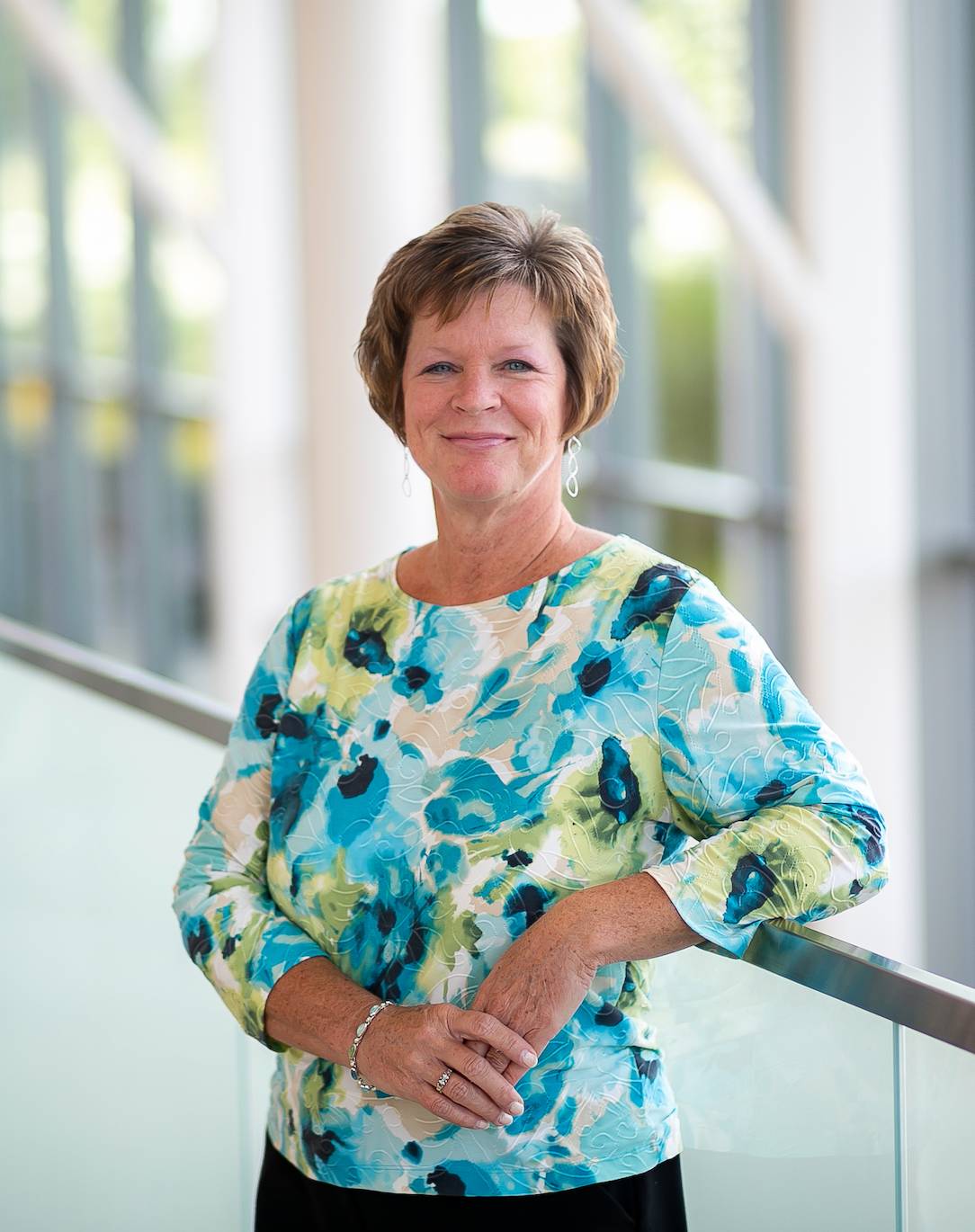 Jody started working for Recreation & Wellness in 2017, and has worked at GVSU since 2010, when she began working in the Business and Finance Division. Jody enjoys the high level of student engagement, as well as assisting staff members with their many faceted programs. She is a graduate of Davenport College. In her free time, Jody enjoys working in her perennial gardens, walking along beautiful Lake Michigan, and spending time with family. 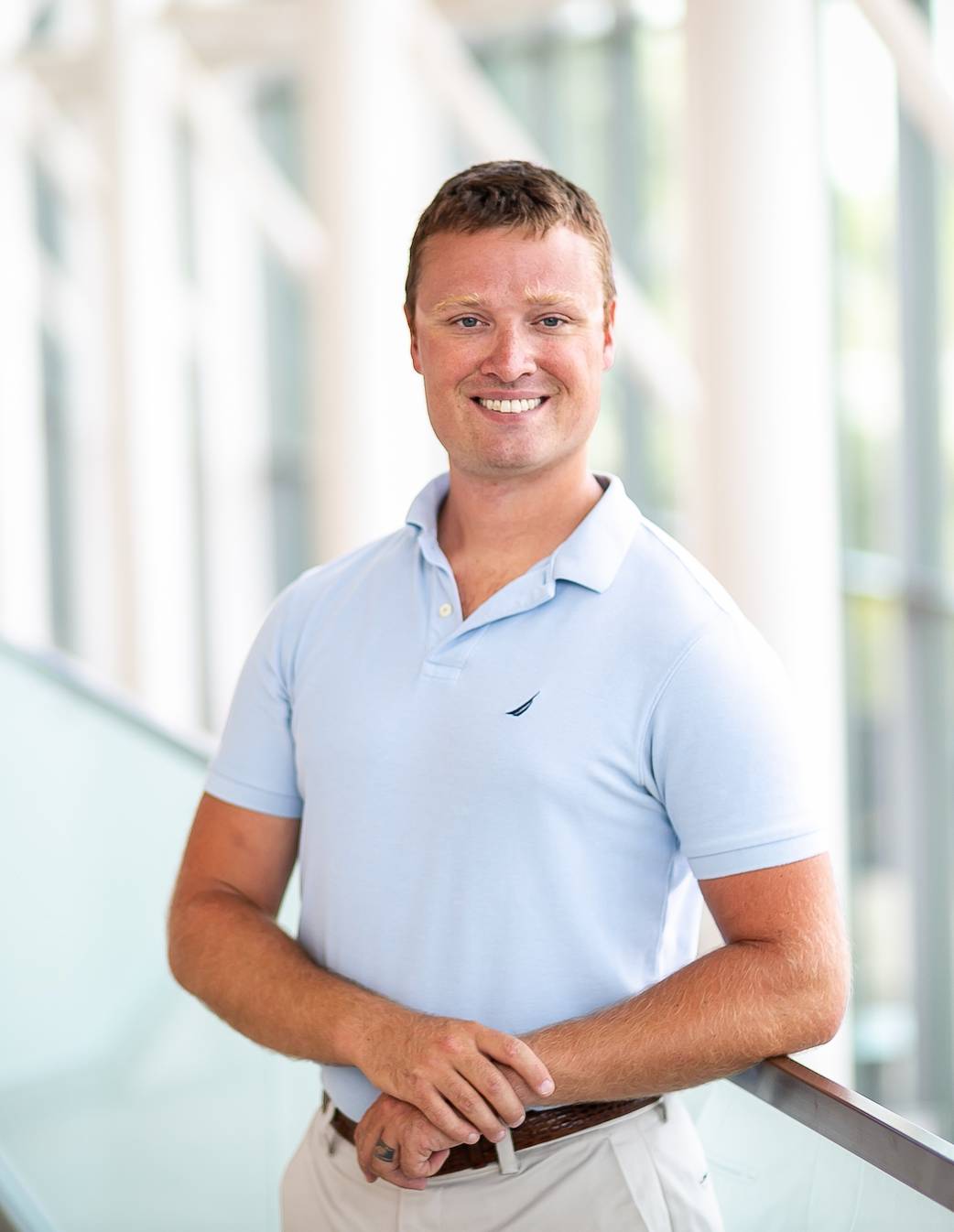 Dan started his rowing career as a junior at Lake Braddock Secondary School in Burke, Virginia. As a senior, his second varsity four went undefeated in the regular season and won a state championship, the school’s first. Bitten by the rowing bug, he walked on to the team at the University of Virginia. While in Charlottesville, he was a part of gold-medalist crews at the GW Invitational, SIRA championships, and ECAC National Invitational Rowing Championships.

After his collegiate career was up, Dan spent a fifth year at UVA to finish a master’s degree in Secondary Science Education, aiming to become a high school chemistry teacher. Upon graduation, he started coaching learn-to-row classes with Sandy Run Scullers on the Occoquan Reservoir, and racing the single in fall head races. The last six years, he’s taught and coached at Fairfax High School, working with the Varsity Women’s squad throughout. Over that time, the team almost tripled in size, and both men’s and women’s squads found unprecedented success at the state and national level; twelve of the team’s sixteen total medals at the Virginia State Championships were won in that period. The last three years, during which Dan also served as the team’s head coach, saw the team successfully transition from racing primarily 4’s to focusing on the 8+. 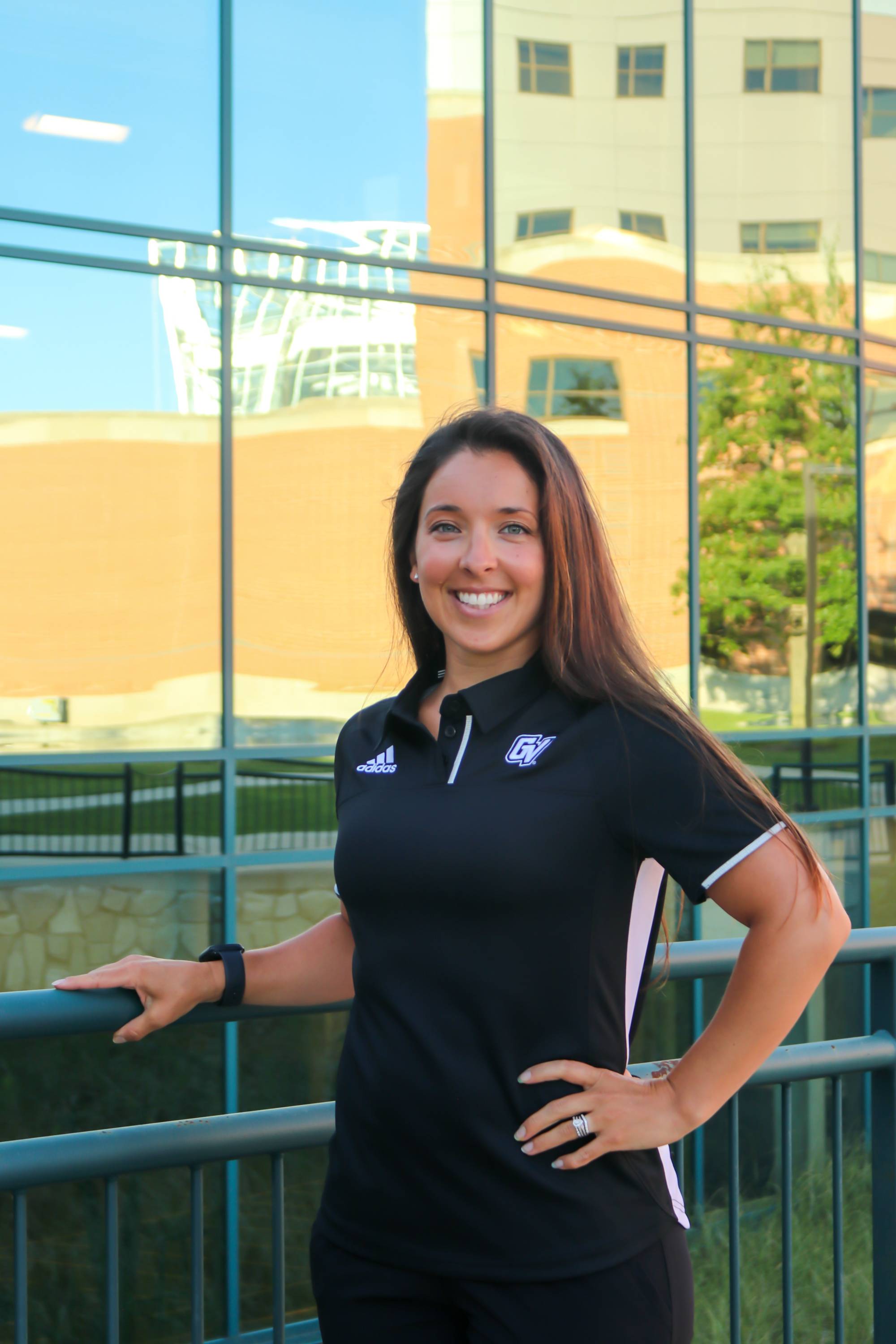 Toni has been working with Fitness and Wellness as a group exercise instructor since 2018. She joined the professional team in May 2021. Toni earned her Bachelor of Science in Psychology from GVSU. Her professional experience prior to GVSU includes working as a Group Fitness Instructor at Choice Health and Fitness in North Dakota. She was also a competitive dance coach for seven years. Toni is certified through Zumba and American Barre Technique. 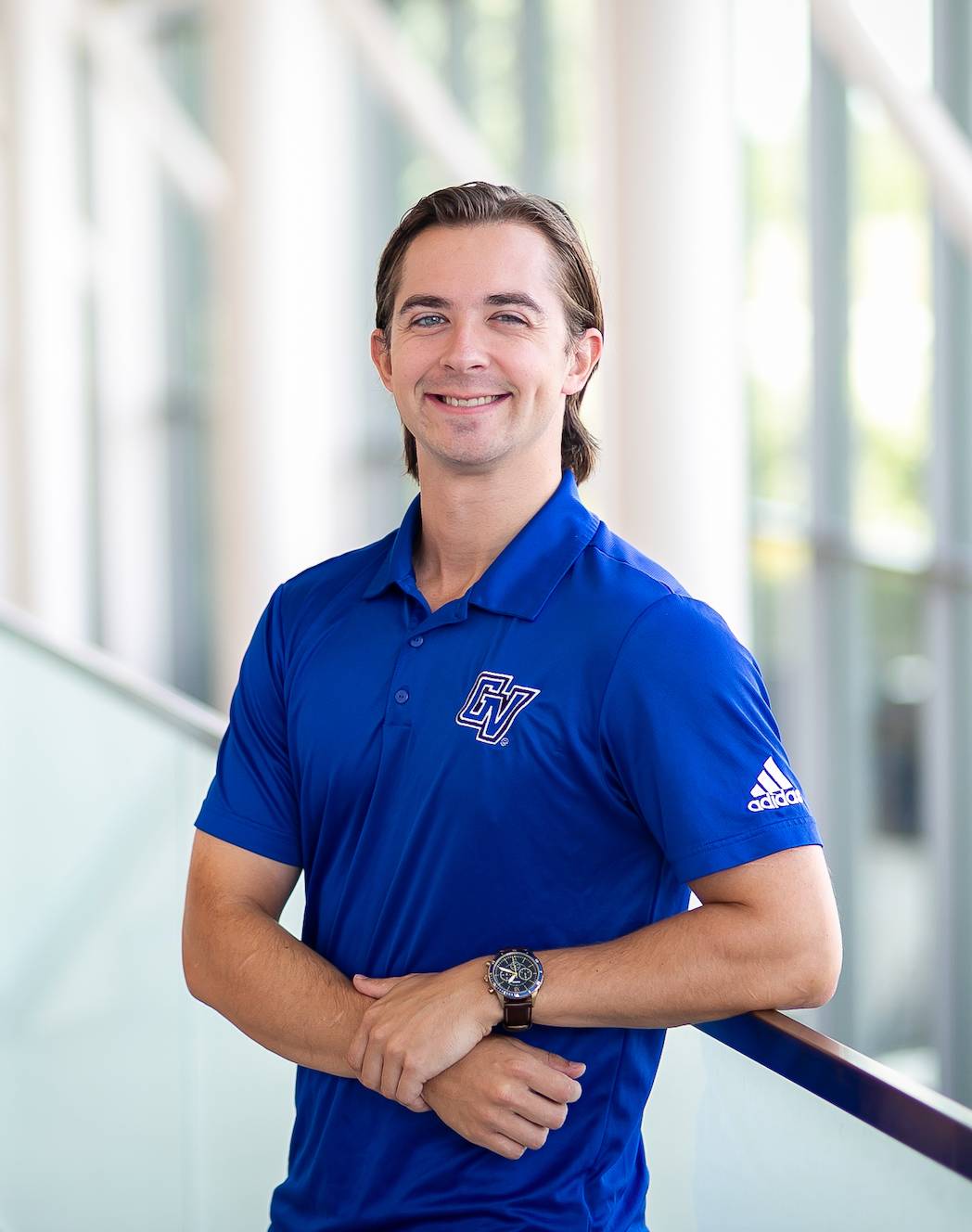 Connor has worked with Recreation during his fieldwork and internship in 2017-2018, and is now completing his Graduate Assistantship as he pursues his Masters of Science in Public Health emphasizing on Health Promotion & Education. During his undergrad, Connor majored in Exercise Science with an emphasis on Health and Fitness. Connor was an avid user of GVSU Recreation services, including, winning a national champion with the Men's Club Lacrosse team, and he is currently an assistant coach for the team following his playing years. Connor also works as a personal trainer in the Grand Rapids area, specializing in sport performance, strength training, and late stage rehabilitation. He is currently working towards becoming a certified strength and conditioning coach as well.

Our student employees keep our day-to-day operations running. They help create our inclusive and diverse community!


Page last modified June 17, 2021
Report a problem with this page