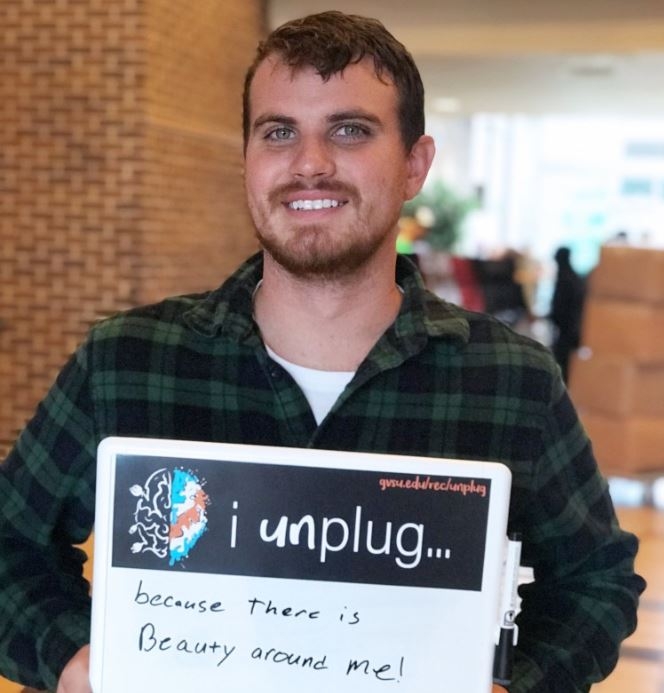 Grand Valley State University Campus Recreation team members are logging out of their social media accounts, checking their emails less and spending more time with others—and they’re encouraging others to do the same.

The department began their “Unplugged” campaign Oct. 1, a two week campaign that features a series of events and activities to help students spend less time on their phones and more time experiencing the world. Throughout the campaign, Campus Recreation will be collecting stories about how and why students are unplugging and posting them online.

Campus Recreation Assistant Director of Marketing and Special Events Kayla Cupples said that the idea behind the campaigned spurred directly from conversations with students. When brought into the marketing department, she said social media is often makes us “plugged in,” which made her want to explore the topic as a part of her perusal in a Masters of Science in Communications.

“Those conversations inspired me to spend the [last] spring and summer semesters focused on a research project about those effects on college students,” Cupples said. “While the benefits are fairly well known, some data shows that social media can actually disconnect us rather than connect us.”

Upon looking to create the campaign, the focus was on letting students know the risks surrounding using too much technology. On top of informing students, the event includes Campus Recreation events and partnerships with other department events on campus, inviting those who want to unplug to attend.

“Our initial focus was not to plan a health week, but to create awareness around the effects of spending too much time on our devices, technology or social media,” Cupples said. “‘Unplugged’ likely means something different for everyone, and that was the goal… whether it’s not using your phone while you’re with others, avoiding email during dinner or simply spending less time on social media in general.”

As part of the campaign, Cupples said she is working to unplug with her peers. She said she began by disabling notification on Facebook, Twitter, Instagram and Snapchat. Despite it being part of her work to create content for social media, Cupples said that the campaign is helping her become more mindful of her use of social media.

“The first couple of days, I found myself logging into the apps as a habit,” Cupples said. “It’s definitely more difficult than I thought it would be, but it’s also refreshing and rejuvenating knowing I’m hopefully breaking that habit. Being more mindful of it has definitely increased my productivity and mental well-being.”

Through actively participating in the campaign, Cupples said she is already seeing a very welcomed change in the people who have unplugged around her.

“It’s great to be surrounded by others who are also unplugged or at least being mindful of it,” Cupples said. “There’s nothing like being with people who are listening to you instead of having their head down in their phone.”

With the campaign still officially underway until Saturday, Cupples said that she wants the messages to resonate much longer.

“While this specific campaign will come to an end this semester, the concept is ongoing,” Cupples said. “We’d love for others to simply become more mindful of the time spent on their devices, and better balance that time with exercising, having meaningful conversations, spending time outdoors, playing sports or anything else that enhances their overall health and well-being.”


Page last modified October 8, 2018
Report a problem with this page