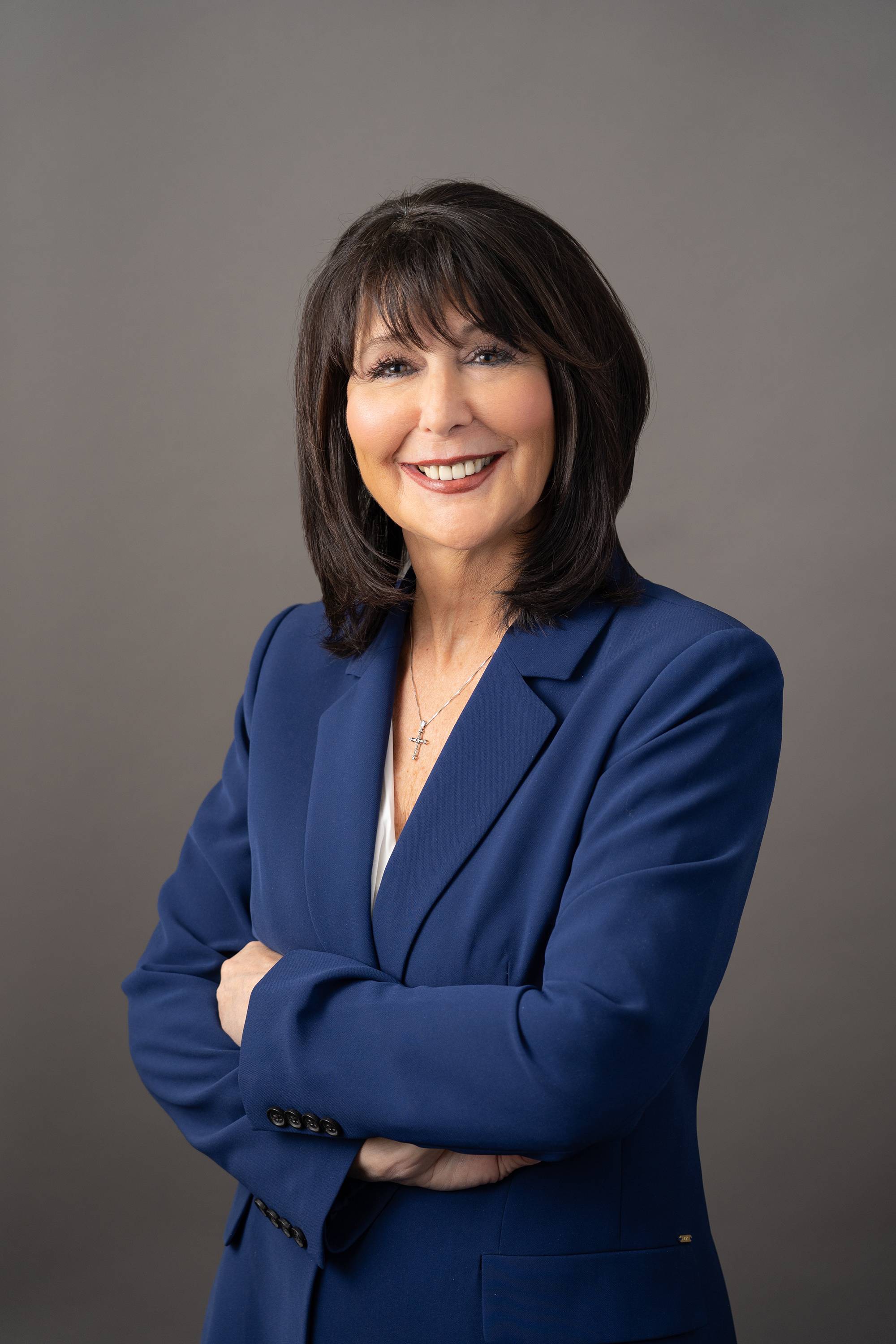 GVSU president named one of Crain's most influential women in Michigan

Crain’s Detroit Business selected Grand Valley State University President Philomena V. Mantella as one of Crain’s 2021 Most Influential Women. The publication’s editors said the award is given every five years to 100 of the most influential women, calling it Crain’s “most competitive and prestigious awards programs.”

Mantella was chosen from hundreds of nominations and newsroom suggestions of the region’s most talented and powerful women. The list consists of women in business, public policy, nonprofit work and higher education, whose work has had a significant impact on the state. 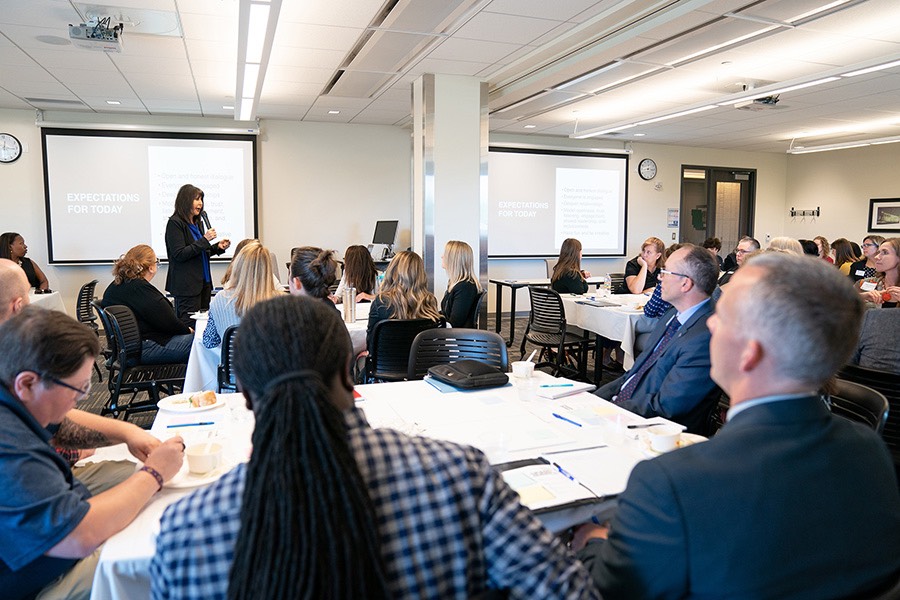 Mantella knows a key to success in any organization is the team. As she enters her third year as president, she looks at leadership opportunities at the university and believes they reflect her goals of broadening and deepening those seated around leadership tables and allowing more voices to be heard.

“My basic operating principle is that we want to invite more people into leadership,” said Mantella. “We want to say ‘yes’ to everyone who wants to lead at an enterprise level. That is reflected in the changes I’ve made to what we now call the President’s Council. Grand Valley is filled with talented, creative people and we want to give a pathway to those who want to contribute at a higher level.” 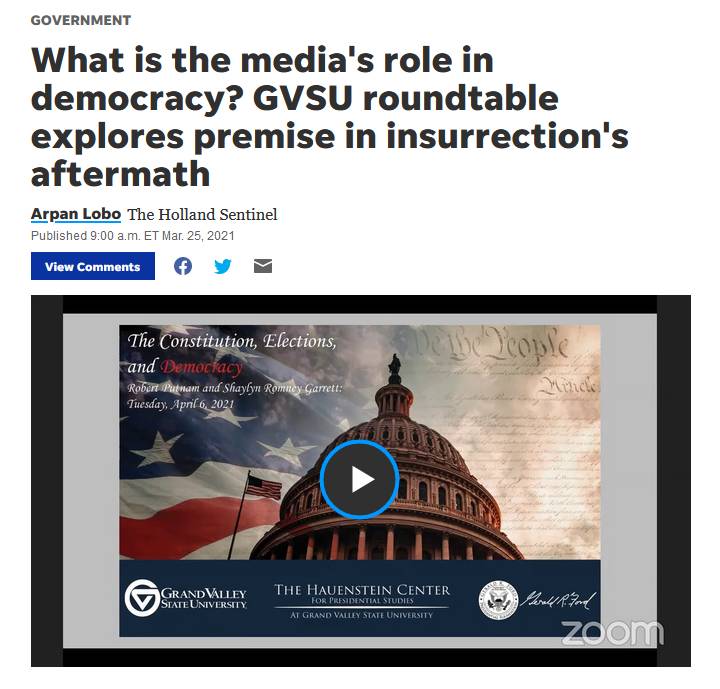 What is the media's role in democracy? GVSU roundtable explores premise in insurrection's aftermath

In the second installment of the Presidential Roundtable series, President Mantella joins former presidents Haas, Murray, and Lubbers to discuss American democracy. National journalists Lisa Desjardins and Astead Herndon provide insight into the events at the US Capitol on January 6 as well as the role of the media in building a stronger democratic society.

Desjardins, of PBS Newshour, points out that "splintered" cable news offerings have led to more audiences that are collectively less well informed. Herndon, a writer with The New York Times, discusses a lack of public trust in media outlets that have "missed a lot." 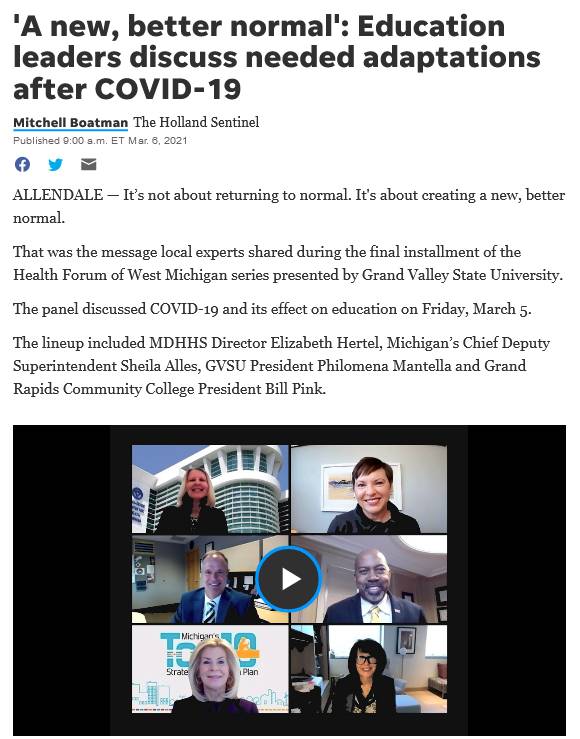 “Digital transformation or operating in a digital-based environment, I think, has to be among our core competencies we talk about along with critical thinking, problem solving and understanding diversity,” Mantella said. “It’s got to become a fundamental competency that we build in for people to be work ready. Their work will change over the course of their lives and it will be important that they are able to make the shifts as the workplace changes.” 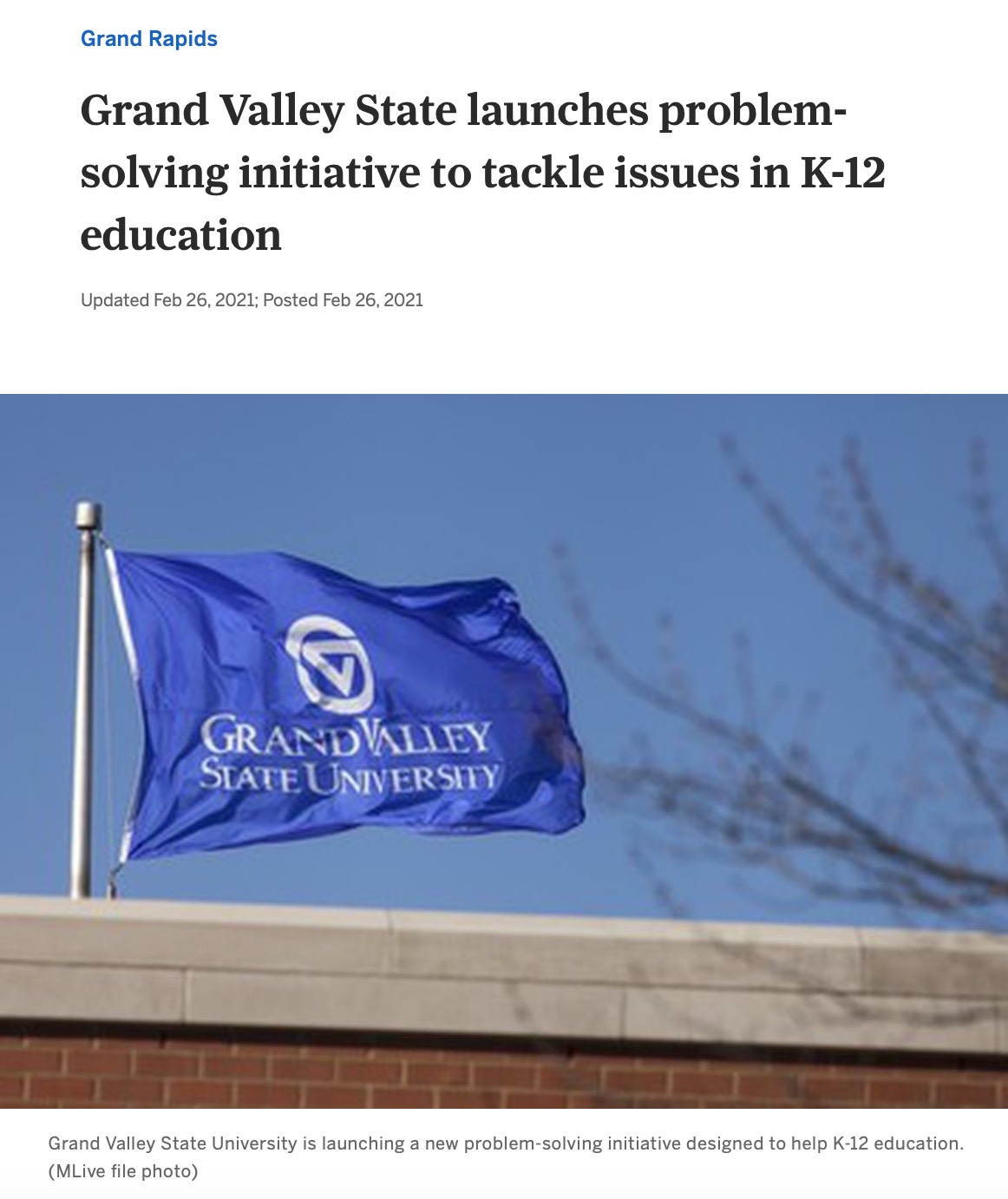 Grand Valley State University is launching a new problem-solving initiative that will unite the university’s resources with the innovative ideas of educators to find solutions for issues in K-12 education.

The NextEd Accelerator program will provide support for educators to test and implement ideas addressing the mounting needs of the nation’s K-12 students, President Philomena V. Mantella announced at a Grand Valley Board of Trustees meeting Friday, Nov. 26. 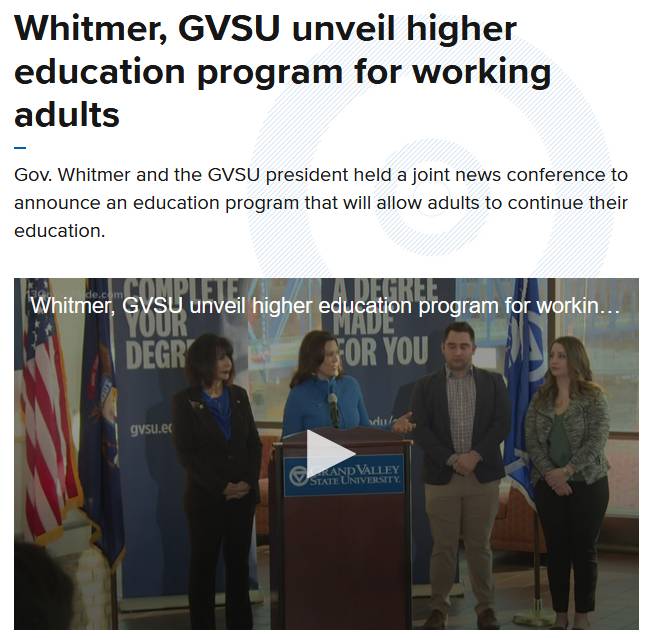 Grand Valley State University has unveiled new programs to make degree attainment easier and more affordable for working adult learners. President Mantella is joined by Governor Gretchen Whitmer, who affirms Grand Valley's efforts as a critical component in helping to ensure that 60% of Michigan adults have a bachelor's degree by 2030. "I think this program is a critical step in helping adult learners like Stec and so many other Michiganders get the skills that they need," Whitmer said. 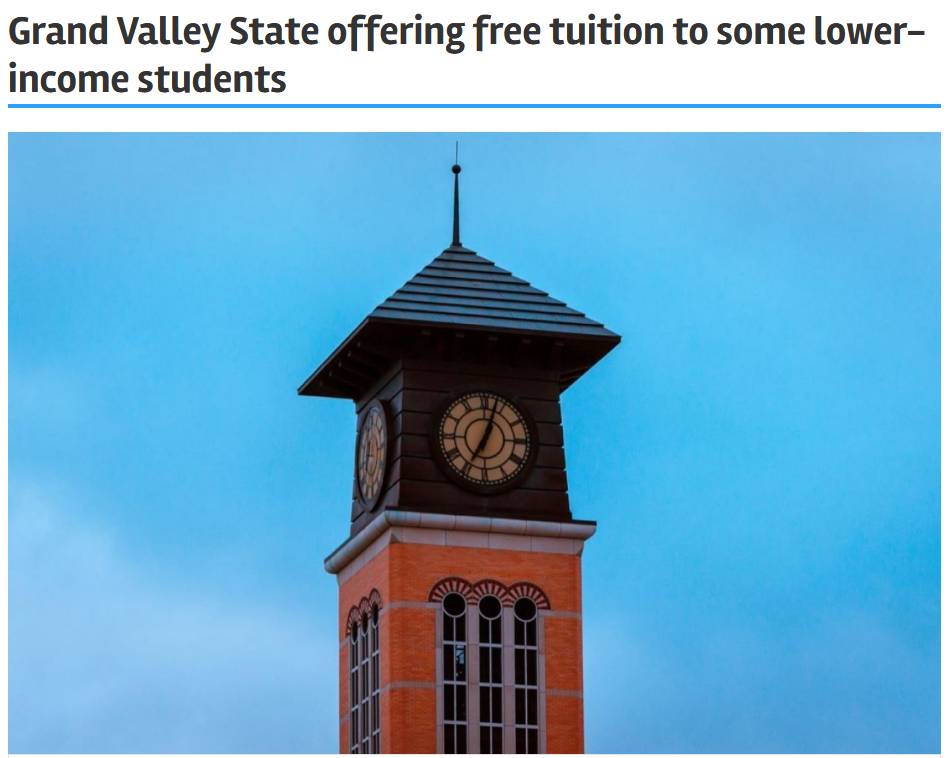 "The Grand Valley Pledge is a commitment to our communities," said Grand Valley President Philomena V. Mantella. "It is another way of assuring that we create opportunity and advance equity in the communities in which we live and teach, as well as inspire a broader movement of making higher education accessible to all." This article takes a deep dive on how the Grand Valley Pledge will make a difference for hardworking Michigan families. 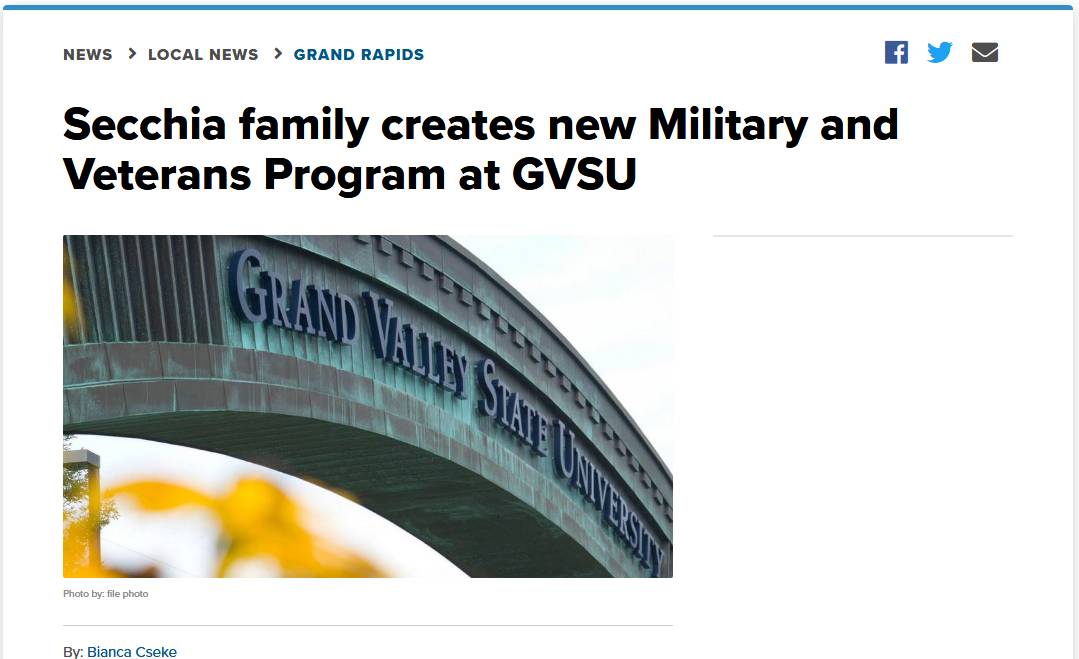 The family of the late former ambassador to Italy, Peter F. Secchia, partners with Grand Valley State University to establish the Peter F. Secchia Military and Veterans Program. Building upon the GVSU Veteran Promise, this program will provide student veterans with the support they need to succeed at university and after graduation.


Page last modified November 18, 2021
Report a problem with this page