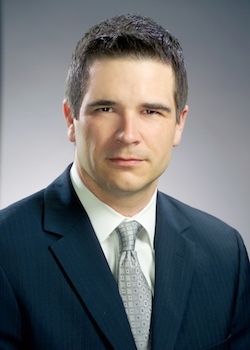 Tim Zeeb graduated in 2002 with a major in International Relations. He was recognized by GVSU College of Liberal Arts and Sciences (CLAS) through the 2017 CLAS Distinguished Alumni-in-Residence program.

I graduated from Grand Valley in 2002 with an international relations major and minors in German and political science. I’d planned on immediately attending graduate school, but decided to enter the work force full time and return to my education after I had some experience “in the real world.”  I accepted a management training position at a multi-national automotive supplier headquartered in Michigan with global operations focused in Europe and Australia. My IR background opened many doors for me and provided a platform to apply unique perspectives, knowledge and experiences across a wide range of professional situations.

During the next few years, I worked my way up in the company and also obtained my Master of Science degree in finance. Soon after, I became involved with a large French automotive supplier looking to expand into the United States via a joint venture. Ultimately, I decided to depart from my position and join the French supplier to help build its presence in the U.S. I helped lay the groundwork for their growth from a virtual startup to over $5 billion of annual revenue in North America today.

I learned that I functioned at a higher level in an environment that allowed for personal initiative, creativity and flexibility rather than a large corporate structure. Thus, in 2007, I joined Conway MacKenzie, a professional services firm focused on corporate restructuring, performance improvement and mergers and acquisitions. Over the past 9+ years, I progressed from a Senior Associate to Managing Director at the firm and have been involved in an extremely wide array of situations, many of which have drawn directly on my IR and even political science background and experience. Since 2009, I’ve been involved in nearly 100 projects, ranging from leading efforts for a minority enterprises forming joint ventures with publicly traded foreign partners, to assisting non-profit foundations with the potential combination of multiple operations, to leading restructuring and improvement efforts for companies in the automotive, aerospace, defense, medical, commercial vehicle and consumer products markets. During the global economic crisis from 2007 through early 2010, a key area of my work concerned cross-border bankruptcies for companies located in both the U.S. and Canada. In 2013, I served as a witness in complex cross-border business matters in the Superior Court of Ontario. Since 2012, I’ve served as an advisor to the U.S. Department of Justice in civil matters with over 100 plaintiffs.

Even the endeavors that have not directly drawn upon my IR background are made possible by the strong platform, broad understanding and balanced skillset that were developed during my time in the International Relations, Political Science and German programs at Grand Valley.


Page last modified November 6, 2017
Report a problem with this page