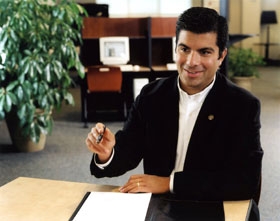 Edward Cardenas graduated from GVSU with a BA in International Relations and a minor in Spanish in 1995. He was recognized by GVSU College of Liberal Arts and Sciences (CLAS) through the 2006 CLAS Distinguished Alumni-in-Residence program.

In the world of communications, every day there is a new story to be told, a message to be shared and a secret to be revealed.

I would not have been adequately prepared to enter this industry, and be successful, were it not for the education I received at Grand Valley State University. The liberal arts based degrees, which required taking a breadth of classes, provided me a foundation of an understanding of history, economics and political science not only here in the United States but around the world.

When I received my International Relations degree in 1995, with a Spanish minor, I had four years of diverse experiences in the classroom and on campus. From my first class, which was comprised of students of all ages and backgrounds, I began my preparation for a life after college.

My professors encouraged my classmates and me to collaborate, learn from each other and push ourselves to investigate and explore new areas of study and topics. Had it not been for this urging, I may not have chosen International Relations as a major, traveled overseas to England and China on study abroad trips and taken part in groups and organizations on campus.

Learning to be open to change, exploration and challenges prepared me for the working world. After graduation I returned to Metro Detroit and began working for The Detroit News as a reporter.

This was an exciting time as Detroit was laying the foundation for its current renaissance, and the world of journalism was changing as well. Professionally I was covering a wide range of stories from astronauts heading to the Mir space station; local military deployments to support the War On Terror to embedding myself with the stage crew for the Rolling Stones during the Super Bowl. These stories came as my workplace became increasingly based on digital distribution over print.

In addition to covering the news, I helped lead ground-breaking coverage of Hispanic issues in metro Detroit, took part in digital transformation task forces and helped build the brand by representing the company throughout the region.

After nearly 13 years reporting the news, I left The News to work on the other side notebook in communications for elected officials.

My first position was communications director for U.S. Rep. Candice Miller, R-MI, where I worked with press corps in Michigan and Washington D.C. to communicate the congresswoman’s message on a variety of local and national issues. I also worked with my colleagues in the Michigan delegation to help pass important legislation which provided the Big Three with important loans to compete with foreign automakers.

I then moved from national to local to work as press secretary for newly elected Detroit Mayor Dave Bing. In this position, I worked with members of the mayor’s administration to help restore the trust of residents, the business community and other government agencies in the city of Detroit and its leadership.

After working with local, national and international news agencies to share the message of the mayor’s efforts in rebuilding Detroit, journalism came calling again and I went to work with AOL’s hyperlocal journalism start-up Patch.com.

With Patch, I helped lay the groundwork and launch a network of local news sites in southeast Michigan, mentor new hires and establish Patch as an indispensable news and information website for the communities we served.

This experience using social media, cutting-edge digital communications and old-fashioned relationship building led me to my current position with WWJ Newsradio 950 where I am a technology reporter for the radio station and CBS Detroit.com. In addition to reporting, I host monthly meetings for the business community on a variety of topics.

My post-GVSU experiences have been wide and varied. From the halls of Congress to a supersonic flight on F-16, I have been lucky to be on the front line of history and take-part in unique, once-in-a-lifetime events on multiple occasions.

How have I been able to work in these diverse positions, succeed and enjoy each opportunity? I draw upon the “Attitude Determine Altitude” pins given out be the Student Life Department during my time at GVSU. As long as I keep a positive attitude, I have found I can continue to reach new heights.