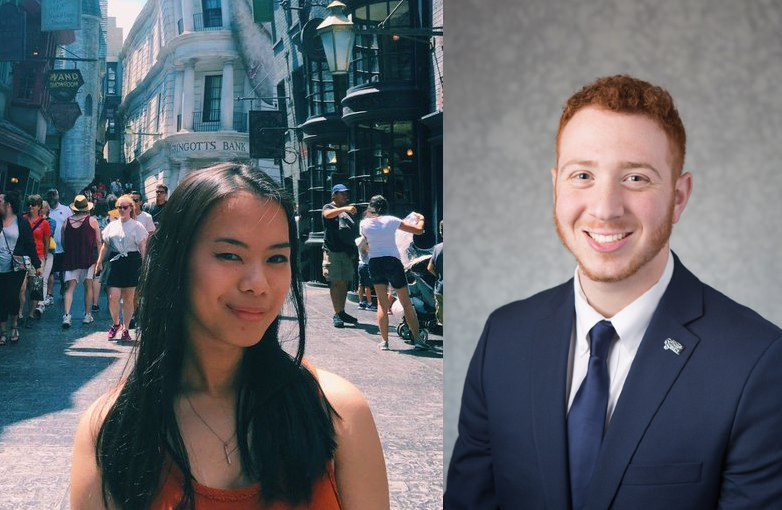 The Political Science Department is pleased to recognize Deborah Beyerlein and Morgan Mattler as our Batchelder Scholars for the 2019-2020 school year. Generously funded by the Batchelder family, the Batchelder Political Science Scholarship honors Professor John Thayer Batchelder, who taught political science at GVSU from 1969 until his retirement in 1997. Professor Batchelder’s enthusiasm for international culture and political affairs, passion for adventure, and his belief that direct experience enhances student learning, led him to lead multiple study abroad programs, including one that gave over 80 students the opportunity to study in Russia and Poland from 1976-1990.

Deborah graduated from Lutheran High School North in Macomb and calls Chesterfield, Michigan, home. At GVSU, she is pursuing double majors in Political Science and Psychology and plans to work in an area related to law, public policy, or human resources after graduation. Despite her demanding course load, Deborah has also found time to be involved in mock trial, among other pursuits.

A native of Bloomfield Hills, Morgan is majoring in Political Science with a double minor in Economics and International Relations. He has been active in the GVSU Student Senate, the Alpha Epsilon Pi fraternity, and in the Hillel student group. Morgan has also interned both for a Circuit Court Judge and a political campaign. After he finishes his studies at GVSU, Morgan hopes to find an entry level position in government, business, or in a non-profit, and eventually head to our nation’s capital for graduate school. In his long term future, he plans to pursue policy work for the Department of Defense or at the State Department.


Page last modified September 9, 2019
Report a problem with this page