One of the great pioneers of the interfaith movement in West Michigan was Rabbi Dr. Phillip Sigal. Aside from his duties at Ahavas Israel Synagogue, Dr. Sigal was instrumental in opening up the lines of communication among several religions in the area. After his untimely death in 1985, a group of local academics and interfaith enthusiasts established a memorial lecture fund in Rabbi Sigal's honor. From that time forward, IDA has brought to churches, schools and other lecture halls some of the most important voices in religion and social movements of the day.

Allie Young is a citizen of the Diné (Navajo) Nation from the Northern Agency of the reservation in Northern New Mexico. She is a storyteller and writer on a mission to increase authentic representation of Native Americans in TV, film, and mainstream media by sharing the stories and traditions of her people that helped and continue to help them persevere in a world where they are largely invisible, underrepresented and misrepresented. She’s developing projects, one of which she’s pitched to Netflix and Amazon Studios. Recently, she founded Protect the Sacred, a grassroots organization that focuses on educating and empowering the next generation of Navajo and Indian Country leaders, promoting the Indian Country Hero Challenge and spreading the “Stay Home” message to protect tribal nations from COVID-19. In her work and current role as Director of Protect the Sacred, she makes certain the Native voice is at the table and in every conversation, especially the voices of Indigenous youth and womxn.

Considered one of the leaders of the next generation of Dharma teachers, Lama Rod Owens has a blend of formal Buddhist training and life experience that gives him a unique ability to understand, relate and engage with those around him in a way that’s spacious and sincere. Lama Rod's Interfaith Leadership lecture took place virtually on October 7, 2020.

"Islamophobia: A Threat to All"

Petra Alsoofy is the Outreach & Partnerships Manager at the Institute for Social Policy and Understanding (ISPU), where she strengthens valued partnerships and forges new ones with organizations who share ISPU’s goal of strengthening Muslim communities and building understanding. Petra’s work includes working with ISPU’s large network of scholars and sharing research with policymakers, community leaders, faith leaders, educators, and the public to equip them to make informed decisions about American Muslims. She also serves as the vice president of the Michigan Center for Civic Engagement’s Board of Directors and as a member of the American Association for State and Local History’s Religious History Committee. Petra has been a leader in interfaith work and public education for more than 15 years and is a graduate of Grand Valley State University where she earned a BA in political science.

Petra spoke at our Interfaith Leadership Lecture on March 9, 2020. 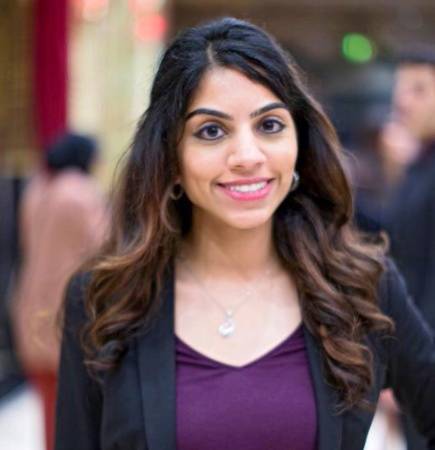 "Interfaith Leadership in the 21st Century"

Kinza Khan is a native Chicagoan, born and raised.  She has been a speaker with Alumni Speakers Bureau at Interfaith Youth Core for several years, speaking at various events, schools, and congregations. As her full-time work, Kinza is an attorney at Life Span, an organization committed to helping survivors of domestic violence and sexual assault. She also serves as an educator and trainer for Heart Women & Girls, an organization that provides education about and advocacy for issues of sexual health and sexual violence in Muslim American communities. Kinza completed her undergraduate studies in International Studies from University of Illinois at Urbana Champaign, and then went on to receive her Juris Doctorate at DePaul University College of Law. She has worked in issues of child welfare, women's rights, and domestic violence, and is passionate about these causes as well as interfaith work and community development. As much as she enjoys speaking in court, Kinza prefers speaking in panels and workshops, and about her own experiences, interfaith identities, and today's societal issues.

The Multitudes of a Single Muslim Identity - TEDx Talk

"Social Justice as a Faith Based Imperative"

Reverend Dr. Susan Henry-Crowe is the chief executive of the United Methodist Board of Church and Society which is the social justice arm of the Methodist church.  In this position, she leads the church on issues including civil and human rights, economic justice, environmental justice, health and wholeness, peace with justice, and women and children.

"Islamophobia, Hate Crimes, and the Racialization of Religious identity in America"

Dr. Simran Jeet Singh is an Assistant Professor in the Department of Religion at Trinity University and Senior Religion Fellow for the Sikh Coalition. Simran holds graduate degrees from Harvard University and Columbia University, and for the 2017-2018 academic year will be the Henry R. Luce Post-doctoral Fellow of Religion and International Affairs at the NYU Center for Religion and Media. He also currently serves as a Truman National Security Fellow for the Truman National Security Project. As a Sikh-American, scholar of religion, and activist for social justice, Singh explores the way the racialization of religious identity has affected communities locally and nationally, as well as how an interfaith community can respond to discrimination and violence.

Simran is a prolific writer who contributes frequently to various news outlets and digital platforms. He has become a consistent expert for reporters and news outlets around the world in television, radio, and print media. Singh also serves on the board for the Religion Newswriters Association, the premiere organization for religion journalists in the country.

Read the Lanthorn's article on the event here.

“Racial and Interfaith Justice: A New Vision for Leadership at the Intersections"

Named one of 15 Faith Leaders to Watch by the Center for American Progress, Rev. Jennifer Bailey is an ordained minister, public theologian, and emerging national leader in multi-faith movement for justice. She is the Founding Executive Director of the Faith Matters Network, a new interfaith community equipping faith leaders to challenge structural inequality in their communities. Jennifer comes to this work with nearly a decade of experience at nonprofits combatting intergenerational poverty. Jennifer believes that people of faith can be game changers in the fight to build a more just, compassionate, and peaceful world.

An Ashoka Fellow, Nathan Cummings Foundation Fellow, On Being Fellow and Truman Scholar, Jennifer earned degrees from Tufts University and Vanderbilt University Divinity School where she was awarded the Wilbur F. Tillett Prize for accomplishments in the study of theology. She writes regularly for a number of publications including On Being, Sojourners, and the Huffington Post. Her first book, tentatively titled Confessions of a #Millennial #Minister is currently under contract with Chalice Press. Rev. Bailey is an ordained itinerant elder in the African Methodist Episcopal Church.