Research Interests
Cumulatively, Dr. McKee’s research agenda highlights how transnational adoption expands the concept of diversity as part of its investment in reshaping discourses concerning racial, ethnic, cultural, and national identities through the use of the case study of US-Korean adoptions. Her scholarship is situated at the nexus of Adoption Studies, Asian American Studies, and Women’s, Gender, and Sexuality Studies. This work also engages the fields of Cultural Studies and American Studies

Dr. McKee’s book manuscript, Disrupting Kinship: Transnational Politics of Korean Adoptees in the United States, interrogates the institutional practice of international adoption and traces the origins of what she terms the transnational adoption industrial complex. In doing so, Disrupting Kinship challenges the portrayal of international adoption as solely an act of humanitarianism and child rescue. Her second project explores how racialized and sexualized depictions of Asian/Asian American women circulate within the U.S. as a result of American militarism abroad and its impact on the female adoptee body.

In addition, she partnered with KAAN (the Korean American Adoptee Adoptive Family Network) on “Examining the Past, Considering the Future: The Impact of KAAN (Korean American Adoptee Adoptive Family Network) in the Lives of Adult Adoptees and Adoptive Families” combines her interest in Korean adoption and Asian American Studies as well as her commitment to service and activism in marginalized communities (e.g. adoptee communities and communities of color). Surveys of adult adoptees and adoptive parents in combination with oral histories of past and present leader of KAAN and KAAN stakeholders contributes to the expanding knowledge concerning adult Korean adoptees racial/cultural socialization in childhood and adulthood and the role of cultural organizations such as KAAN in adoptive parents’ comprehension of their child(ren)’s racial/cultural identities.

Dr. McKee also continues to develop a new project that explores the legacy of racialized and sexualized depictions of Asian/Asian American women in the lives of female adoptees from Asia. The Orientalist gaze is a legacy of Western militarism and colonization and remains inextricably linked to racialized conceptualizations of sexuality. While Asian American and feminist scholars explore the overall impact such fetishization and Orientalism has on Asian/Asian American women, a study on how these stereotypes effect adoptees from Asia has yet to be completed. To fill this gap, this project elucidates how these hypersexual, racialized images shape the characterization of female Asian adoptees in the media and within the family.

Complementing the above-mentioned scholarship on Korean adoption and representations of Asian Americans in popular culture is the anthology, Don’t Air the Dirty Laundry: Reflections of Women of Color on Graduate School, which she is co-editing with Denise Delgado, a Ph.D. Candidate from the Department of Women’s, Gender, and Sexuality Studies at The Ohio State University. This volume will serve as a tool for women of color doctoral/masters students and their peers contemplating entering academe. A deeper discussion of the graduate school experience is needed to aid the professional growth of women of color and create a sustained pipeline from graduate school to the academy. Her involvement in the anthology reflects her investment in supporting the next generation of scholars of color in the academy.

Other Interests
Dr. McKee is the Assistant Director of KAAN (the Korean American Adoptee Adoptive Family Network) and serves on their Advisory Council. She served as the local/regional coordinator for the 2014 KAAN conference in Minneapolis, MN. Dr. McKee currently contributes to The Lost Daughters, an adoptee-centric writing collective. She previously wrote for Gazillion Voices, an online magazine created for adoptees and their allies to discuss topics important to the adoption community.

As an adoptee and woman of color, she is deeply devoted to supporting students of color and other marginalized communities. This is particularly salient given her location in the Midwest where often she is one of the few Asian American faculty students engage with in the Humanities. There are currently no Asian American Studies courses taught on a regular basis. In Fall 2015 she will teach a one-credit course, The Hypersexual Female Asian Body, which explores the racialized and sexualized depictions of women of Asian descent in US popular culture. She also will direct an independent study, “Introduction to Korean Adoption Studies,” with an undergraduate student. Her overall commitment to mentoring students of color for success is seen in my work with the Ronald E. McNair Scholars program as a mentor to Dionna Cheatham, an undergraduate student double-majoring in Public Administration and Women’s, Gender, and Sexuality Studies 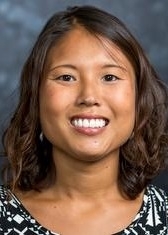 
Page last modified February 24, 2020
Report a problem with this page