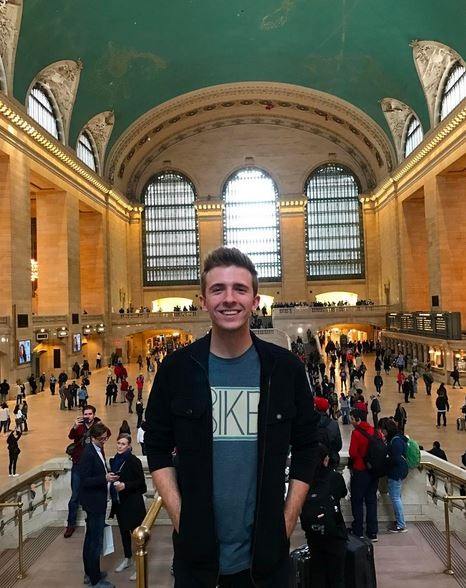 A Grand Valley student spent his summer in New York City, aiding the Department of City Planning in its initiatives to provide more affordable housing to city residents.

Spencer Wejrowski, a senior majoring in geography and sustainable planning, assisted the department’s North Shore team of the Staten Island borough office with land use applications and large planning initiatives. One of these initiatives included the Bay Street Corridor Neighborhood Plan, one of the many planning initiatives to create affordable housing citywide as a result of Mayor Bill de Blasio’s Housing New York plan. The Housing New York plan has financed 77,651 affordable homes since its inception in 2014 - breaking records for the most affordable housing produced in any three years in New York City's history.

Wejrowski said that New York City is unique because it is the only city in the U.S. to pass legislation that requires certain sections of the city to require that a percentage of the residential units in development projects remain affordable. This is also known as "Mandatory Inclusionary Housing."

“State Island has long been looked at as a cheaper alternative to Manhattan or Brooklyn, so Bay Street Corridor will be an MIH zone" Wejrowski explained. "Bay Street is a very complex and somewhat controversial project that required a lot of input from a variety of city agencies.”

One of Wejrowski’s larger projects was conducting a geographic information systems (GIS) analysis on the Rosebank neighborhood of Staten Island. This project required him to determine how many potential housing units could be added to neighborhood.

“If the square footage of a lot in a neighborhood is 10,000 square feet, for example, and there is a minimum lot area requirement of 2,500 square feet, a developer could technically buy that lot, demolish the existing home, subdivide it into four new lots and build four new homes,” said Wejrowski. “This neighborhood was very passionately concerned about over-development.”

Wejrowski also participated in site visits and attended public hearings and meetings with developer applicants during his experience. Wejrowski said his classes in Grand Valley’s geography and sustainable planning program helped lay the foundational knowledge he needed to excel in his internship.

“I needed a solid background in geographic information systems, graphic design, and an understanding of global climate change and resiliency, considering how Hurricane Sandy inspired policy change within the city of New York,” Wejrowski said.

City planning has always been a passion for Wejrowski, and he said this internship experience provided clarity about his career path.

“Politics, policy, business, the environment, weather, transportation, housing, community outreach, gentrification, public health — they all have a hand in planning and they are all important to consider, even in cases as small as a homeowner expanding their house,” he said. “The decisions that a planner faces ultimately shapes the world around them, and no one does this better than New York City. If there is anything that this internship gave me, it's reassurance that I am studying the field I need to be in.”