The distinctive and colorful gowns worn during academic ceremonies originated in medieval European universities. In the 14th century, their use had become so common that universities, including Oxford University in England, required their faculty to wear them in public places. Gowns may have been necessary for warmth in the unheated buildings used by medieval scholars, or they may reflect the strong ties that existed then between academic and religious institutions.

In the late 19th century, American universities formed a commission that prepared a code for academic costumes. That code has been updated and is used today by most colleges and universities. Academic dress consists of a gown, cap, and hood, which indicate the degree held by the wearer and the college or university that awarded that degree.

The gown for the bachelor's degree has pointed sleeves and is worn closed in front. It may be black, but is often the color of the university. The gown for the master's degree is typically black and has longer oblong sleeves, with a large section that hangs below the wrist. These are still used today to store a variety of useful objects. The doctor's gown is very full and has large, full sleeves. The front is trimmed in velvet, and there are three bars of velvet on each sleeve. The velvet may be black or may be the color of the wearer's degree. Although the standard doctor's gown is black, many American universities have adopted gowns that have one or more of the school colors. Some of these gowns in the academic procession today could be from the University of Michigan (light blue with gold piping), Michigan State University (green), Harvard University (red), and Duke University (blue). 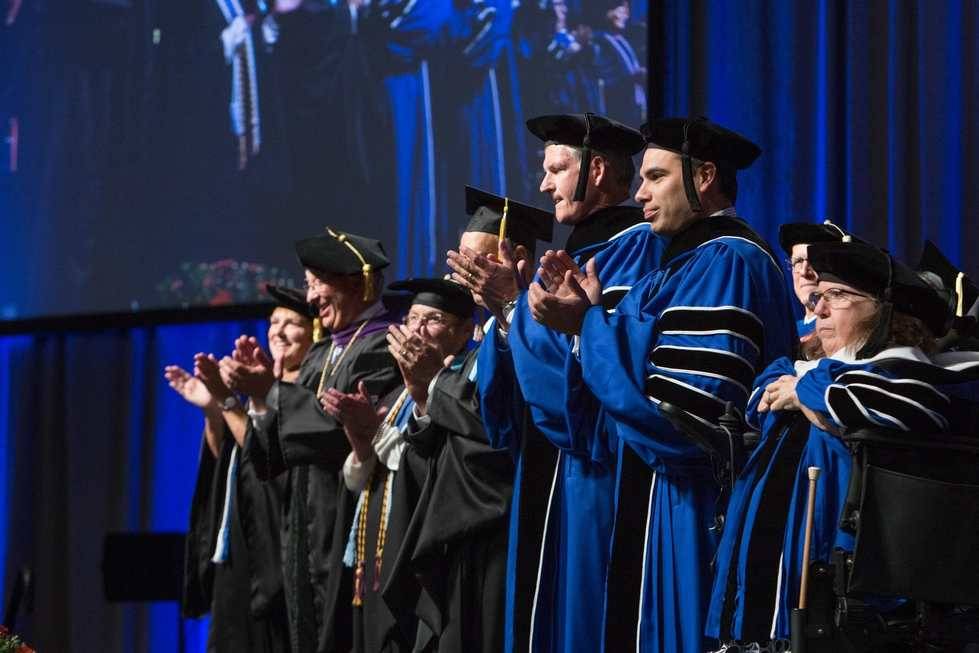 Master's and doctor's degree holders wear a hood draped over the shoulders and back. Both are trimmed in velvet of a color that signifies the wearer's degree. Some common colors you might see in the procession are:

A holder of the Doctor of Philosophy (Ph.D.) degree wears the dark blue of philosophy no matter what his or her specialty is.

Also known as mortarboards, caps complete the academic costume. The standard cap is flat and square with a tassel fastened to the center of the stiff top. Bachelor's and master's tassels are black or the color of the gown. Doctor's tassels are shorter and gold. Once the bachelor's degree is conferred, the tassel is worn on the left. In recent years, some American universities have adopted soft velvet caps for holders of their doctors degrees.

The office of mace bearer is ceremonial, deriving from medieval times in England when officials taking office or opening their courts felt the need for protection. Since the sixteenth century in England, and in America since colonial days, it has been a symbol of office only.

In commencement ceremonies, it is carried by a distinguished member of the faculty who usually precedes the entire procession. Its placement in, and removal from, a designated place of honor signify the opening and closing of ceremonial sessions.

The Grand Valley mace was used for the first time in the 1983 commencement ceremonies. The mace was designed by Beverly Seley, GVSU associate professor of art, and executed by students in her metalsmithing class. 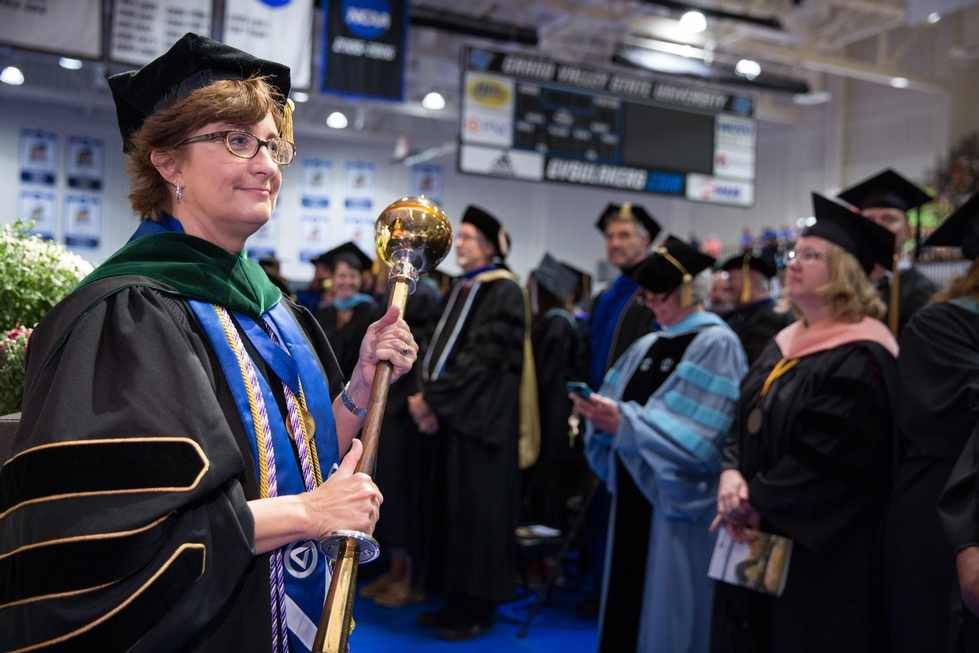 Page last modified April 21, 2020
Report a problem with this page