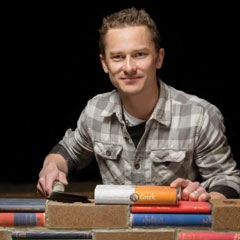 "In the first year here, just beginning with Greek and Latin, I really became enamored with the study of the languages themselves," he said. "Language is the seed of all human thought so I've always considered it to have a really high place."

Fast forward three years and Hebrew, German and French now sit alongside Greek and Latin on ten Haaf's linguistics resume. ten Haaf said his love for Classics is rooted in the rich historical texts he studies that are still applicable in the world today.

"It's a huge collection of the finest thoughts from antiquity until now on the really important human issues," ten Haaf said. "Why do bad things happen to seemingly good people? What are Gods' feelings towards us? These questions are always going to be relevant. Material that eloquently and artfully addresses all of these issues is a real treasure I hope we never lose."


Page last modified May 26, 2015
Report a problem with this page