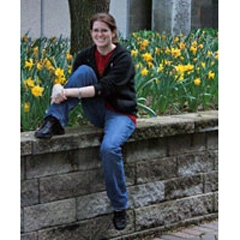 Kate Allen graduated magna cum laude in 2008 with a BA in Classical Languages and matriculated to the PhD program in Classics at the University of Michigan. She is currently working on her dissertation, which explores the role of odor in Roman thought and literature. Kate is interested in Latin literature from all periods, but is especially fond of Plautus and is maintaining a love-hate relationship with Martial. In addition to sense perception, her research interests include Roman comedy, authorship and readership as depicted in Latin literature, and death and dying in the ancient world. When not dissertating, Kate can usually be found sewing or working on her fantasy crime novel, usually accompanied by large cups of decaf coffee. Tentative dissertation title: “Stop and Smell the Romans: Odor in Roman Thought and Literature.”

Kate came to Grand Valley in 2004 as a writing major and ended up in the Honors College as a classical languages major. For her Honors Senior Project she studied the Latin poetry of Martial, who lived in the second half of the 1st century A.D. She transcribed and translated many of his poems from a rare Renaissance edition in Grand Valley’s Special Collections located in Seidman House on the Allendale Campus. The resulting work, entitled “Form and Function: A Study of Renaissance Commentaries and the Seidman Library’s Calderinus Incunabulum,” earned the Outstanding Honors Senior Thesis Award.

With encouragement from her advisor, Prof. Peter Anderson, she also wrote a paper, “What's that smell?': Odor in Martial's Epigrammata," which she was invited to deliver at the 2008 meeting of the Southern Section of the Classical Association of the Middle West and South (CAMWS-SS) at the University of North Carolina at Asheville.

“I first got interested in Classics through a Latin class as a first-year student,” she says. “I learned more English grammar in that class than any previous classes in English. As a writer, I found that very valuable.”


Page last modified March 6, 2015
Report a problem with this page