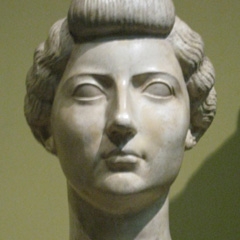 Andrew Lund '13 is pursuing postgraduate study in Classics at the University of Cincinnati. Andrew was a recipient of the 2013 Outstanding Honors Senior Project Award by the Frederik Meijer Honors College. His project, "Prometheus Stories: Promethean Myth and Mythopoeia for Adjudicated Students," was supervised by Prof. Diane Rayor.

In 2012 Andrew was featured in a GVSU Success Story about an undergraduate research project that produced a peer-reviewed conference presentation. It is reprinted here:

Andrew Lund’s portrayal of the first empress of Rome captured the attention of a panel of judges at a national Classics convention, but the student said it was made possible by faculty support every step of the way.

Lund, a senior from Highland, traveled to Tallahassee, Fla. for the 2012 meeting of the Southern Section of the Classical Association of the Middle West and South (CAMWS-SS) to present his paper, “Power, Présages, and Portrayal: Suetonius’ Representation of Livia” to a panel of professionals in his discipline. The paper expanded the portrayal of the Roman empress, Livia Drusilla.

Lund said Grand Valley created a support system for his endeavor to have his paper judged in front of the national panel. “Barbara Flaschenriem, associate professor of Classics worked closely with me on my paper, but the entire Classics department gave me feedback at Student Scholar Day,” he said. “To prepare for the national conference, many Classics professors were willing to help by performing mock interviews with me.”

Melissa Morison, associate professor of Classics, assisted Lund with preparation for his presentation. “It’s unusual for undergraduates to give solo presentations at professional conferences,” she said. “In the physical sciences students often work with faculty and other students on large collaborative projects, and present together at national conferences, but in the Classics it’s all individual work.”

Lund wasn’t always interested in Classics, but his honors sequence, Classical World, sparked an interest that drove him to declare it as his major.

“I chose to study Classics because the field is so enrapturing,” said Lund. “The department has helped me to foster and to develop these interests into a true passion for the discipline. Also, I want to express gratitude to Grand Valley’s Office of Undergraduate Research and Scholarship for help, through the Academic Conference Fund, to defer the cost of presenting at the conference.”

Lund also received the Manson A. Stewart Scholarship from CAMWS in 2010. The scholarship is awarded to outstanding students studying Classics. In order to receive the scholarship, the student must be nominated by faculty members from their school and go through an application and essay process.

“I would like to continue working on this paper as part of my masters thesis or doctorate dissertation,” said Lund. “But right now, I want to focus on applying for graduate school.”


Page last modified March 3, 2015
Report a problem with this page