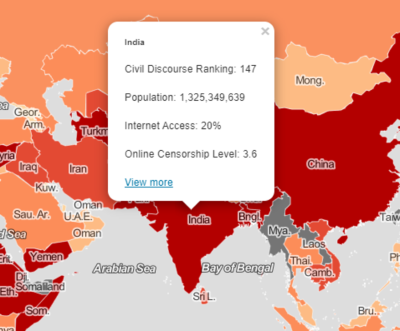 A first-of-its-kind map displaying civil discourse ratings around the globe is set to launch later this month.

The Global Civil Discourse Map assigns a civil discourse rating to more than 170 countries around the world. The map ranks countries in terms of the quality of their civil discourse attributes like internet access, online censorship level, and Reporters Without Borders ranking.

The map is a collaborative project between Jeff Kelly Lowenstein, Padnos/Sarosik Endowed Professor of Civil Discourse, and a team of GVSU students from his IDS 350 course and the Computer Science Program.

Kelly Lowenstein said the map helps illustrate the "tension between, on the one hand, national and international promises of freedom of speech and press freedom, and on the other, the lived reality of residents in those countries. It has the potential to provide a baseline for conversation of what civil discourse looks like in different countries around the world."

Lisa Perhamus, Director of the Padnos/Sarosik Civil Discourse Program, said, "Building on the national focus of part one, part two of this year’s symposium has a global focus. It is a continued effort to share diverse perspectives that lead to more understanding, empathy, and mutual respect. We hope that the launch of our Global Civil Discourse Map Project will encourage community members to engage in positive, thought-provoking conversation." RSVP for the event


Page last modified March 12, 2021
Report a problem with this page