Welcome to the archive of the annual Art Gallery Music Composition Competition at Grand Valley State University. This competitive event began in 2009, with the generous support of Larry and Elaine Rutowski Shay, and has seen premiered 257 student-composed music compositions resulting in over $6,500 in prize money awarded. Each year GVSU student composers are invited to create 60-second compositions that are based on artwork displayed in the college art gallery. Compositions are submitted anonymously, and then rehearsed and performed by the GVSU New Music Ensemble. A panel of judges and the audience select prize-winning works, which are announced immediately after the performances. Our first competition in 2009 corresponded with the gallery show, The Paris of Touoluse-Lautrec, Bonnard, and Vuillard. Subsequent shows paired compositions with artifacts from the American Museum of Magic, space photography, Southwest Pueblo Indian pottery, an Art Prize mural, poems and images honoring the Great Lakes, a room-size piece of 2,000 images, and photography of the ravines of Grand Valley. For our anniversary event, the compositions are based on the art in the recently renovated Louis Armstrong Theatre lobby in the Haas Center for the Performing Arts.

As we reflect on the many performances and memories throughout the years, what has been a constant is the enthusiasm our audiences have shown for this process of bringing brand new music to life. No matter if the music is experimental, more traditional, or even unclassifiable, the efforts of the composers and performers has always been valued and appreciated. Thank you to our audience for their continued support of the creative arts, a vital component of the human spirit.

The New Music Ensemble at Grand Valley State University is an undergraduate ensemble that promotes the music of our time through commissions, tours, recordings, collaborations, outreach events, and workshops. Founded in 2006 by its director Bill Ryan, the ensemble not only prepares students for careers that include contemporary music, but helps them to become exceptional educators, advocates, and leaders in the field.

This event is made possible each year with the generous support of Larry and Elaine Rutowski Shay.

The Paris of Toulouse-Lautrec, Bonnard, and Vuillard

For many people, the posters of Toulouse-Lautrec and Bonnard are emblematic of lithography in fin-de-siècle Paris. Also included were lithography-enlivened book jackets, advertisements, sheet music, literary journals, as well as humor magazines.

Over one hundred years ago pottery making by Pueblo Indians in the American Southwest was transformed from the manufacture of utilitarian objects for everyday use to craft production for the tourist trade. Featured in this exhibition are distinctive ceramics from several pueblos, collected in the late 19th through the mid 20th century, including works by Maria Martinez, one of the most famous Native American potters of the 20th century. This is the first of a series of exhibitions planned by the GVSU Art Gallery that will focus on the rich diversity of the Native American cultures of the Americas. (works created in collaboration with student choreographers)

Photographic essays by GVSU faculty artists Dellas Henke, Stanley Krohmer and Anthony Thompson, explored the beauty and complexity of the landscape, the effects of erosion and our complex relationship to the Allendale Campus Ravines. Complimenting the exhibit was work in a variety of media by students and additional faculty. Held in conjunction with Grand Valley's 50th Anniversary.

Mystery, Magic, and Mayhem: Wonders from the American Museum of Magic

Magic has long been a topic of both interest and controversy that has enthralled audiences for hundreds of years. For some, it’s spiritualism and for others, it’s strictly a performance art. This exhibition of magic history provides a window into the worlds of illusion, conjuring, legerdemain, mentalism and escape artistry. On loan from the American Museum of Magic in Marshall, Michigan, are over thirty stunning graphic visuals and related objects associated with legends such as Thurston, Houdini, and Michigan’s own Harry Blackstone, Sr. 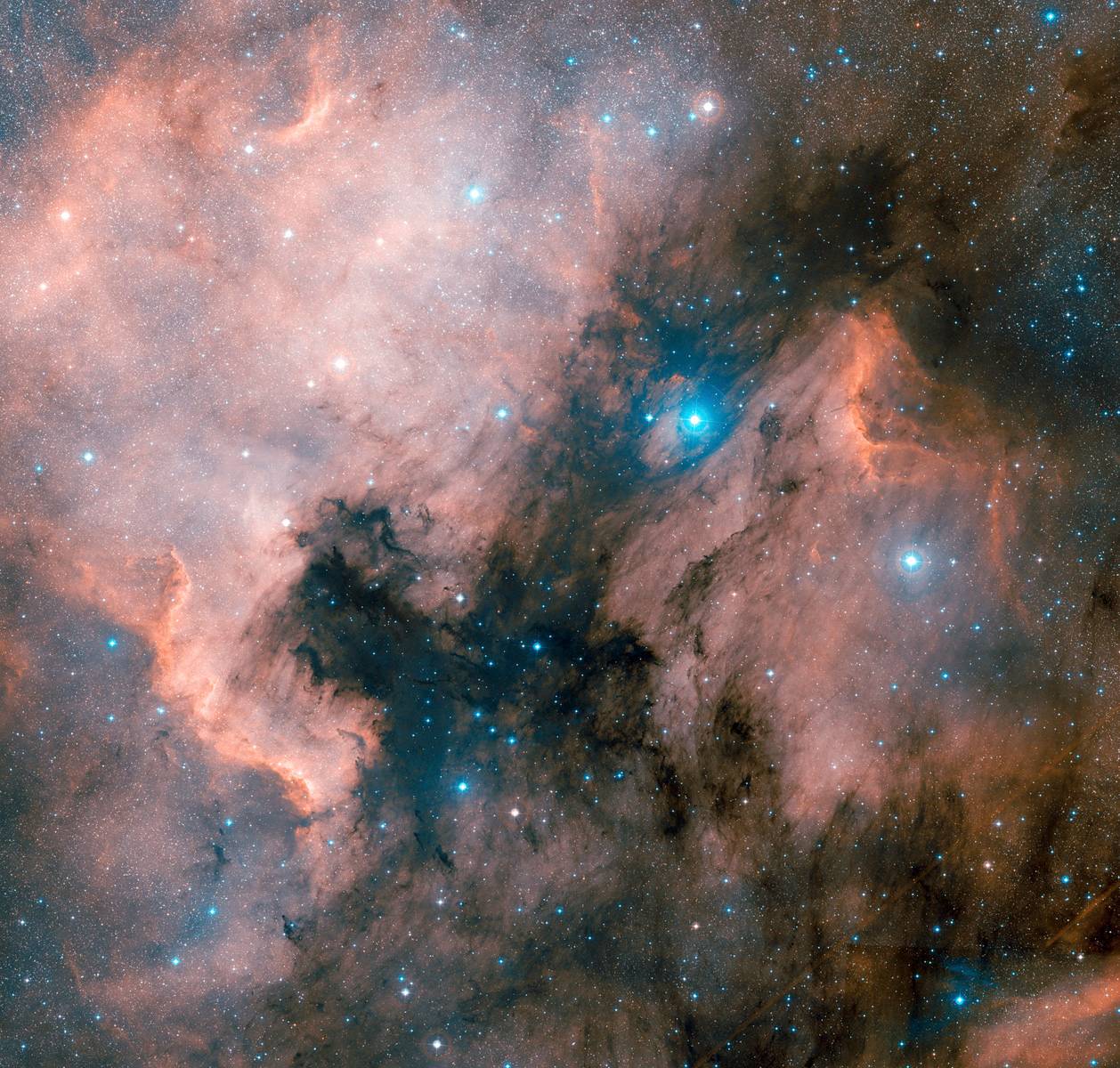 From the earliest black-and-white photographs of the moon to the most recent images taken from the Mars Curiosity rover, The History of Space Photography exhibition features 50 noteworthy images from the last 50 years of space exploration. These stunning and beautiful visuals, including video projections of celestial animations, were captured by astronauts, astronomers, and data visualization experts. Grand Valley State University Art Gallery is pleased to share these historic cosmic images with you. The History of Space Photography exhibition is organized by the California/ International Arts Foundation and is guest curated by Jay Belloli, former Director of Gallery Programs at the Armory Center for the Arts, Pasadena, CA.

Composition Title: Emergence
Based on the NASA photograph titled: Earth and Moon

Eamon Carmody is a composer, photographer, and writer from Marne, MI. Born and raised in the Michigan countryside, he finds much of his inspiration in the natural environment. With all of his work, he strives to evoke feelings of peace and tranquility, to create a quiet place in a busy world. He holds degrees from Grand Valley State University and the University of Houston, and he has collaborated with various groups including the GVSU New Music Ensemble, the AURA Contemporary Ensemble, and HGOCo. Currently, he splits his time between working in public administration and developing assorted creative projects through Susurrus Arts.

Richard Arndorfer is a composer and performer. He studied oboe, composition, and psychology at Grand Valley State University and studied composition at Bowling Green State University where he currently teaches. He has had music read or performed by the Donald Sinta Quartet, Yarn/Wire, Fifth House Ensemble, the Toledo Symphony String Quartet, the Toledo Symphony Orchestra, and Wade Selkirk. He enjoys reading, watching movies, and being in nature.

Composition Title: Halcion
Based on the NASA photograph titled: Central Region Of The Milky Way Galaxy

Ben De Leeuw is a lifelong resident of Grand Rapids– barring two years of school at North Park University in Chicago, where he earned his Masters degree in vocal performance. Ben has stayed connected to GVSU, putting in a semester as a music professor and working another semester or two in the office of the Department of Music, Theatre, and Dance; the Ada Conservatory of Music might also be effectively characterized as a satellite campus. 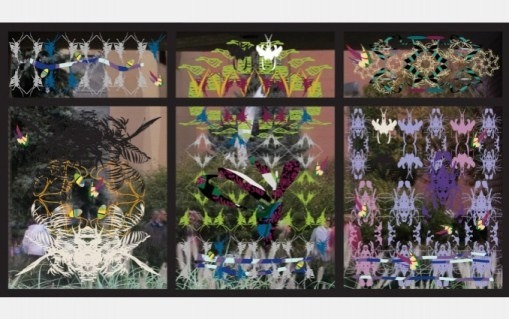 River Tattoo is a 85' x 8' vinyl mural installed on GVSU's Eberhard Center for ArtPrize in Fall 2014.

River Tattoo celebrates the Grand River and the Blue Bridge spanning it. It is made from thousands of pieces of adhesive vinyl applied directly to the glass. The vinyl shapes are based on ink drawings of animal-like forms, collages made from adhesive shelf paper, and photographs of ordinary houseplants, digitally hybridized, mirrored, and multiplied. The river flows through it in a pattern of rhythmic lines rising and falling around the bend in the building, with the bridge reflected in them. The mural’s clouds, its flora, its teeming bestiary of creatures both sinister and benign seem to inhabit the world reflected in the glass, suggesting that the space around us is full of possibilities we have not yet begun to imagine.

Composition title: The Velocity of Repetition
Based on the installation titled: River Tattoo

Julia is a doctoral student in oboe performance and in the 2019–2020 season, she will appear with the Kankakee Valley Symphony Orchestra, Sinfonia di Camera, the Champaign-Urbana Symphony Orchestra, and the Illinois Modern Ensemble. She holds graduate degrees from McGill University in Montreal, where she regularly performed with the McGill Symphony Orchestra and worked as a teaching assistant.

Composition title: Stencils
Based on the installation titled: River Tattoo

Ashlee T Busch is a composer, performer, remixer, arranger, and educator based in Mesa, Arizona. Ashlee is currently pursuing her DMA in music composition from Arizona State University where she is a graduate teaching assistant in music theory and aural skills. Ashlee is also adjunct faculty at Scottsdale Community College. Ashlee most enjoys collaborating with other artists in poetry, dance, installation art, video, and more. Such collaborations have included residencies with East Coast and Midwest universities, album production with video game remixing company Materia Collective LLC, publishing with education publisher Leading Tones LLC, and collaborations with ensembles premiering her work across the United States.

Composition title: Follow the Free Flow
Based on the installation titled: River Tattoo

Weston M-A Bernath earned his bachelor of music education at Grand Valley State University where he studied double bass performance and composition. He is currently finishing his masters of arts in music theory at Western Michigan University, which is scheduled to be completed in April of 2020 along with his thesis, “Metal Mayhem to Music Theory: The Use of Heavy Metal Music in Collegiate Music Theory Instruction”. Bernath is additionally applying for doctoral programs in music theory and composition. His research interests include activity-based music theory education methods, metal music and late Twentieth-Century/ Twenty-first Century music analysis. 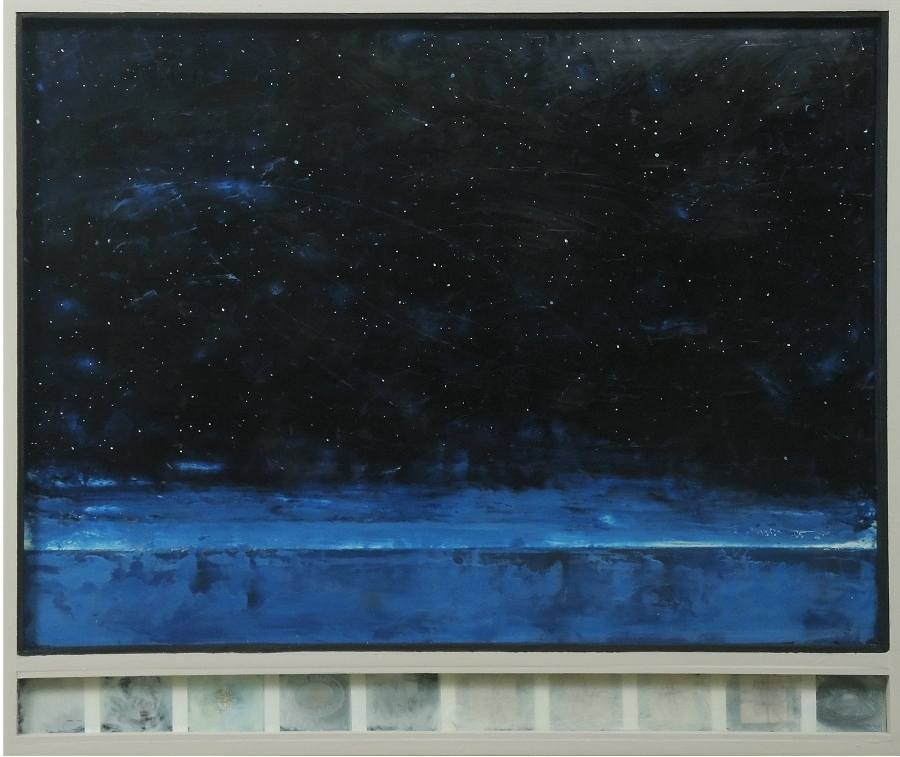 Graceann Warn
The Beauty of Mystery
Oil, encaustic and paper on wood
2015 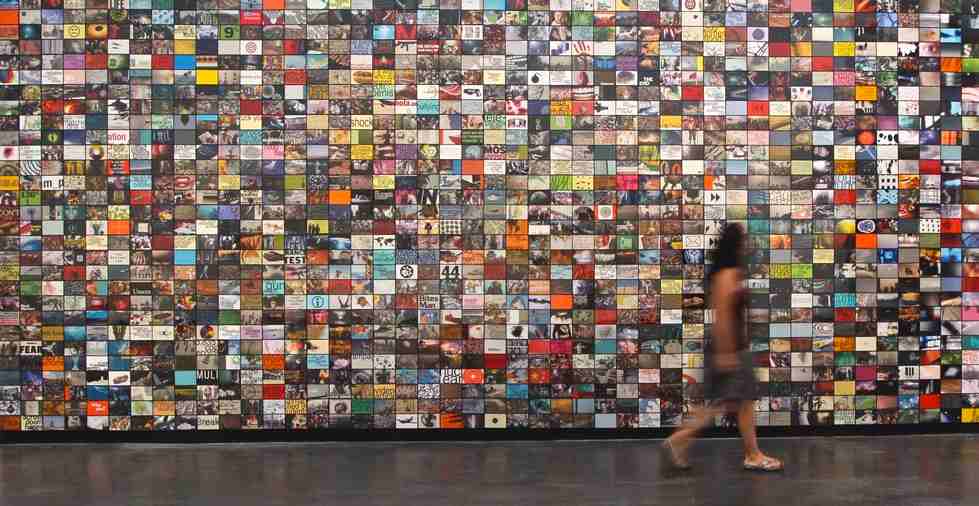 Comfortably Numb is an ongoing archive consisting of clippings from magazines and other printed matter created by Nayda Collazo-Llorens. Over 2,000 framed images comprise this amalgam of sampled visual information functioning as detritus and fragments of data. The work explores our perceptual engagement with the incessant media overload that we seem to seek and endure. 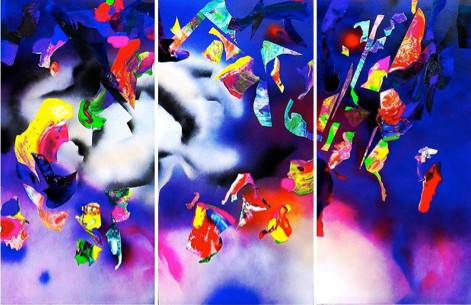 For over 40 years, Herbert Murrie had a successful advertising and design career based in Chicago. As a result of his artistic upbringing and personal drive, he often returned to the studio in pursuit of a more spontaneous and freeing output. In 1988, Murrie began painting seriously and by the late 1990’s he was exhibiting regularly. Over the next 10 to 15 years evidence of his freed state leapt off the canvas. Controlled manipulation of paint and color bore witness to his understanding of design, while his process of working intuitively noted elements of the artistic movements he grew up with in the mid-20th century.

Reese Rehkopf has been blessed with a wealth of diverse experiences thanks to music. Over the course of four years at GVSU, Reese performed in the New Music Ensemble, countless jazz combos, and every available large instrumental ensemble. Although he only took composition lessons his senior year, composing quickly became one of his favorite areas of study. Since graduating GVSU, Reese has delved further into composition; branching out into recording and music production. Reese released his first EP, Cutting Teeth, in November.

Tim Lester is in his fourth year at GVSU. He is the youngest participant in the alumni composition competition. Lester divides his time between two passions: horn and composing/arranging. Usually composing under the pseudonym R. Lewis Lester, his music often showcases a love for the ironic and a whimsical penchant for the bizarre and satirical. His unpredictable style can be easily seen in works such as “I Dream In Memes”, and “Four Unrelated Movements for Sax Quartet”.

Reese Rehkopf has been blessed with a wealth of diverse experiences thanks to music. Over the course of four years at GVSU, Reese performed in the New Music Ensemble, countless jazz combos, and every available large instrumental ensemble. Although he only took composition lessons his senior year, composing quickly became one of his favorite areas of study. Since graduating GVSU, Reese has delved further into composition; branching out into recording and music production. Reese released his first EP, Cutting Teeth, in November. 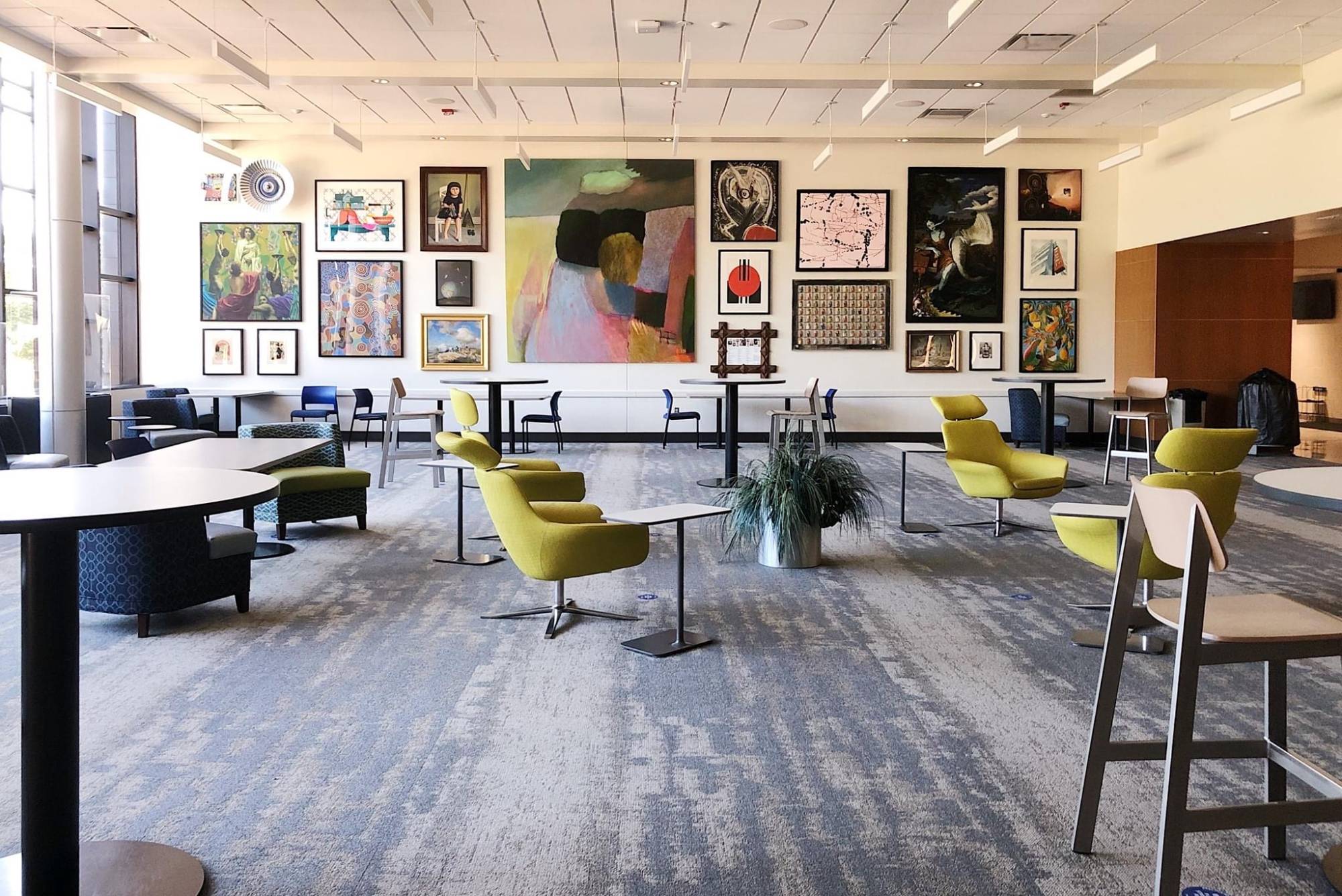 This collection of artwork is on permanent display outside the Louis Armstrong Theater in the Thomas J. and Marcia J. Haas Center for Performing Arts. It includes prints, paintings, sculptures, and drawings by national, international, and local artists engaging a range of themes from the highly personal or surreal to traditional landscape and portraiture. For this 10th anniversary event alumni composers were invited to submit compositions alongside current students. The two groups were judged separately.

To view a recording of the entire performance visit https://youtu.be/rOGnwncAoK0.

Page last modified August 12, 2022
Report a problem with this page