“Dawn, dusk, and starlight are magical for me. In the half-light my perceptions go on full alert. I struggle to make sense of partially perceived forms, silhouettes, muted contrasts, distorted spaces, unexpected glimmers. If there is a time of day that prompted the emergence of human imagination, it was certainly not the clarity of high noon but more likely the dimly comprehended lusciousness of half-light tangled in shadows. For me the unexplained is always most compelling. I’m inspired by the mystery of who we are, how we acquire information through our senses and then what we do with it. The world is never quite what we think it is but somehow we manage. We look at flat, unmoving images and construct spaces and narratives. How does that happen? I am fascinated by sequence and pattern, the structures that make meaning possible; I am curious about where meaning comes from, and suspicious of what we ignore in our desperate need to comprehend the significance of objects and experiences.” - Jim Cogswell

In 1990, Cogswell joined the School of Art & Design faculty, where his teaching has focused on painting and drawing. During the 1992-93 academic year, he was the Charles P. Brauer Faculty Fellow at the University of Michigan Institute for the Humanities. Throughout his career at U-M, he has received numerous grants from the Office of the Vice-President for Research and the Horace P. Rackham School of Graduate Studies. Drawn to interdisciplinary projects, Cogswell has collaborated in performance works and installations with dancers, composers, scientists, and poets as well as other visual artists.  Cogswell has had a number of solo exhibitions in the states, has lectured at colleges and universities around the country, and has been invited to speak on his work at conferences in Japan, Ireland, Hungary, France, and Israel.  Cogswell’s work can be found in the public collections of Yasuda Life Company of New York, Mbank of Houston, Barnett Banks of Florida, the Museum of Albuquerque, the City of Tallahassee, the Tamarind Institute, Valencia Community College of Orlando, Florida State University, and the University of Michigan. 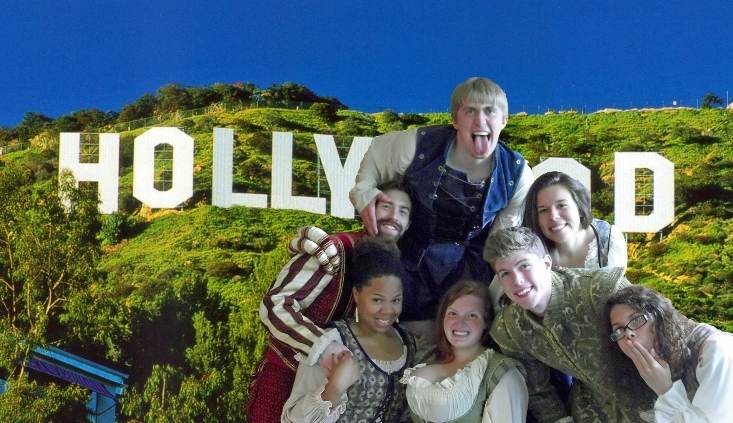 Bard to Go: Lights, Camera, Action! follows William Shakespeare on an adventure to modern-day Hollywood.  Arriving at a 21st-century movie studio, Shakespeare seeks advice from a film producer, her assistant, and some Hollywood actors about adapting his plays for modern movie audiences.  Will Shakespeare’s plays now include Vampires, Star Wars fights, and Reality TV bits? Featuring scenes from The Tempest, The Taming of the Shrew, Macbeth, Romeo and Juliet, The Merry Wives of Windsor, and A Midsummer Night’s Dream, this production gives audiences a lively, fun-loving look at Shakespeare from a modern perspective.

Bard to Go: Lights, Camera, Action!  will perform during the first weekend of Grand Rapids ArtPrize 2014, at select times on Saturday, September 27 and Sunday, September 28.  These performances will take place in front of the Eberhard Center on GVSU's Pew Campus in Grand Rapids.

What is BARD-TO-GO?:  The Grand Valley Shakespeare Festival’s BARD-TO-GO is a 50-minute collage Shakespearean scenes based on a universal themes such as love, magic, and friendship. The company is comprised of six GVSU student actors and a student stage manager who tour West Michigan secondary schools in the late Fall of each year.  BARD-TO-GO is a feature of the annual Grand Valley Shakespeare Festival, and in its 14 year history has given over 13,000 students throughout Michigan an opportunity to experience Shakespeare’s plays.

Impact: There can be no doubt that knowledge of the works of William Shakespeare is important in any education. The incomparable writing skills with which Shakespeare created his touching portrayals of human truth have not been rivaled or replicated since his death nearly four hundred years ago. Everyone, regardless of age, context, or background, deserves to experience the relevance of Shakespeare and the classics in their lives. BARD-TO-GO explores and celebrates Shakespeare and his culture by taking Shakespeare to audiences in schools, thereby giving young people who might not have a chance to experience its brilliance the opportunity to enjoy this work. Certainly, learning extends to the world beyond the classroom walls. In this case, we truly travel beyond classroom walls! By traveling in Michigan and abroad, GVSU students develop important communication and artistic competencies that can be of interest to future employers.   We believe that performing in secondary schools helps young audiences from all backgrounds to engage in an exchange of ideas with Shakespeare and American young actors.

Click here for more information about Bard To Go.


Page last modified November 1, 2018
Report a problem with this page