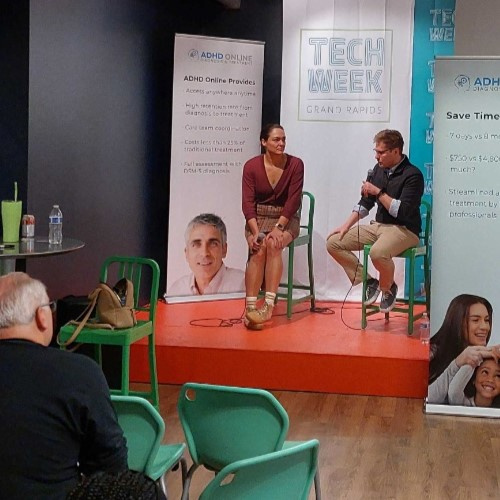 On September 23, ArtPrize capped off its first annual Tech Week with a showcase featuring various local companies and organizations. For our part at Grand Valley State University (and more specifically, the Applied Computing Institute), we brought along our YouBrush app to demonstrate and chat about.

For those not “in the know”, YouBrush is an iPhone app that was designed and built by the ACI for the express purpose of bettering the oral care habits of its users. What separates YouBrush from the competition is the use of a machine learning algorithm to intelligently detect when a user is actually brushing their teeth. This functions as an accountability mechanism; whereas other programs will simply run down a timer while trusting that you’re brushing, YouBrush explicitly requires that you brush in order to increment the proverbial timer. This led to many fascinating conversations around accountability and encouragement mechanisms at the Tech Showcase, often with the particular context of how such mechanisms impact different people.

One of the more fascinating discussions was captured in an interview with Lindsay Guentzel of the Refocused podcast, and focuses on how such designs can have a greater impact on individuals with ADHD, and how technology can push the adoption of better, healthier habits in a given population. Keep your eyes and ears open for more soon!


Page last modified October 31, 2022
Report a problem with this page