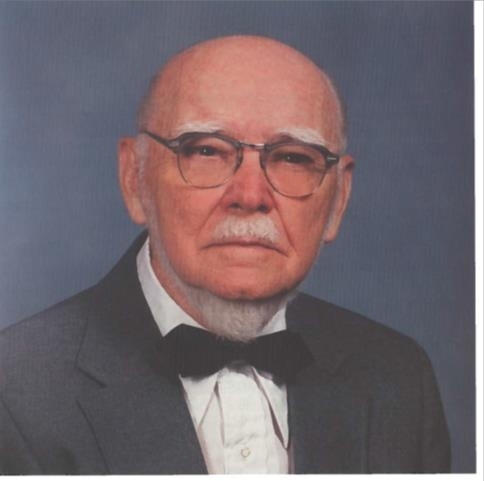 Robert (Bob) Annis was honored posthumously at GVSU’s Annual Enrichment Dinner with the university’s highest award.  An Indianapolis native, Bob claimed that “everything I’ve done is just making a hobby pay”. That modest statement refers to his professional success in creating the R.B. Annis Company, which he led for more than 72 years and is still successful today. Teaching himself, Bob became a national expert in magnetics and precision balancing instruments, providing advice to the U.S. military and major corporations who brought him their most difficult challenges.

Early in his life, Bob joined the Scientech Club with a number of prominent Indiana scientists including Eli Lilly, Elwood Haines, and Frank Wade. He later served as board member and president, leading the club to develop a foundation and to participate in the Central Indiana Regional Science Fair, fostering scientific education for thousands of 4th through 12th-grade students. He also served on the Indianapolis Board of Education, received the Indianapolis Scientific and Engineering Foundation Community Service Award, and was named a ‘Sagamore of the Wabash’, the highest honor Indiana confers.

It was his friendship with fellow Scientech Club member and mentor D.J. Angus, and frequent travels to Michigan for boating on the Great Lakes with D.J., which ultimately connected Bob with Grand Valley State University. D.J. decided, shortly before his death, to give his boat the Angus to Grand Valley for a floating Lake Michigan classroom. Later, Bob and the Angus-Scientech Foundation provided funding for its upkeep and supported the purchase of the D.J. Angus, successor to the original Angus, and the W.J. Jackson which was later added to the fleet.

Bob’s personal encouragement and gifts were instrumental in the establishment and development of the university’s water resources institute, GVSU’s first applied research organization. In 1997, the institute was named the Robert B. Annis Water Resources Institute (AWRI) in his honor. The R.B. Annis Educational Foundation was established in 1997 and continues to support the institute including generous support for the Robert B. Annis Field Station in 2013. In recognition and appreciation of these efforts, the university awarded Bob Annis an honorary Doctor of Science degree on October 22, 1993.

Bob’s lifetime of generosity and scientific discovery have given him a far-reaching legacy. Grand Valley and West Michigan are fortunate to be a part of that enduring effect.

To view a video of this event, please follow this link:    https://www.youtube.com/watch?v=L1u_SNdznKA

Deborah Dila, graduate student who worked with Bopi Biddanda, successfully completed her master’s thesis defense on July 8.  The title of her presentation was: From land to lake: Contrasting microbial processes across a Great Lakes gradient of organic carbon and inorganic nutrient inventories.

Anthony Weinke, graduate student working with Bopi Biddanda, successfully completed his master’s thesis defense on July 20.  The title of his presentation was:  Green and choking: Exploring the dynamics of seasonal productivity and hypoxia in a Great Lakes area of concern and habitat blueprint estuary using time-series measurements.

Scott Kendall and Katie Ringler (graduate student) gave a presentation to visiting high school students from Shiga, Japan on July 25.  The title of their presentation was: Introduction to Muskegon Lake Observatory and time-series environmental data analysis.

Janet Vail facilitated a MEECS Air Quality Workshop at Hope College on July 11.  This was part of an energy workshop arranged by WMEAC.

There were no new awards and recognition for this issue.  Check again next month!

There were no new grants and contracts for this issue.  Check again next month!

“Help restore the Macatawa watershed”
WOODTV.com, July 5, 2016
On July 9 there was a Macatawa Water Festival held at Windmill Island.  AWRI had a booth there, manned by science instructors Paula Capizzi and Michele Smith.

July 6
Students from the City of Muskegon’s summer CATCH camp program in the McLaughlin neighborhood visited the Annis Educational Foundation Classroom for hands-on activities and took a vessel cruise on the W.G. Jackson.

July 29
Middle school students from the Michigan Women’s Foundation University of Life program visited the Annis Educational Foundation Classroom for hands-on activities and enjoyed a tour of the AWRI.


Page last modified February 26, 2020
Report a problem with this page