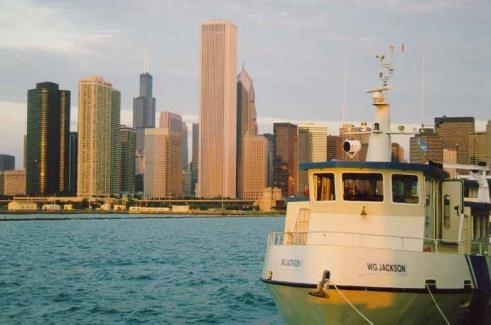 Our current EPA grant is through the Great Lakes Restoration Initiative and we have two partners - the Inland Seas Education Association and Michigan Sea Grant’s Great Lakes Education Program. Dr. Janet Vail serves as co-chair of EPA’s Lake Michigan Forum. The Forum is a stakeholder group for EPA’s Lakewide Action and Management Plan that has members from four states.  In 1999, Dr. Vail asked GVSU to help fund the first State of Lake Michigan Conference, which was held in Muskegon.  The conference was a success and AWRI went on to hold two more conferences in 2001 and 2003. Now hosted by other entities and alternating between the four Lake Michigan states, the State of Lake Michigan Conference continues to be held every other year. AWRI scientists and students will likely be presenting at the upcoming SOLM conference in October, to be held in Traverse City.

Travis Ellens, graduate student working with Carl Ruetz, and Andrya Whitten, research assistant in the Ruetz lab, attended a workshop on the identification of non-game fish species at Michigan State University on March 11.  The workshop was sponsored by the Michigan Chapter of the American Fisheries Society.

Rick Rediske and Janet Vail coordinated a Science Olympiad “Green Generation” event for middle school and high school students on March 28.  Rick, Janet and Ann Hesselsweet, science instructor on the research vessel W.G. Jackson, were judges for the event.  Bopi Biddanda was there as a volunteer.

Carl Ruetz attended career day at South Elementary in Coopersville on February 27, where he discussed being a professor and ichthyologist.

Al Steinman chaired the meeting of the Environmental Committee of the Community Foundation for Muskegon County on March 17.  Al was reappointed Chair for another 3-yr term. They are reviewing proposals for funding.

Al Steinman has been invited to serve a second term on the Management Council of the Cooperative Institute of Limnology and Ecosystem Research (CILER), extending until 2017.

Al Steinman has been invited to be an Associate Editor of Freshwater Biology.  With the journal now being published by Wiley, the former Editorial Board has been disbanded. A new Editor and Associate Editors have been assigned.

Janet Vail and Mark Luttenton attended the annual “Grants on the Grand” event sponsored by the GVSU Office of Sponsored Programs on March 19.

James Smit, former graduate student of Al Steinman’s, is lead author of an article accepted for publication in Wetlands.  Al is a co-author:
Smit, J.T.* and A.D. Steinman. In Press. Wetland sediment phosphorus flux in response to proposed hydrologic reconnection and warming. Wetlands.

There were no new Awards and Recognition this month.  Check again next month!

There were no new Grants and Contracts this month.  Check again next month!

“Lake Michigan water level up 14” over last year”
WZZM-TV 13, March 31, 2015
Captain Tony Fiore was interviewed regarding the affect higher lake levels have on Lake Michigan and other local lakes.

March 21
AWRI held its first “Graduate Student Recruitment” event at the LMC, which also included a tour of our main campus in Allendale.

March 24
The United Way of the Lakeshore held its Board of Directors Strategic Direction Setting meeting at the LMC.

March 26
The Muskegon Lake Watershed Partnership held a public meeting at the LMC.