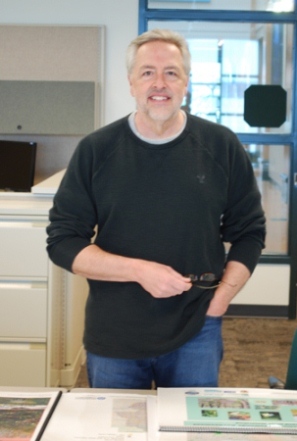 He also was recently named the chair of the Lower Grand River Organization of Watersheds.

Bopi Biddanda chaired a special session Transitions at the waters edge: changing carbon and nutrient cycling in coastal ecosystems at IAGLR on May 30.

John Koches chaired/hosted the Lower Grand River Organization of Watersheds (LGROW) Spring Forum at the Grand Rapids Museum on May 2.

John Koches was invited by Grand Rapids Mayor Heartwell to be a member of the River Corridor Planning Committee.

Rick Rediske attended a Green Infrastructure Conference in Lansing on May 8  9.

Carl Ruetz, Kevin Strychar, Ryan Thum, and Anthony Weinke staffed a table for AWRI and the Muskegon Lake Observatory at the GVSU Alumni Lakeshore Event held in Muskegon on May 14.

Al Steinman was invited to be a member of the steering committee for the Lake Erie lake-scale planning project, being led by the University of Michigan.

Al Steinman was invited to be a member of the executive committee for NOAAs Habitat Blueprint process for Muskegon Lake.

Janet Vail provided the welcoming remarks at the annual West Michigan Clean Air Coalition luncheon in Grand Rapids on May 2; she is chair of that group.

Janet Vail represented AWRI at the Groundswell Student Showcase held on May 14 in Grand Rapids.

AWRI was represented at the annual International Association for Great Lakes Research (IAGLR) Conference held at McMaster University in Hamilton, Ontario from May 26  30. In attendance was Bopi Biddanda. AWRI presentations are listed below:
Biddanda B. A., A. D. Weinke**, and S. Kendall. Oral. Systematically variable carbon metabolism in a Great Lakes coastal zone.
Gronewald, A. and A.D. Steinman. Oral. Common drivers behind long-term water level variability and ecosystem function along Earths longest freshwater coast.

Scott Kendall presented on the topic of Biology, Limnology and Environmental Science, at Grandville Middle School's Career Day on May 1.

Al Steinman presented about Michigan's Blue Economy at an LGROW meeting in Grand Rapids on May 2.

Al Steinman presented on AWRI at a meeting of the GVSU Business & Finance in Allendale on May 6.

Maggie Weinert presented at a career fair/job shadow day at Muskegon Middle School on May 2.

There were no Awards or Recognition items this month.

There were no new grants or contracts this month.

Former GVU Foundation director and longtime AWRI supporter dies
GVNext, May 5, 2014 This article is about the passing of Victoria Verplank, who was a supporter of GVSU and AWRI.