One of the joys of summer at AWRI is our student intern program. This summer, we welcome 13 student interns to the Institute. These students are funded by a variety of sources and work with different principal investigators. 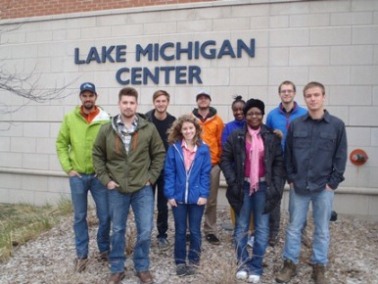 April 10
The Muskegon Lake Watershed Partnership held a public meeting at the LMC.

April 16
The Allendale Lifelong Learners group were given a tour of the LMC and Field Station.

April 28 & 29
AWRI hosted the first in a series of Lake Michigan-Muskegon Lake Connectivity workshops at the LMC. AWRI-GVSU is working in partnership with NOAA - Great Lakes Environmental Research Laboratory (GLERL) on this initiative.

April 30
Harbor Hospice of Muskegon held a meeting at the LMC.

Ann Hesselsweet and Michelle Smith, science instructors on the W.G. Jackson, staffed an AWRI booth at the Muskegon Earth Fair on April 26.

Janet Vail gave a program at the LMC for the Allendale Lifelong Learners on April 16.

Janet Vail trained eight teachers from the Muskegon Montessori Academy for Environmental Change in Project WET and Project Learning Tree at the LMC on April 17.

Al Steinman gave an invited presentation at Wayne State University on April 10 as part of their [email protected] seminar series.

Al Steinman gave a presentation on Climate Change at the Spring Lake Library on April 15.

Al Steinman is a co-author on two manuscripts that are in press:
Nogaro, G. and A.D. Steinman. 2014. Influence of ecosystem engineers on ecosystem processes is mediated by lake sediment properties. Oikos 123: 500-512.

John Koches received the Individual Sustainable Champion Award from the Muskegon Area Sustainability Coalition at a ceremony held on April 23.