The Robert B. Annis Field Station was formally dedicated on August 12th at a ceremony that celebrated the generosity of more than 230 donors, who contributed over 2 million dollars in private funds to make completion of the facility a reality. Speakers included GVSU President Tom Haas, Congressman Bill Huizenga, AWRI Director Al Steinman, and Dan Yates, a Trustee of the R.B. Annis Educational Foundation, which made a major gift to the Field Station Campaign.

The Field Station essentially doubles the research space previously available at the Annis Water Resources Institute, allowing them to expand their efforts to preserve and enhance the freshwater resources of the region, nation, and globe. The station includes three new research labs, a mesocosm tank facility that can now operate year-round, expanded storage areas, 4 new faculty research offices and a dedicated graduate student space. In addition, the station was designed with energy efficiency and sustainability in mind.

Major research initiatives already taking place in the new building include Ryan Thums work on hybridization of invasive and native aquatic macrophytes to assess herbicide sensitivity; Kevin Strychars studies on pathogen susceptibility of Diporeia, a small shrimp-like organism that is a key food source for fish, but whose numbers have declined dramatically with the onset of zebra and quagga mussels in the Great Lakes, and sediment phosphorus release as part of wetland restoration efforts by researchers in Al Steinmans lab.

The faculty, staff, and students at AWRI express their sincere gratitude to all the donors who made the Field Station a reality, with special thanks to the Community Foundation for Muskegon County, whose lead gift through an anonymous donor catalyzed this project, and to the Campaigns Honorary Chair, Chuck Johnson II, and its two Co-Chairs, Larry Hines and Mike Olthoff. 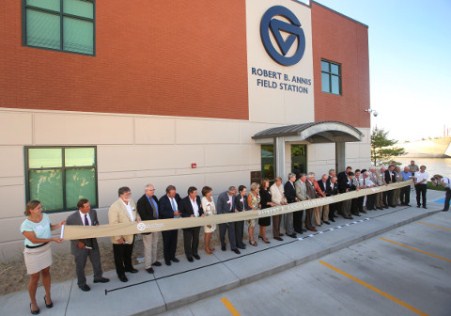 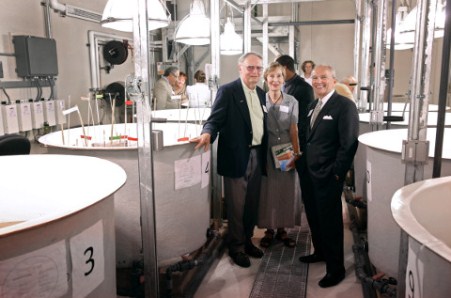 Aug 1
A Geology class from Western Michigan University was given a tour of the Lake Michigan Center and took a vessel cruise on the W.G. Jackson.

Aug 5
The Adventure Camp group from the Muskegon Yacht Club visited the Annis Educational Foundation Classroom for hands-on activities and was given a tour of the Lake Michigan Center.

Aug 6
GVSUs College of Education brought a group of students from the West Michigan Hispanic Center Summer Camp for a program at the Lake Michigan Center and a vessel cruise on the W.G. Jackson.

Aug 7 & 8
AWRI hosted the monthly meeting of the MDNRs Natural Resources Commission here at the LMC on August 7th and 8th. The group had a cruise on the research vessel W.G. Jackson the evening of the 7th and public meetings at the LMC on the 8th.

Aug 16
The Michigan Water Environment Association (MWEA) Lab Practices Group was given a tour of the Lake Michigan Center. The group took a cruise on the W.G. Jackson after the tour.

Aug 21
The GVSU Women in Science and Engineering (WISE) group was given a tour of the Lake Michigan Center and enjoyed a vessel cruise on the W.G. Jackson.

Bopi Biddanda served on a panel of the IL-IN/WI Sea Grant via webinar on August 26.

Carl Ruetz attended the workshop offered by the MSU Extension titled Fishes of the Grand River: pros and cons of dam removal on August 24.

Al Steinman was selected to serve on a technical advisory panel for the US Army Corps of Engineers to review the Comprehensive Efficacy Study investigating the electric barrier in the Chicago Sanitary and Shipping Canal.

Janet Vail has been asked to join the Education Committee for the Muskegon Environmental Research and Education Society (MERES).

Janet Vail and the crew of the W.G. Jackson were in Holland on August 23 and 24 for public cruises.

AWRI was represented at the annual meeting of the Ecological Society of America in Minneapolis, Minnesota from August 4-9. Dave Janetski, Carl Ruetz, and Ryan Thum attended the conference; Dave and Ryan gave presentations:

Thum, R. and E. LaRue. Oral. Hybridization and the evolution of invasiveness in herbicide-managed lakes.

Jared Homola, who recently completed his MS under the direction of Carl Ruetz, was the lead author of a paper that has received the Stevan Phelps Memorial Award from the Genetics Section of the American Fisheries Society as the best genetics paper for 2013. Following is the citation for that award-winning paper:

Geraldine Nogaro has a publication accepted to Freshwater Biology:

Nogaro, G., T. Datry, F. Mermillod-Blondin, A. Foulquie, and B. Montuelle. In Press. Influence of hyporheic zone characteristics on the structure and activity of microbial assemblages. Freshwater Biology.

AWRI awarded grant to study bacteria in Silver Lake
Holland Sentinel, August 26, 2013 The AWRI was awarded a grant to assess the presence of blue-green algae in Silver Lake.