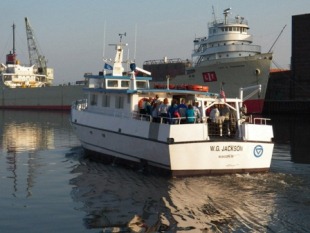 W.G. Jackson with a group in Muskegon.

All aboard for another busy season on the research vessels D.J. Angus and W.G. Jackson.

Since 1986, over 144,000 students and adults have participated in programs onboard the D.J. Angus and W.G. Jackson research and education vessels. The hands-on vessel experience continues to be popular for school groups. Another two-year Great Lakes Restoration Initiative grant from the U.S. Environmental Protection Agency will fund summer cruises and teacher workshops at various ports of call in 2013 and 2014. 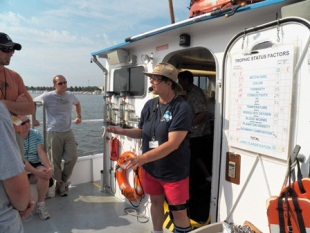 Paula Capizzi with teachers on the D.J. Angus

From 1996 through 2012, the total number of people served by the W.G. Jackson is over 65,000 and there have been 2,710 events. The W. G. Jackson hosted 142 events in 2012, which included the annual Making Lake Michigan Great tour for the U.S. Environmental Protection Agency. The tour is funded through the Great Lakes Restoration Initiative. In the 2012 season, 3,229 people participated in W. G. Jackson activities. 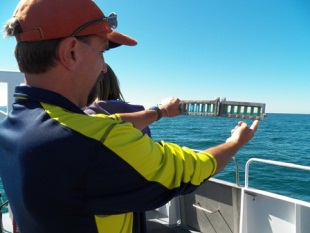 Looking at water color in Holland

The 2013 vessel season, which began on April 22nd, has some new faces onboard. Ann Hesselsweet and Karen Shineldecker have joined the staff of part-time science instructors. Captain John Bontrager has taken the helm of the W.G. Jackson. Gerry Weinert is the new deckhand on the D.J. Angus.

Some of the schools that use the W. G. Jackson, which is docked next to the Lake Michigan Center (home of the Annis Water Resources Institute), also use our Annis Education Foundation Classroom. While ½ of the class is on the boat, the other ½ are in the classroom doing hands-on science activities that complement the vessel trip. 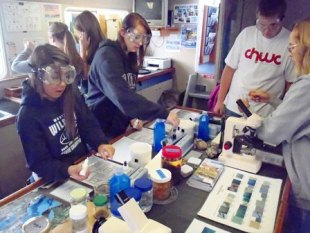 Water testing on the W.G. Jackson

The classes switch places in the afternoon. This better accommodates bus transportation for the schools. Classroom instruction will be provided by Dr. Janet Vail, who coordinates outreach and education at AWRI; Tara Eilers, a former D. J. Angus-Scientech Intern; and Steve Ossim, a 2013 R.B. Annis summer intern.

April 10
AWRI staff hosted a meeting with members from the EPA and MDEQ, to wrap-up the Ruddiman Creek Project.

A Red Cross CPR training class was held for all AWRI vessel crew that work on the D.J. Angus and W.G. Jackson in the Hilt Foundation A/V Classroom.

April 22
A meeting was held at AWRI with Michigan Senator Goeff Hansen and others who are exploring a device to assist with the ongoing port/harbor dredging problem. The group is potentially interested in a pilot project partnership.

Al Steinman was interviewed by Phil Dawson of TV 13 about recent rains and their effect on Great Lakes water levels on April 12th.

Al Steinman was interviewed by MLive about the Grand River plume associated with stormwater runoff.

Janet Vail, Cheri Gerhart, Amanda Syers, and Maggie Weinert conducted a water festival for 3rd grade students in Ealy Elementary in Whitehall on April 24th. The festival was supported by a grant from the Alcoa Foundation.

Janet Vail manned a booth for AWRI at the Earth Fair held at MAREC on April 27th.

AWRI was represented at the Graduate Showcase held by the Office of Graduate Studies in Allendale on April 16.
Bryan Giordano*. Poster. Effectiveness of utilizing volunteers for a large scale telemetry study on Brown Trout in the Au Sable River, MI. Mark Luttenton is his advisor.
Brandon Harris*. Poster. Population status of Lake Sturgeon in the Muskegon River, MI. Carl Ruetz is his advisor.

Rick Rediske was a guest lecturer for Professor Houser, GPY 312, Environmental Planning on April 1st. His lecture was titled My Experiences as a Planning Commissioner.

Rick Rediske gave a presentation titled "The Status of the Lower Grand River: It's a matter of flow" to the Spring Lake Garden Club on April 8th.

Kevin Strychar was a guest lecturer for a Big History presentation on the Allendale campus on April 2nd. The title was Humans and Climate Change.

Kevin Strychar gave a presentation titled Climate change and sea level rise: why it isn't a myth perpetuated by bad science at the Spring Lake District Library on April 22nd.

Janet Vail gave a presentation about AWRI to the Grand Rapids Power Squadron on April 11th.

The following AWRI graduate research assistants each received a Presidential Research Grant of $1,000 from GVSU's Office of Graduate Studies:

Pollutant transfer by migrating salmon
Business Update, April 2013. Rick Rediske was interviewed regarding a grant from Great Lakes Fishery Trust. AWRI's Analytical Lab will be working with researchers from the University of Notre Dame on this project.

MEECS Climate change workshop offered in June
InterChange Newsletter (a publication of the GVSU Regional Math & Science Center), April 2013. The article is about a workshop to be held at AWRI. Janet Vail is one of the instructors for this course.

AWRI teams with Notre Dame on research
FORUM: a newsletter for the Grand Valley State University community, April 14, 2013. Rick Rediske was interviewed regarding a grant from Great Lakes Fishery Trust. AWRI's Analytical Lab will be working with researchers from the University of Notre Dame on this project.


Page last modified March 5, 2020
Report a problem with this page