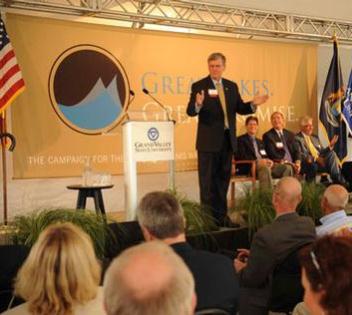 The campaign for AWRI's new Robert B. Annis Water Resources Institute Field Station was officially kicked-off with an event held at the Lake Michigan Center, home of the Annis Water Resources Institute (AWRI) on September 6. Community members, volunteers, donors, alumni and elected officials were among those that gathered to preview the new building. 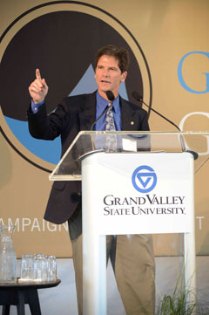 "I'm pleased to be here in Muskegon tonight, and glad that were here to help support world-class research on the Great Lakes," Haas said. "The work were doing right here on Muskegon Lake and in Lake Michigan has a direct impact on the fresh water we value so much."

Steinman stressed the importance of research taking place at AWRI, including ecological, biological, and environmental issues. "Whether its protecting the waters for the benefit of the fisheries, or finding ways to fight against invasive species, we have a resource here on the Great Lakes that we are working to protect," Steinman said.

Campaign co-chair Larry Hines cited the features of the new facility as the next stage for the Annis Water Resources Institute.

Over the past two decades, I personally have been very pleased with the level of commitment from Grand Valley to this community, and I want to say thank you to them for being a partner to, and with, Muskegon, said campaign co-chair Mike Olthoff.

The new facility will be a 14,700 square foot field station that will house dedicated research laboratories, four research scientists offices, space for graduate and undergraduate student research, and spaces for year-round research something that was never possible in the old, unheated field station.

The former field station building on the AWRI site has been taken down and recycled, following Grand Valleys commitment to sustainability.

Sept 14
Series Seminar: Dr. Bradley Cardinale, with the Department of Ecology and Evolutionary Biology at the University of Michigan, presented: "Biodiversity and the functioning of ecosystems".

Sept 26
The Muskegon Area Chamber of Commerce held their Muskegon in Focus meeting in the Multipurpose Room and took a vessel cruise on the W.G. Jackson.

Bopi Biddanda was interviewed on September 24 for a video being produced by the GVSU Office of Graduate Studies, which will serve as a booster for recruitment of international graduate students.

Jim McNair represented AWRI at the annual Intercultural Student Reception event organized by the Office of Multicultural Affairs on the Allendale campus on September 13.

Carl Ruetz attended the 2012 U.S. Areas of Concern Program Annual Meeting titled Setting Priorities in the AOC Program on September 13 in Cleveland, Ohio. He was part of a panel discussion on Approaches to Assess and Remove Fish & Wildlife Habitat and Population BUIs. He talked about his experience working with the White Lake AOC to remove their fish BUIs.

Carl Ruetz participated in a panel discussion sponsored by Michigan Public Radio on September 18 from 6:00 p.m. to 7:30 p.m. at Kirby House in Grand Haven. Event details can be viewed at https://www.michiganradio.org/post/asian-carp-great-lakes. This is part of NPRs Issues & Ale forum. This forum will focus on Asian carp in the Great Lakes and is hosted by Rebecca Williams from the Michigan Radios Environment Report.

Michele Smith and Shirley McIntire represented AWRI with a display and activities at the Grand Haven Salmon Festival on September 22.

Al Steinman spoke on the Blue Water Economy at a Muskegon in Focus meeting held at the Maritime Museum on September 19.

Al Steinman gave a presentation at the White Lake Library kicking off a new project titled Exploring and Documenting the Community Impact of White Lakes Environmental History on September 23.

Al Steinman presented information about AWRI to the Michigan Museum Association at The Lake House restaurant on September 28.

Ryan Thum gave a presentation about Herbicides and hybrid watermilfoils at the Michigan chapter of the North American Lake Management Society at the Kettunen Center in Tustin on September 21.

Al Steinman has been appointed chair of the Environmental Committee of the Community Foundation for Muskegon County.

Bopi Biddanda will serve as chair of the GVSU Radiation Safety Committee from academic years 2012 - 2015.

GVSU building being recycled as construction of university Muskegon Lake expansion to begin
Muskegon Chronicle, September 6, 2012 Great Lakes Dock and Materials is taking down the old field station and plan to reconstruct it in the Lakeside District.

Building on the move at Annis Water Resources Institute in Muskegon
Muskegon Chronicle, September 10, 2012 A photo of the hoist being removed from the AWRI property and an article about the old field station de-construction.

Will Muskegon generosity extend to $7.5 million art museum fundraiser?
MLive.com, September 10, 2012 Fundraising in Muskegon area is discussed, including the fundraising for the new field station.

Preview of AWRI research station draws support
Forum: a newsletter for the Grand Valley State University Community, September 17, 2012 The article is about the kick-off event for the new field station.

Lakes Mall girls clothing store recognized as Muskegon County's most breastfeeding friendly business
MLive.com, September 17, 2012 AWRI was among the businesses nominated for this award, because of our nursing nest, a small room dedicated to breastfeeding mothers.

Environmental History Project kickoff is Sept. 23
White Lake Beacon, September 19, 2012 Al Steinman will be speaking about the areas water resources and the local and regional importance of discovering and telling White Lakes story.

White Lake library to unveil website to collect environmental history memories Sunday
MLive.com, September 18, 2012 Al Steinman will be speaking about the areas water resources and why their story should be told.

Water-quality tour showcases Macatawa - Lake Michigan link
The Holland Sentinel, September 19, 2012 Janet Vail is interviewed about water quality during the vessel trips offered on the W.G. Jackson when it was in Holland on September 14 and 15.

GVSU receives $25,000 grant to restore historic photos
MLive.com, September 20, 2012 Photos from the 1920s and 1930s, taken by D.J. Angus were donated to the GVSU library. The R.B. Annis Foundation gave a grant to preserve these photos. AWRI's research vessel D.J. Angus was named for this man, who donated the original Angus vessel to the University.


Page last modified March 10, 2020
Report a problem with this page