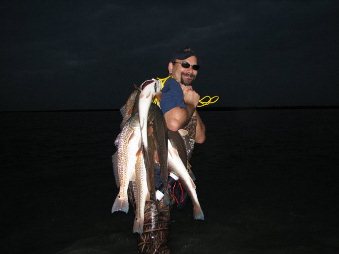 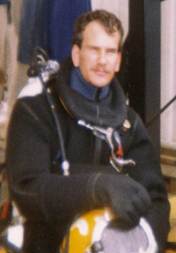 Dr. Kevin Strychar, our new climatologist, was hired and began employment at AWRI August 6th. Kevin was born in northern Alberta (Canada) where his family still farms and ranches in the wild west, much like people did decades ago (1st pic on left). Longing for excitement and a better understanding of water resources, Kevin began commercial diving (2nd pic on right), working in quicksand, zero visibility, and North Sea environments to depths of 600+ feet. Recognizing the delicate balance of human and environment, Kevin gave up diving to earn a BS and MS degree in marine biology at the University of New Brunswick (Canada), followed by a PhD via a commonwealth fellowship to work on the effects of climate change on coral reefs in Australia. Prior to finishing his PhD, he was successful at writing a grant to the EPA to fund his 1st postdoc at the University of Connecticut, studying the effects of climate and pollution on microalgae in Long Island Sound. Shortly after beginning his 1st postdoc, Kevin was awarded a Sir Isaak Walton Killam Memorial Scholarship for a 2nd postdoc studying deep-water coral genetics at Dalhousie University (Halifax, Canada); Kevin worked both postdocs at the same time. After completion of his postdocs, Kevin began an academic appointment at Texas A&M University Corpus Christi studying the effects of climate change on coral reef organisms. When not studying the effects of climate change on freshwater and marine ecosystems, Kevin is an active fisher (3rd pic on bottom), a PADI diving Instructor, and a farmer.

Great Lakes Restoration Initiative cruises and open houses were held on the W.G. Jackson in Milwaukee on August 3.
There were two GLRI trips on the D.J. Angus on August 10 and three trips on August 11. AWRI partnered with the Ottawa County Parks Greenway's Celebration for these trips.

Bopi Biddanda's lab has deployed a surface current drifter that is being tracked by satellite. It was deployed by the research vessel W. G. Jackson in Lake Michigan on July 30, 2012. It can be tracked in real-time using the link: https://www.gvsu.edu/wri/biddanda/lake-michigan-drifter-study-39.htm

Bopi Biddanda hosted MSU participants involved in the MSU-GVSU's Water Initiative Research Grant as they participated in a sampling cruise on Muskegon Lake in the vicinity of the Muskegon Lake Observatory on August 30.

Leon Gereaux, graduate student working with Bopi Biddanda, attended a workshop on time-series observatory data analyses at the Center for Limnology, University of Wisconsin, from August 20-24.

Jim McNair and Rick Rediske met with Mercy Health Partners and Public Heath Muskegon at AWRI on August 9 to develop a tentative design for a grant proposal dealing with environmental occurrence and effects of pharmaceuticals in the Muskegon area.

Al Steinman attended a meeting of the CMU Biological Field Station Science Advisory Board on Beaver Island on August 1214.

Al Steinman was invited to attend a meeting with representatives from GVSU and the University of Michigan to discuss possible collaborations between the two institutions on August 14.

Al Steinman was invited to attend a meeting of the Michigan Economic Development Corporations North American Natural Resources Initiative in Lansing on August 22.

Al Steinman attended a Board of Trustees meeting for the Michigan Chapter of The Nature Conservancy in Lansing on August 29.

Al Steinman, accompanied by John Austin of the Brookings Institution, had meetings with the Frey Foundation and Fred and Christina Keller on August 31st to discuss a Blue Economy for Michigan initiative.

Janet Vail helped teach four days of workshops for Groundswell Great Lakes Stewardship Initiative teachers from August 13-16. A highlight was water monitoring at various sites in the Grand River watershed and a trip on the D.J. Angus.

Janet Vail was co-facilitator for the summer Lake Michigan Forum meeting in Traverse City on August 22 and 23. Forum members had the opportunity to be on the Inlands Seas tall ship. The Inland Seas Education Association is part of our GLRI grant for onboard education.

Janet Vail attended a special climate change meeting for a variety of climate education stakeholders in Lansing on August 27. This meeting was convened by the Michigan Department of Environmental Quality to review the Michigan Environmental Education Curriculum Support Climate Change lessons.

Dave Janetski presented to the Fish Passage Symposium in Traverse City on August 29. The title of his presentation was Adult salmon impacts on stream resident fishes: interspecific interactions and pollutant transport".

Rick Rediske gave a presentation to the White Lake Public Advisory Council on August 21st. The title of his presentation was Status of the restrictions on fish consumption BUI.

Janet Vail and Amanda Syers facilitated a Project WET workshop for West Michigan Great Lakes Stewardship Initiative teachers on July 30. The teachers were on the D.J. Angus on August 2 and Amanda assisted with the workshop throughout the week.

Nicole Horne, graduate student working with Bopi Biddanda, was appointed a Cook Leadership Fellow for 2012-13, to serve at the Hauenstein Center for Presidential Studies, GVSU.

Jessica Comben and Brandon Harris, graduate students working with Carl Ruetz, each received the American Institute of Fishery Research Biologists Clark Hubbs Research Assistance Award for excellence in graduate-level research. Each award was in the amount of $500, which helped support their travel to the annual meeting of the American Fisheries Society in St. Paul, Minnesota.

Amanda Syers, technical call-in working with Janet Vail, has completed all of the requirements for her Master's degree.

Profile in excellence Wampler, Molla, and Rediske, Culture and Science in Haiti
Grand Valley State University Quadrennial report of the College of Liberal Arts and Sciences 2008 2012 (academic year) Rick Rediske and two other colleagues from GVSU traveled to Haiti in the summer of 2012 to better understand the interactions between cultural perceptions regarding water treatment interventions.

Annis Water Resources Institute to be highlighted on Discovery Channel
GVNext, August 3, 2012 The article gives a brief overview of the segment about AWRI that is scheduled to air on August 15.

GVSU's water institute to be featured on Discovery Channel
Holland Sentinel, August 3, 2012 The article gives a brief overview of the segment about AWRI that is scheduled to air on August 15.

Annis Water Resources Institute to be highlighted on Discovery Channel
WaterWorld, August 4, 2012 The article gives a brief overview of the segment about AWRI that is scheduled to air on August 15.

Discovery Channel to feature GVSU's Annis Water Resources Institute
MLive, August 5, 2012 The article gives a brief overview of the segment about AWRI that is scheduled to air on August 15.

New grants from foundations and corporations for August 9, 2012
The Chronicle of Philanthropy, August 9, 2012 A 1.1 million dollar grant is listed, for use in building the new AWRI Field Station.

White Lake fish as good as other lakes, but you shouldn't eat them every night
MLive, August 21, 2012 Rick Rediske gave a presentation about research done at AWRI related to toxins in fish as related to the proposed delisting of White Lake.

Editorial: it will take more than getting off the toxic hotspot list to boost our reputation
MLive, August 22, 2012 The writer mentions Rick Rediskes study of fish in White Lake and Pentwater Lake.

Diagnostic work starts at Silver Lake
Oceana Herald-Journal, August 29, 2012 AWRI is a partner with USGS on research on Silver Lake. The AWRI portion of the study will begin in 2013.