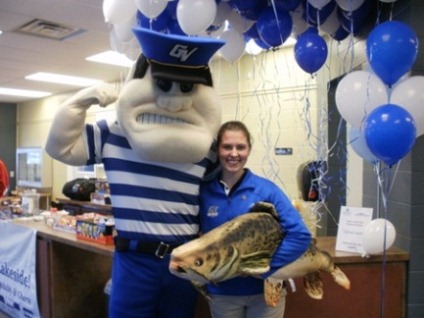 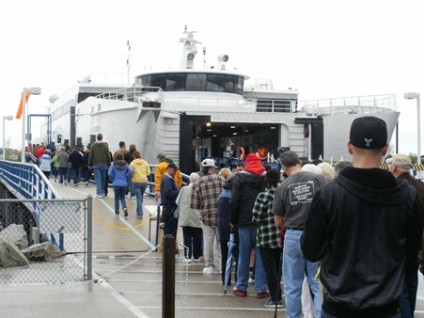 All aboard the Lake Express

Grand Valley State University's Annis Water Resources Institute (AWRI) and the Lake Express (the Muskegon to Milwaukee cross-lake ferry) held an event on Saturday, May 5th, to celebrate one of our most precious resources water!

This family-friendly event included special excursions on the Lake Express, fun activities, and information on how AWRI and the Lake Express promote Muskegon's Blue Water Economy. Optional behind-the-scenes ferry tours and opportunities to meet members of the ships crew were also available. AWRI staff provided various displays, a two-tiered poster on the buoy project, a coloring book area, posters about the new building, and posters describing research at the Institute for viewing. There was a large poster of Lake Michigan in the front lobby. Book marks, magnets, stickers, and information about AWRI were distributed to those interested. AWRI videos were shown on the large screen TV in the display area.

Grand Valley State University's mascot Louie the Laker was on hand along with AWRI staff to interact with guests and greet them as they arrived and departed.

Dr. Mark Luttenton from AWRI provided commentary on the Lake Express and was interviewed by Dave Alexander with the Muskegon Chronicle. The cruise participants indicated that they had a great time and some mentioned that they would like to come again next year.

All proceeds from each trip are being donated to benefit the GVSU's Annis Water Resource Institute and the building of their new Field Station Building. Jill Emery with the Lake Express informed us that our event held on May 5th had over 500 visitors and raised $5124 !

Nate Hoekstra with GVSU News and Information Services ran video, while Jeff Dykehouse was photographer. You can access their article & work at:

May 1
Northpark Elementary 4th, 5th, and 6th graders visited the Annis Educational Foundation Classroom for hands-on activities and took a vessel cruise on the W.G. Jackson.

May 2
DeWitt Elementary 4th graders visited the Annis Educational Foundation Classroom for hands-on activities and took a vessel cruise on the W.G. Jackson.

May 9
A STEAD (Science Teacher Education and Development) Grant Teachers workshop was held by GVSU.

May 16
GVSU's Regional Math and Science Center held a Project PRIME (Promoting Reform in Mathematics Education) workshop (final in a series of five) for Muskegon and Newaygo area teachers.

May 21
A "Women and Investing" seminar was held by a local Raymond James group.

May 29 & 30
Daisybrook Elementary 5th graders visited the Annis Educational Foundation Classroom for hands-on activities and took a vessel cruise on the W.G. Jackson.

May 31
CPR training for GVSU staff and students was held.

Rick Rediske completed his work in Haiti along with other GVSU faculty members from April 30 May 14. They interviewed 60 families, conducted 6 focus groups, and analyzed 100 water samples. The project was funded by a GVSU Center for Scholarly and Creative Excellence Grant titled Interdisciplinary assessment of water resources and water quality interventions in Haiti.
Michael Snider, graduate student, along with Anthony Weinke and Elizabeth Sommers, summer student interns working with Bopi Biddanda, participated in a Lake Huron research cruise from May 29 - June 1.

Al Steinman met with Cam Davis, Senior Advisor to the EPA Administrator on Great Lakes issues, on May 14.

Al Steinman was interviewed on May 15 for a video being produced by Sea Grant to describe sediment remediation from the community perspective.

Al Steinman attended a retreat of the Indiana, Illinois, and Michigan Boards of Trustees for The Nature Conservancy at Indiana Dunes State Park on May 17-18.

Janet Vail, Maggie Weinert, Anna Harris, and Tara Eilers ran stations at the salmon release for Reeths Puffer Schools on May 4 and May 11.

Janet Vail, Paula Capizzi, Tony Fiore, and George Thibault greeted guests who boarded the D.J. Angus at a GVSU Alumni Event at the Holiday Inn in Grand Haven on May 16.

Scott Kendall spoke about being an Aquatic Biologist at a Career Day held at Grandville High School on May 3.

Carl Ruetz was a guest lecturer for NRM 150 on May 7 on the Allendale campus.

Al Steinman presented to the Bill Jackson Long-term Monitoring Endowment Fund at the Community Foundation for Muskegon County on May 30.

Janet Vail presented to the GVSU Woodrow Wilson teachers group at the Pew Campus on May 31st.

Bopi Biddanda was the author of an article published in the Interchange:
Biddanda, B. Lake Sentinel: Observatory for Ecosystem Changes in Muskegon Lake. Interchange (Magazine of the Regional Math and Science Center, GVSU) Vol. 19, No. 4. https://www.gvsu.edu/rmsc/interchange/science-and-math-update-299.htm

Al Steinman is the PI on a new grant to do post-restoration monitoring of aquatic macrophytes and socio-economic value of the Muskegon Lake shoreline. PI. NOAA. 2012. $30,000.

Lake Sentinel: observatory for ecosystem changes in Muskegon Lake
Interchange: science and math update: a publication of the GVSU Regional Math and Science Center, May 2012 Bopi Biddanda authored this article about the Muskegon observation buoy.

Viewpoint: Learn how to unlock Muskegon's blue economy at Saturday event
The Muskegon Chronicle, May 3, 2012 Discussion of the upcoming AWRI/Lake Express event and its connection with the blue economy.

Lake Express excursion
Grand Haven Tribune, May 7, 2012 Several photos and a brief article about the AWRI/Lake Express event held May 5.

Muskegon's love affair with the lakes was on display at Saturdays Lake Express cruises
MLive.com, May 10, 2012 The article is about the AWRI/Lake Express event held May 5, 2012.

2 Oaklandon teachers and 10 students receive grant
Indystar.com, May 18, 2012 Teachers and students from Indiana received grant money to be part of the annual trip to GVSU/AWRI for a visit to the Lake Michigan Center and a trip aboard the research vessel W. G. Jackson.

Rotary Club brings Bangladesh study group to Muskegon for a week of exploration
MLive, May 21, 2012 The Rotary District 6290 (including Muskegon) hosted a group of five people from Bangladesh. They were touring the Muskegon area for a couple of days; the Annis Water Resources Institute was one of their stops.

Fish biology class offered at WSCC
Ludington Daily News, May 23, 2012 One of the events scheduled for the Fisheries course is a trip on the research vessel W. G. Jackson.

Conservancy seeks biz support in fight against invasive species
Crain's Detroit Business, May 28, 2012 Al Steinman is listed as a member of the Board of Trustees for The Nature Conservancy.