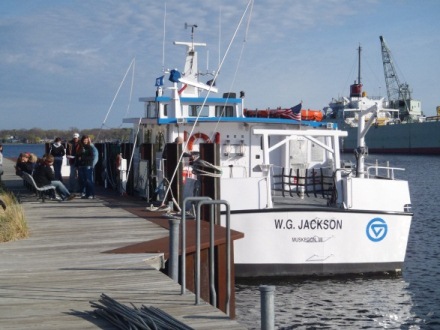 For several weeks now the captains and deckhands have been preparing and maintaining the vessels in preparation for the beginning of a new vessel season.

We hired a new captain to run the vessels, too. His name is Kevin Fitch, and he was most recently a captain for the S.S. Badger.

Last fall AWRI hired David Ruck, a graduate of GVSU and local film maker, to produce a new DVD about our vessel program, Exploring the Lakes. It shows viewers what goes on during the cruise. Each school that uses the vessels is sent a copy of this DVD in order to prepare their class(es) for the experience.

Some of the schools that use the W. G. Jackson, which is docked next to the Lake Michigan Center (home of the Annis Water Resources Institute), also use our Annis Education Foundation Classroom. While ½ of the class is on the boat, the other ½ are in the classroom learning water quality information that complements the vessel trip; then in the afternoon the classes switch places. This instruction is provided by Dr. Janet Vail, AWRI Education & Outreach Coordinator; Amanda Syers, education assistant; and Tara Eilers, a GVSU undergraduate student who is a D. J. Angus-Scientech Intern at AWRI for the spring/summer semester.

Mark Luttenton presented at the annual CLAS Sabbatical Showcase on April 4. His poster was titled Invasive cattails; the threat to Michigan's wetlands.

Al Steinman presented on the state of job opportunities for environmental professionals in academic research, as part of a panel at the 2012 Spring Conference of the West Michigan Chapter of the Air & Waste Management Association at GVSUs Eberhard Center on April 26.

Elizabeth LaRue, graduate student working with Ryan Thum, was nominated for the GVSU Graduate Deans Citation for Academic Excellence in the Major.

Ryan Thum, Bopi Biddanda, and Al Steinman received $100,000 in funding for a joint collaboration with Peggy and Nathaniel Ostrom at MSU titled Building Partnerships in Water Research between Grand Valley State University and Michigan State University: The Molecular genetic basis for invasiveness of milfoils and a time-series lake observatory for investigating metabolism in Muskegon Lake".

AWRI director elected to science board
GV Now, April 3, 2012 Al Steinman was selected to serve on the Society for Freshwater Sciences Board of Directors.

$1/2 million study considered for Silver Lake
Oceana's Herald-Journal, April 19, 2012 GVSU-AWRI and USGS may team up to do a study of Silver Lake water quality.

Letter: Restoring the native fishery can only help Lake Michigan
MLive, April 29,2012 AWRI is mentioned in the photo caption to this article.