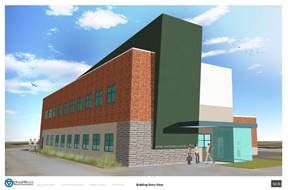 The Grand Valley State University Board of Trustees approved the construction of a new research building that will serve the needs of the university's Annis Water Resources Institute in Muskegon. The new facility will be located on the site of the existing field station building at 740 W. Shoreline Drive, just to the south of the university's Lake Michigan Center.

The $3.4 million project, which represents an investment in the Muskegon downtown waterfront, will meet the immediate and long-term needs of the Institute. Approximately 65% of the funding is already secured through a significant lead gift from an anonymous donor, an existing federal grant, and university capital development funds.

The building will be designed and built to meet stringent LEED certification standards by using materials and systems that will be selected for their durability, sustainability, energy efficiency, and their ability to decrease long-term maintenance and operations costs. Fishbeck, Thompson, Carr, and Huber, Inc. is serving as the project architect. Construction will begin in August 2012 and should be completed by May 2013.

Alan Steinman, director of the Annis Water Resources Institute, said the new research building will allow the Water Resources Institute to expand its fresh water research activities as the current Lake Michigan Center facility is heavily used, especially in summer, when lab space is virtually impossible to find. Steinman said, with the addition of the new facility, We will be able to address the critical issues facing the Great Lakes well into the 21st Century.

Feb 21
A collaborative meeting was held with staff from U.S. Geological Survey (USGS) and AWRI.

Bopi Biddanda participated in the selection of awards while serving on a panel of the Michigan Space Grant Consortium (NASA) on February 7-8, 2012. GVSU obtained ~$50,000 in funding for 9 projects (5 Undergraduate Fellowships, 1 Graduate Fellowship, 1 Seed Grant and 2 Program Grants) for the 2012-13 year.

Al Steinman discussed AWRI and the new field station building at the GVSU Board of Trustees meeting in Allendale on February 10.

Al Steinman attended a Summit on the Great Lakes Region at the White House on February 29.

Al Steinman's lab coordinated a meeting with the USGS's Water Science Center of Lansing on February 21. Attending were 4 scientists from USGS, and Sara Damm, Mary Ogdahl, Rick Rediske, and Al Steinman from AWRI.

AWRI was represented at the Joint Annual Meeting of the Wisconsin and Michigan Chapters of the American Fisheries Society in Marinette, Wisconsin on February 7-9. Graduate students (denoted by one asterisk) and a faculty member presented. AWRI personnel are in bold, with presenter listed first:

AWRI was represented at the Midwestern Aquatic Plant Management Society meeting held in Milwaukee, Wisconsin on February 26 - 29. One of our graduate students (denoted by one asterisk) presented. AWRI personnel are in bold, with the presenter listed first:

LaRue, E.A.*, M.P. Zuellig*, and R.A. Thum. Distribution patterns and response of hybrid and Eurasian watermilfoil to 2, 4-D in the Menominee River Watershed.

Thum, R.A. and E.A. LaRue*. Evidence for reduced sensitivity to 2, 4-D among hybrid watermilfoils in Michigan's Upper and Lower Peninsulas.

Carl Ruetz gave an invited oral presentation about his Muskegon Lake fish monitoring to the Muskegon Lake Watershed Partnership in Muskegon on February 9:

Janet Vail, Amanda Syers, and Karen Meyers (GVSU Regional Math & Science) facilitated a Climate Change workshop at the Regional Math and Science Center on February 3. There were 27 teachers in attendance; the workshop was funded by a grant from the GLOBE program.

Janet Vail and Amanda Syers presented a program at the Lakeshore Museum on February 8 for third grade students from Nims Elementary School.

Janet Vail was a guest speaker for Environmental Studies 201 at the GVSU Allendale campus on February 14. Her topic was the Great Lakes.

Rick Rediske and co-author Xuefeng (Michael) Chu had an article accepted for publication:

Alan Steinman and Mary Ogdahl had an article accepted for publication:

Ryan Thum and Matt Zuellig, his former graduate student, were co-authors on an article accepted for publication:

Western Michigan Regional Green Communities Workshop
GVSU Michigan Alternative and Renewable Energy Center, February 3, 2012 John Koches is mentioned as one of the speakers for this event.

Muskegon's Blue Economy future?
MiBiz, February 6, 2012 AWRI is mentioned in the article as an important piece of the Triple Bottom Line concept.

¼ page ad in the Grand Valley Lanthorn (student run newspaper)
February 6, 2012 Brandon Harris is highlighted in the article, a brief overview of what AWRI does, and a reminder AWRI is currently taking applications for internships/scholarships.

GVSU to upgrade Water Resources Institute facility in Muskegon
MLive, February 10, 2012 GVSU announced that the Board of Trustees approved a new field research building for AWRI.

Grand Valley to buy in downtown Detroit, build in Muskegon
CBS Detroit, February 12, 2012 GVSU announced that the Board of Trustees approved a new field research building for AWRI.

Board approves new AWRI building, housing increase
FORUM, a newsletter for the Grand Valley State University Community, February 20, 2012 GVSU announced that the Board of Trustees approved a new field research building for AWRI.