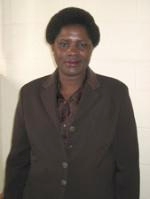 She's a mother to a blended family of 15, grandmother to two and "mama" to the growing number of African refugees who live in the Grand Rapids area.

Dorothy Sewe, 38, and her family have lived in Grand Rapids for three years. Through Catholic Human Development Outreach, most of her family left a refugee camp in Tanzania and relocated to West Michigan. Several were forced to remain behind in Tanzania.

"We were lucky to come here knowing English," Sewe said. "It is a wonderful country. You come here without a single cent and people take care of you as if you were a special guest."

Sewe, who has an international diploma in tourism from Geneva, Switzerland, had worked as a bank teller in Grand Rapids; her husband, who has a doctoral degree in mechanical engineering, works in an area factory. Because she preached the value of an education to her children, Sewe also enrolled in Grand Rapids Community College and -- after earning an associate's degree -- entered Grand Valley in 2004, majoring in International Relations and minoring in Political Science. She has since immersed herself in the campus and community.

Through a GVSU international relations course internship with the American Red Cross, Sewe initiated an international tracing service in which area residents can use the agency to find missing family members. Prior to Sewe's work, the Grand Rapids Red Cross agency sent such cases to Ann Arbor.

"People are so happy after I tell them we've made contact," she said. "It is such a wonderful feeling that brings joy to my heart."

She is also working with Grand Valley political science professor Jacques Mangala to develop a humanitarian law workshop on campus next year with support from the Red Cross.

Many newly relocated refugees know to seek Sewe's help when they come to Grand Rapids. "So many refugees know me as a mama," she said. "Most are at GRCC, and I help them fill out financial aid forms and whatever else they need. I believe education is the only key to a better life."

Sewe was among a group of students and faculty honored as outstanding women during a ceremony in March 2005. She received a scholarship from Positive Black Women, a campus group that created an endowed scholarship fund that gives support to non-traditional women students.