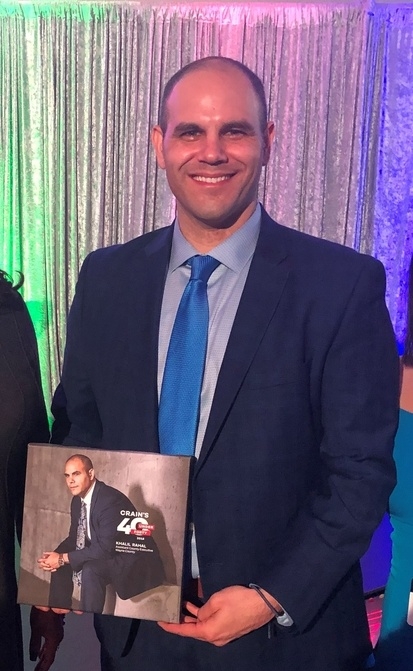 GVSU Political Science alum Khalil Rahal graduated from GVSU in 2006 and University of Detroit Mercy Law School in 2009. After working several years in the Wayne County Prosecutor’s Office, Khalil Rahal began working to promote economic development in Detroit. As the Assistant Wayne County Executive, Rahal has been leading economic development for Michigan’s largest county and the 19th largest county in the country. Rahal has been focused on repurposing underused or vacant county-owned properties and taking on structural issues that affect metro Detroit’s economic competitiveness. Under Rahal’s direction, the county secured a deal to sell the former Standard Accident Insurance Co. building at 640 Temple St. for $11 million to a development group that plans a $65 million makeover for the building. Rahal was the pointman for Wayne County in securing a deal with the Moroun family’s Crowne Enterprises to buy the polluted former McLouth Steel Products Corp. steel plant in Trenton. Crowne and the U.S. Environmental Protection Agency have a deal in place for a Superfund cleanup at the 180-acre steel plant site as well as an adjacent 70-acre property in Riverview. Rahal also helped engineer a deal between Wayne County and Southfield-based Morgan Development to sell the long-abandoned Eloise Hospital Complex in Westland for $1. The agreement stipulated that the developer has to invest $20 million in revitalizing the one-time psychiatric asylum, which Wayne County had owned since the late 1800s.  In 2020, Khalil was also given the responsibly of managing $1.6 Billion dollar budget and successfully achieved unanimous approvals for both the 2020 and 2021 budget. At the age of 37, Rahal was honored with this year’s class of Crain’s 40 Under 40, awarded to those Detroit area Leaders recognized as making a significant difference in their communities. Since, he has been awarded the 2019 Michigan Economic Medalist of the year award and has been recognized as one of Crain's 50 People to Know in Government.