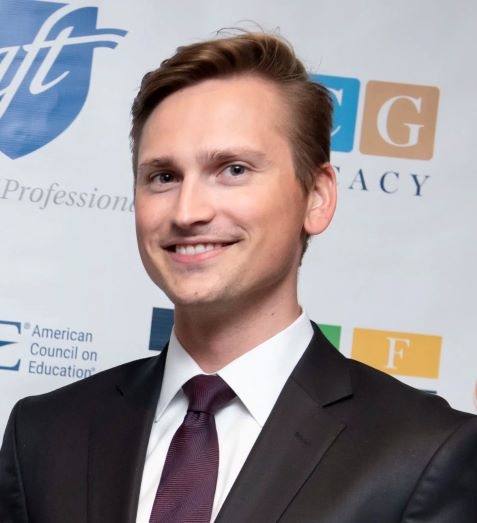 Erik Lazdins grew up in Grand Haven, Michigan, and chose to pursue his interest in politics at GVSU, earning a Bachelor of Science degree in Political Science in 2015. During his senior year, he took advantage of the Political Science Department's partnership with the Washington Center, studying in DC and interning as a media and communications intern at the Organization for Economic Co-operation and Development (OECD). “The knowledge and experience gained at Grand Valley equipped me with the skills I needed to be a successful government relations professional,” Erik said. “If it weren’t for opportunities offered at GVSU, like The Washington Center program, I don’t think I would be where I am today.”

After graduation Erik returned to Washington to work as a federal appropriations lobbyist for the American Speech-Language-Hearing Association (ASHA), a professional, scientific, and credentialing association for audiologists, speech-language pathologists. Erik's primary focus at ASHA is to lobby for increased funding for special education services and supports.

As an American of Latvian descent, Erik has also followed foreign policy issues related to the Baltics. This fall he was elected to the Board of Directors of the Joint Baltic American National Committee (JBANC), supporting the committee’s policy agenda to advocate for continued U.S. engagement with Estonia, Latvia and Lithuania, and strengthen transatlantic economic and security cooperation.


Page last modified December 18, 2019
Report a problem with this page