Intelligence Was My Line- Hauenstein Honored in D.C. 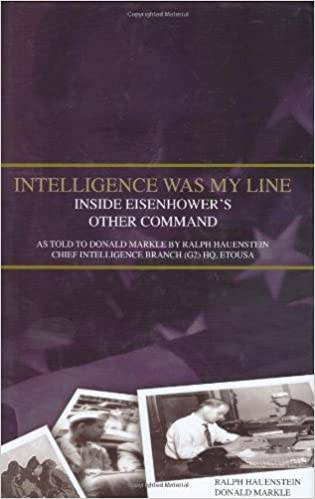 Former Michigan Governor John Engler: “The time was the late 1930s. The storm clouds of war were gathering over Europe….

“I was at my city editor desk at the Grand Rapids Herald when a telegram arrived that changed my life forever.  Opening it, I saw that I was being called to active duty as a first lieutenant in the United States Army….  It meant leaving my family to serve, and … it was my duty to my country.  It might require separation from my young family for an indefinite amount of time, but I did have the solace of knowing that my wife, Grace, was in this with me all the way.”

So begins Intelligence Was My Line.  With those words I cannot think of a more fitting way to introduce the author of the autobiography about a heroic military man, a brilliantly successful entrepreneur, a generous philanthropist, and an inspiring patriot — my friend and fellow Michiganian, Ralph Hauenstein.

I do this at the optimum time in the program.  I recall the words of Harry Truman’s vice president, Alban Barkley, who said only one memorable thing his entire life.  Barkley said: “A good audience is smart, well educated & and a little drunk.”  So you’re in a good frame of mind to hear about a good man.

Ralph and his family and I go way back, to the early 1970s, when his son was having pig roasts on his farm in Howard City on behalf of a young legislator.  That was over three decades ago, and as the years went by and I learned more about the remarkable Hauenstein family, I grew to respect all that they did and all that they represented.

To understand Ralph Hauenstein, you have to start with his family.  He and his wife of 74 years, Grace, have been a blessing to so many people.  As Ralph puts it, the “book is dedicated to my family, whose love and devotion to me far exceeds, to the fullest measure, those services I performed during the war years.”

We have heard outstanding tributes from President Ford, Congressman Ehlers, and Congressman Hoekstra.  In addition, Richard just pointed out a number of ways in which Ralph Hauenstein is exceptional.  Certainly his battles against social barriers like racism are fundamental to understanding his life.

Adding to Richard’s observations, I’d like to point out how much Ralph improved the lives of others in his many business endeavors.  After the war, Ralph saw opportunities to build bridges between the United States and a Europe devastated by war.  He went into international trade and partnered with European enterprises to provide goods and services to consumers in Europe, the Middle East, and elsewhere where democracies were struggling.  A risk-taker, he underwrote a modern bakery in Haiti, providing jobs for hundreds of workers and thousands of individual distributors at a difficult time in that nation’s history.  He also set up a school in Florida that taught people from developing countries how to run a fully-automated bakery and provide good jobs in their local economy.

As a former governor and as the president of the National Association of Manufacturers, I stand in awe of Ralph’s broad vision and achievement.  He was the true “compassionate conservative” before the term became current.  He was living it out of his values and faith.

And that is the Ralph we know — a man who is at once extremely accomplished yet self-effacing & a successful businessman with a philanthropist’s heart & a wise observer of the international scene who always remained rooted in the American Midwest & a patriot to his nation while an inspiring example to his friends.

Ladies and gentlemen, please join me in welcoming Ralph Hauenstein.

Ralph Hauenstein: Thank you, Governor Engler, for that gracious introduction.

Everyone is being so wonderfully complimentary, but at 94 years of age it is easy to keep one’s life in perspective.  I am reminded of the man from Johnstown, Pennsylvania, who passed away in that tragic flood.  When he got to the Pearly Gates, he was greeted by St. Peter, who informed him that he could say a few words of introduction to everyone who’d made it to Heaven.  “Well,” the man said, “I want to tell everyone in Heaven how terrible that Johnstown Flood was.  It was just the most awful thing!”

“I can understand your strong feelings about the flood,” St. Peter said. “But I should alert you: Noah will be in the audience!”

Seriously, my appreciation to all of you for coming here this evening.  It’s really good to see John Engler, whose 12 years as governor of Michigan made our state a better place for people my age to “retire” and stay near family.  I also appreciated the kind remarks of one of nation’s great presidential historians, Richard Norton Smith who, it’s safe to say, has never written a dull sentence or had a dull tour of duty at any of the presidential libraries he’s directed.  Thanks, also, to Glen Howard and the Jamestown Foundation for hosting this event, and also to the Hauenstein Center for Presidential Studies for helping with the logistics.  The reason we’re here is that Don Markle thought of a book to write, and I’d like to acknowledge his hard work turning my stream of consciousness into a coherent narrative.

I was proud to serve under General Eisenhower.  On June 6, 1944, Eisenhower was arguably the most powerful man in the world.  He was the supreme commander of the Allied Expeditionary Force, the hand-picked leader of Operation Overlord, the largest amphibious assault in human history.  The Allies’ mission to retake western Europe from Hitler’s Third Reich depended on the success of Operation Overlord against the fiercest enemy in human history.

During the first few months of 1944 the south of England was transformed into a giant military base. Over three million soldiers, sailors, and airmen were training to play their part in the invasion of Europe.  Headquarters staff officers carefully coordinated and recorded the movement of every unit to ensure that the planned movement and embarkation of the fighting troops and the transfer of their vital supplies would run with clockwork precision.

With an initial assault force of over 170,000 men and 20,000 vehicles it was a logistical nightmare for the planners involved.  Over 1,000 supply vessels and 4,124 landing ships and craft would be used to transport the combat troops and their equipment across the English Channel.  For the protection of the naval convoys, and to help soften up the German coastal defenses by naval bombardment, an additional 1,213 warships would sail with the armada.

In addition to being the largest amphibious assault in human history, Operation Overlord was the defining experience in the lives of millions of men and women.  Certainly it had a huge impact on my life and outlook and, looking back, perhaps the contribution I am most proud of was turning newly arrived officers into professional military intelligence operatives.

It was also eye-opening to work with the British and French.  British intelligence was first rate.  When we got to London, the Brits already had a plan, but the Americans were needed to execute it.  As for the French….

Former President Gerald Ford (Text from letter): I am proud to join you in congratulating my friend, Ralph Hauenstein, on the publication of Intelligence Was My Line: Inside Eisenhower’s Other Command.  Ralph is a true American hero, having served our nation with distinction since the 1930s.

Thank you, again, for joining me this evening.

His role in the Second World War was particularly important to the success of the Allies under General Dwight D. Eisenhower in the European Theater of Operations.  As Chief of the Intelligence Branch, U.S. Army, Colonel Hauenstein was an unheralded hero during Operation Overlord, when the Allies began their assault on Fortress Europe.  He was also among the first American soldiers into liberated Paris, war-torn Germany, and Nazi concentration camps.

Ralph’s experiences in World War II shaped his outlook, as it shaped mine and so many in our generation.  He understood the importance of international cooperation and of the untiring pursuit of peace.  At the same time, he became a successful international businessman, using the same skills that had aided General Eisenhower at SHAEF and ETOUSA.

I am delighted that Ralph Hauenstein and Don Markle have teamed up to tell the untold story of Ralph’s service during the Second World War.  I am impressed by the book’s factual accuracy, humorous stories, and insights into the way the allies worked together to win the war in Europe.

I regret that I cannot be with you in person, back in Washington, D.C., to see Ralph again and to celebrate the publication of this wonderful book.  But Betty and I wish our 94-year-old friend Godspeed, and now are looking forward to the next volume of his eventful life to come out.

Congressman Vernon Ehlers (Text from letter): Please accept my heartiest and most sincere congratulations to you for being recognized by the Jamestown Foundation for your contributions to World War II and post-war intelligence.  This letter provided me with the unique opportunity to share some personal thoughts about why this honor, and the many others you have received, are so very much deserved.

West Michigan has been the home of many generous individuals who have contributed in highly significant ways to the betterment not just of our local community, but of the world.  President Gerald Ford and Senator Arthur Vandenberg are two such individuals.  You are another.  Our world is a better place because of your impressive contributions during and after World War II.  I am old enough to know that defeat of Nazism and the Axis Powers was far from certain.  Your work as Chief of Army Intelligence in the European theater under General Eisenhower was highly and quietly instrumental in the ultimate success of Operation Overlord and the pivotal invasion of Normandy on D-Day.

It is striking, Ralph, that you could play such a significant role in preserving the freedom of the Western World, and yet remain so humble and down to earth.  Rather than resting on your many laurels, you continue even now to generously contribute time and money to your community and your nation.  Your intellect, your dedication to education and research, your financial contributions to so many wonderful causes, your commitment to your family and your church, all stand as testaments to Ralph Hauenstein the man.  I consider it a privilege to have you as a constituent.  I consider it an even greater privilege to have you as a friend.

Mr. Hauenstein rose to the rank of colonel while serving in the U.S. Army during World War II and was appointed Chief of the Intelligence Branch in the Army’s European theater of operations under General Dwight Eisenhower.

Mr. Hauenstein was later selected to serve as a consultant on the President’s Advisory Commission during the Eisenhower Administration.  He served as a member of the team that supervised the first free elections in Russia and served as an auditor for the Second Vatican Council in Rome.

At 94 years old, he continues his career of public service and has significantly impacted West Michigan through his charitable donations and tireless involvement in the community.

His generosity made possible the founding of Grand Valley State University’s Hauenstein Center for Presidential Studies.  The Center encourages students to emulate his career by aspiring to achieve leadership positions and committing to public service.  It fosters discussion by students, government officials and the public about the role of the U.S. presidency in domestic and world affairs.

Mr. Speaker, please let it be known that on this sixth day of April in 2006 that the U.S. House of Representatives acknowledges the vision, contributions and achievements of Mr. Hauenstein as he continues to serve his country and community.


Page last modified November 13, 2020
Report a problem with this page