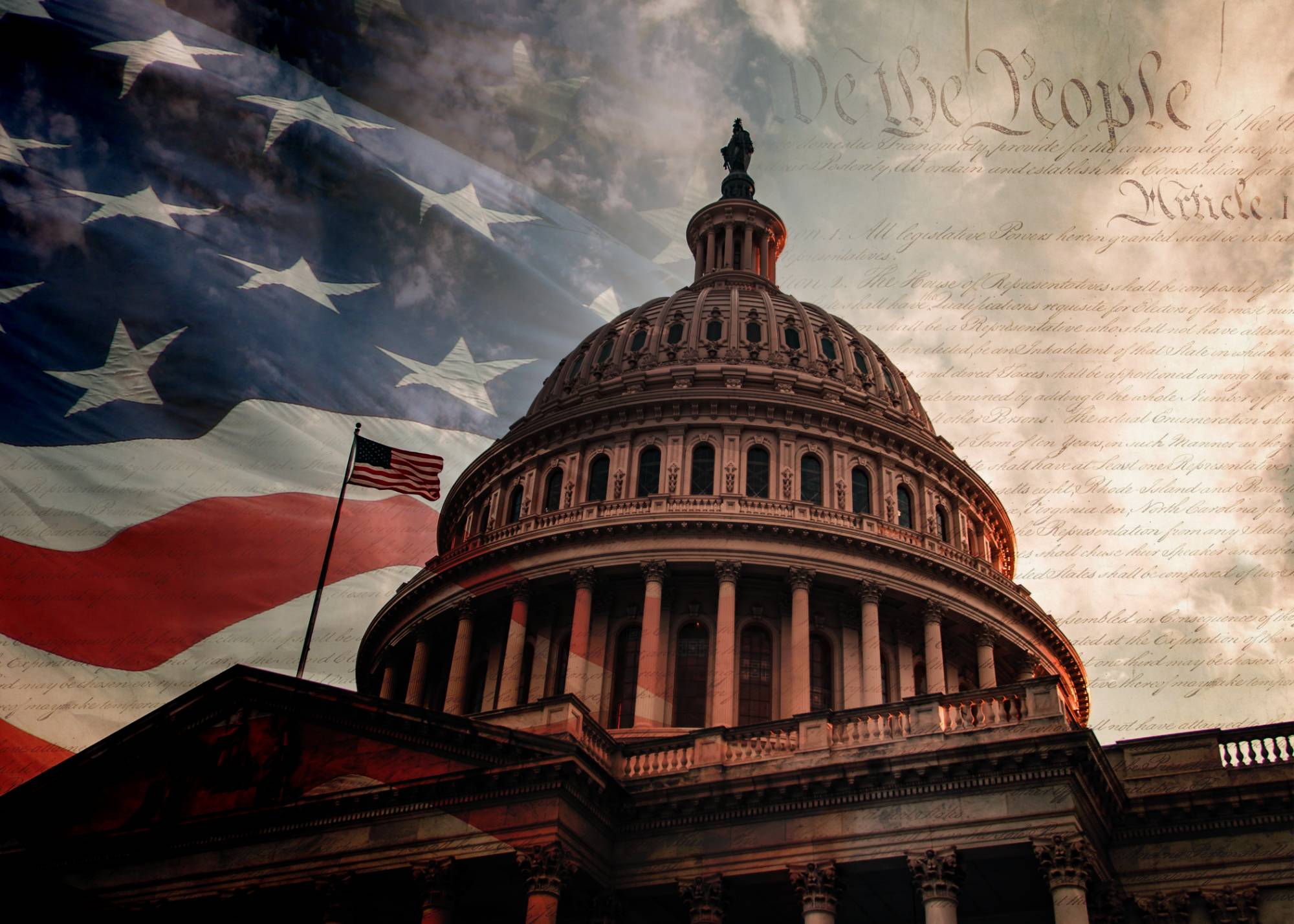 The Constitution, Elections, and Democracy

Join President Philomena Mantella and her esteemed predecessors —Thomas Haas, Mark Murray, and Arend Lubbers — at their roundtable, to pursue your own engagements and strengthen the national conversation to build a stronger America through constructive dialogue and by embracing personal responsibility to each other

“An important question arises: where do we go from here? We must strengthen our commitment to principled leadership, civility, and democracy, no matter the difference in our views and politics. We must work together, as we move forward from chapters already written in history, through today's defining moments into a future of greater promise.”

Announcing a Presidential Roundtable series, called “The Constitution, Elections, and Democracy,” with support from the Hauenstein Center for Presidential Studies, the College of Liberal Arts & Sciences, Brooks College of Interdisciplinary Studies, the Padnos/Sarosik Civil Discourse Program in the Meijer Honors College, the Office of Student Life, and the Gerald R. Ford Presidential Foundation. We will, as members of an academic community, seize this moment to explore the divisions straining our civil discourse. Grand Valley is defined by fair, rigorous and open intellectual exchange offered with respect for the rule of law, democracy, and the inclusion of people of all backgrounds. Profound pain delivers to us the opportunity to strengthen ourselves, our community, and our nation. Careful examination of the Constitution, voting rights and procedures, journalism, social media, and other related subjects will bring focus to this undertaking.

Read the full statement about the Presidential Roundtable series here 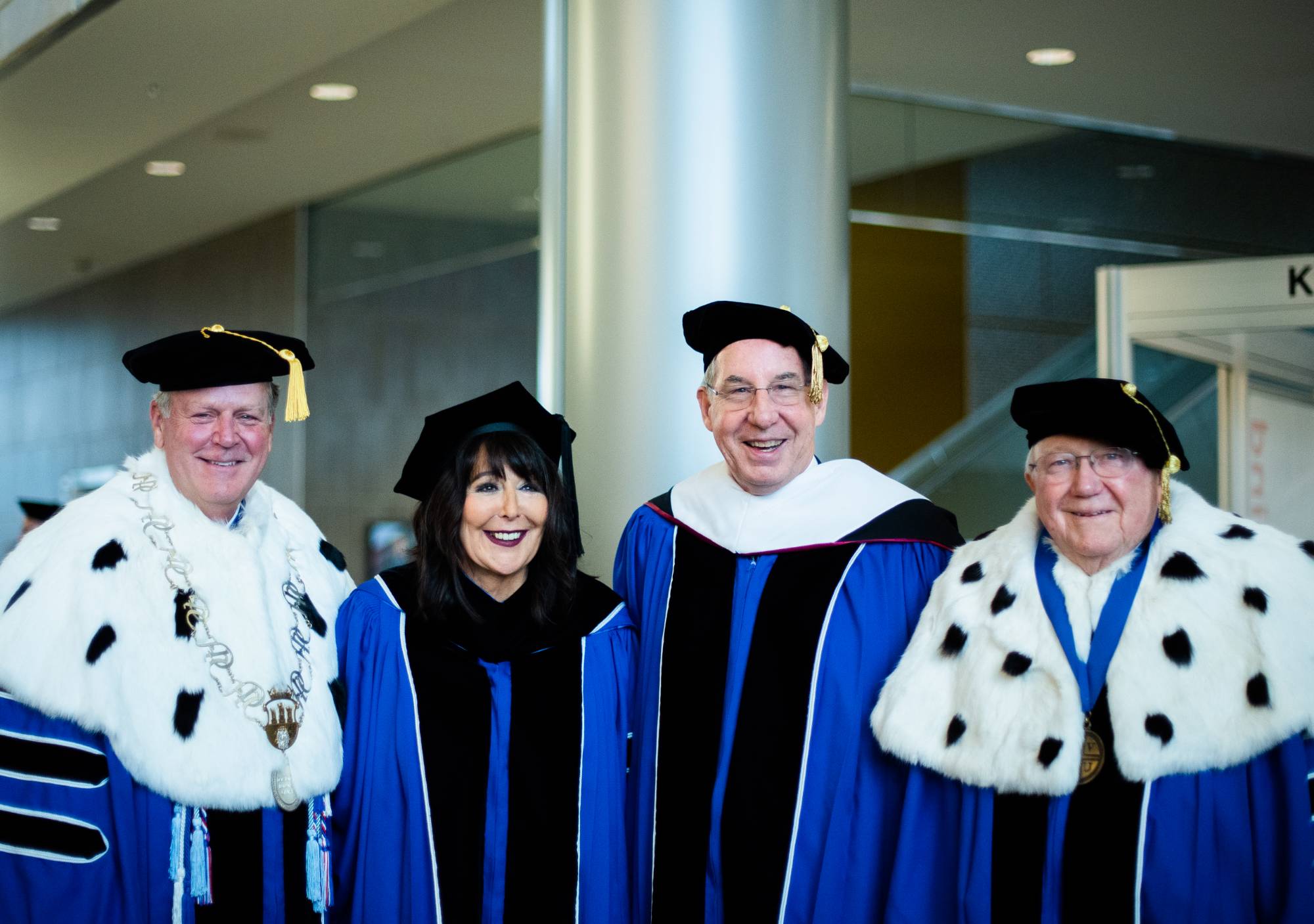 Join the Office of Student life Community Service Learning Center and the Hauenstein Center for Presidential Studies for student-facing dialogue to explore these topics deeper, the Friday following the events at 12 PM. The final dialogue will take place Friday, April 9.

January 6, 2021, saw the first-ever assault on the United States Capitol, the seat and the iconic image of America’s representative democracy. Across the country, citizens continue to wonder how we, as a nation, can begin to heal the pain and wounds created that fateful afternoon. Grand Valley State University’s presidents, past and present, encourage us to explore these challenges together. By examining our most cherished institutions, we can learn from their history and apply lessons for our future. In the first installment of the Presidential Roundtable series Jeffrey Rosen, president and CEO of the National Constitution Center, joins President Mantella and past Presidents Thomas Haas, Mark Murray, and Arend Lubbers for an event that probes our nation’s most revered document, the Constitution, and its impact on the events of January 6 and beyond. 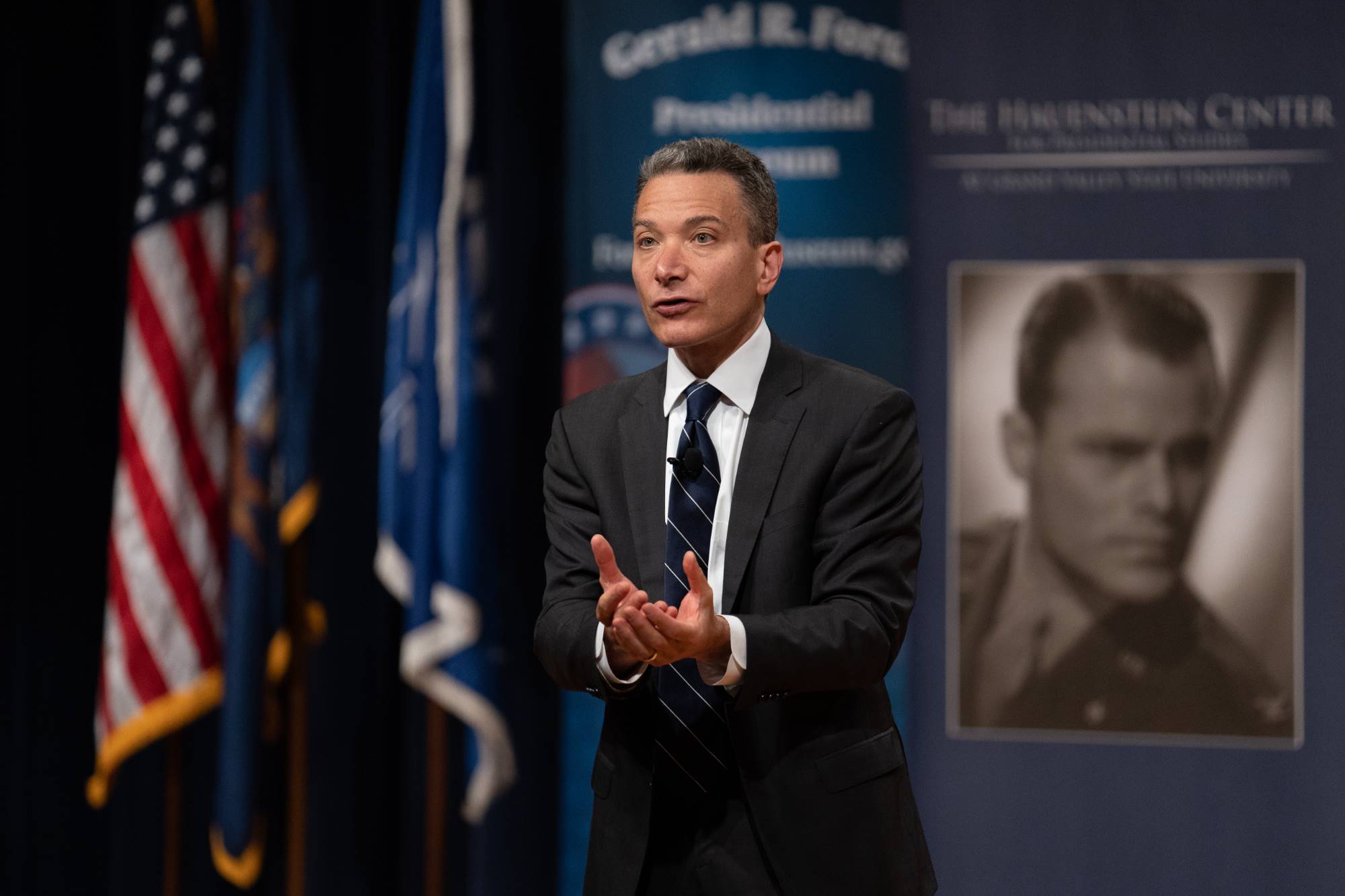 Free and fair elections, transparently reported, are the foundation of a healthy democracy. Yet in the United States, the proliferation of media has shifted our nation’s political, cultural, and social landscape – and not always for the better.  As the nation waited to see the results of two special election races which would determine partisan control of the U.S. Senate, the New York Times’s Astead Herndon – who has reported on Michigan politics – was on the ground covering Georgia as it embraced its newfound status as a battleground state. Days later, reporting from inside the Capitol on January 6, PBS NewsHour’s Lisa Desjardins saw first-hand the consequences of the attack on our nation’s most visible symbol of democracy. In the second installment of the Presidential Roundtable series, journalists Herndon and Desjardins join Grand Valley State University’s President Philomena V. Mantella and her predecessors Arend Lubbers, Mark Murray, and Thomas Haas for a conversation that delves into the role the media play in the election process and how to restore public faith in elections, journalism, and democracy. 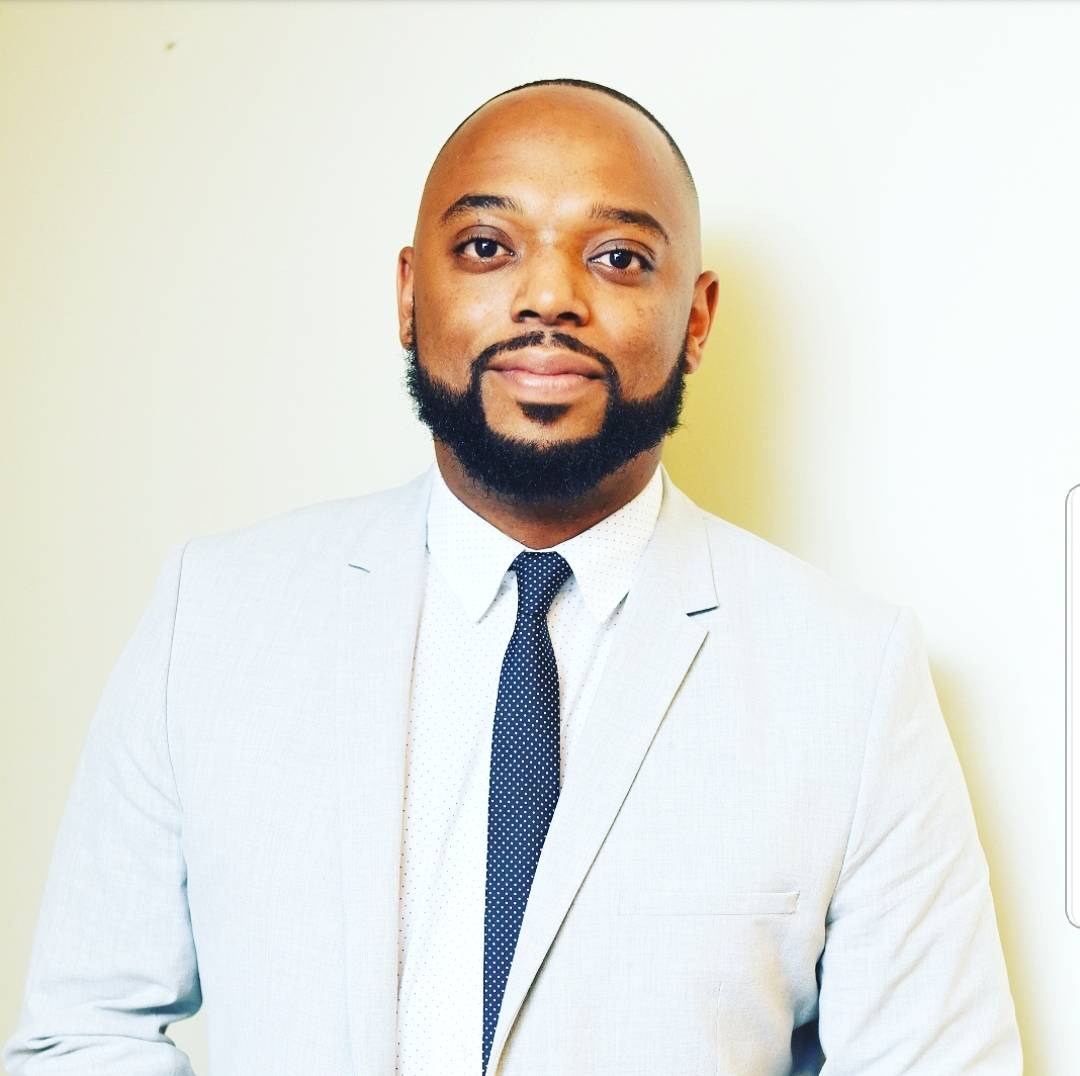 Astead W. Herndon is a national politics reporter at The New York Times and a political analyst for CNN. Before joining The New York Times in 2018, Herndon held several reporter positions at The Boston Globe. Most recently, he was a national politics reporter, covering the Trump White House. He also spent time as a City Hall reporter and a general assignment Metro reporter. Mr, Herndon is from the Chicago suburbs and attended Marquette University in Milwaukee, Wisconsin. He was included on Forbes Magazine's most recent 30 under 30 media list.

Lisa Desjardins is a correspondent for PBS NewsHour, where she covers news from the U.S. Capitol while also traveling across the country to report on how decisions in Washington affect people where they live and work.

She specializes in breaking down complex stories and political disagreements into the key pieces that matter, often translating numbers and fiscal information into accessible stories for the audience.

Prior to joining NewsHour, Desjardins spent nearly ten years with CNN as a senior correspondent and Capitol Hill reporter. Prior to CNN, she reported for the Associated Press, WBTW-TV, WIS-TV, WTS-TV, Reuters, and The Sun News. At WIS in Columbia, South Carolina, she broke news of the compromise to bring down the Confederate flag from the statehouse dome.

Desjardins earned a bachelor’s degree at the College of William and Mary and a master’s degree from Northwestern University’s Medill School of Journalism. She also received a first level graduate degree in Russian Studies from the Herzen State Pedagogical University of Russia.

Desjardins is the recipient of a Peabody Award for CNN’s coverage of the 2008 election and a Society of Professional Journalists’ Sigma Delta Chi award for national breaking news for coverage of the Haiti earthquake. 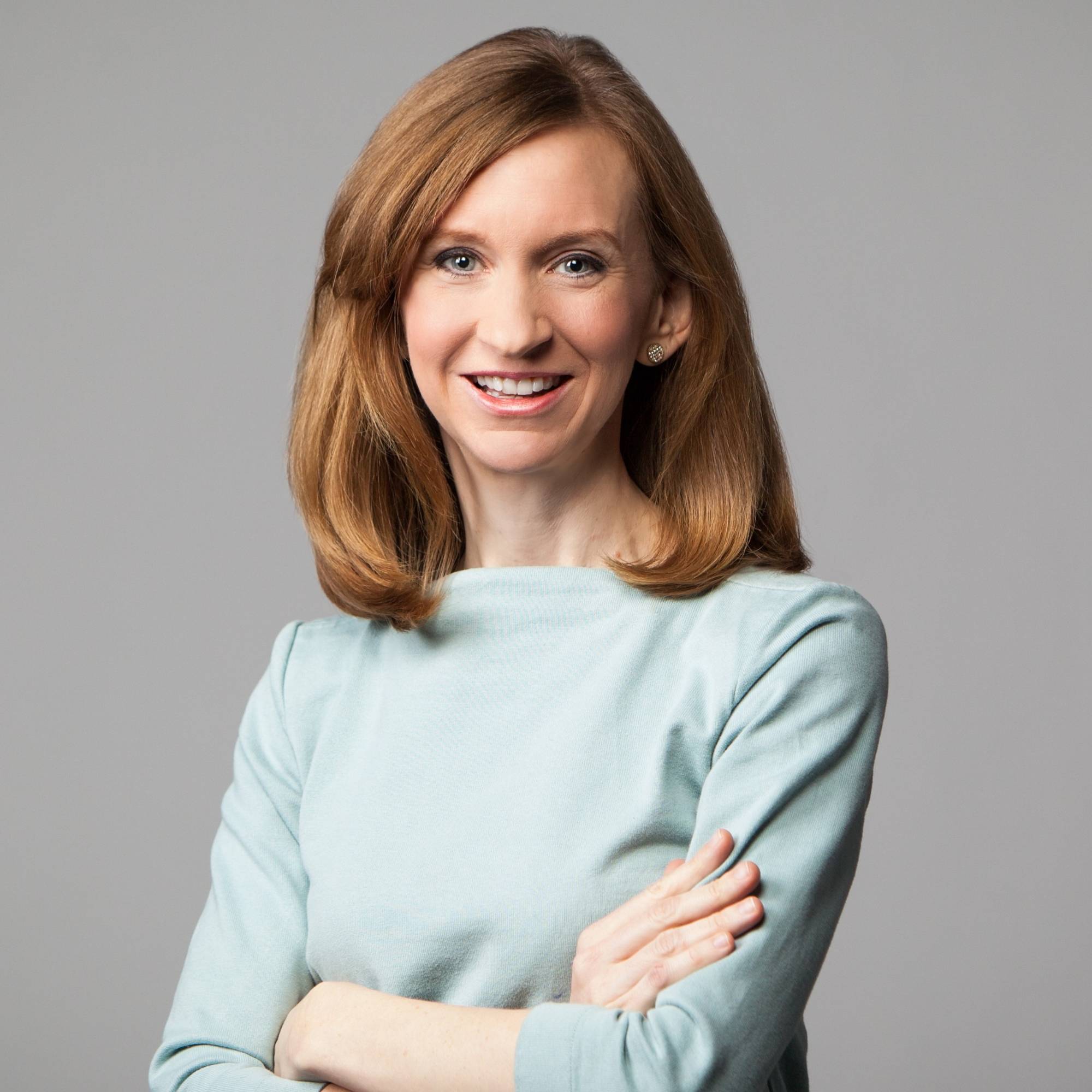 As political polarization and economic inequality deepen, increasingly corrosive public discourse tears at the social fabric of democracy. Across the country, Americans agree: we are living in troublesome times. The challenges we face today appear more daunting than ever before – but we’ve been here before. In their new book, The Upswing: How America Came Together a Century Ago and How We Can Do It Again, Robert Putnam and Shaylyn Romney Garrett combine storytelling and statistical analysis to provide a sweeping overview of more than a century of history. Drawing on lessons from earlier eras, the authors show us the path to a society once again based on community. In the Presidential Roundtable series’ culminating installment, Putnam and Garrett joined President Philomena Mantella and her predecessors Arend Lubbers, Mark Murray, and Thomas Haas for a discussion that navigates how, as a collective society, we can restore faith in our institutions, our democracy, and ourselves.

Robert D. Putnam is the Malkin Research Professor of Public Policy at Harvard University, having retired from active teaching in May 2018. Raised in a small town in Ohio, he was educated at Swarthmore, Oxford, and Yale. He is a member of the National Academy of Sciences, a Fellow of the British Academy, and past president of the American Political Science Association. In 2006 Putnam received the Skytte Prize, the world’s highest accolade for a political scientist, in 2013 President Barack Obama awarded him the National Humanities Medal, the nation’s highest honor for contributions to the humanities, for “deepening our understanding of community in America,” and in 2018 the International Political Science Association awarded him the Karl Deutsch Award for cross-disciplinary research. He has received eighteen honorary degrees from universities in eight countries, including in 2018, Oxford.

Putnam has written fifteen books, translated into twenty languages, including Making Democracy Work: Civic Traditions in Italy and Bowling Alone: The Collapse and Revival of American Community, both among the most cited (and bestselling) social science works in the last half-century. American Grace: How Religion Divides and Unites Us, co-authored with David Campbell, won the Woodrow Wilson award as the best book in political science published in 2011. His 2015 bestseller, Our Kids: The American Dream in Crisis, chronicled the growing class gap among American youth.

Before coming to Harvard in 1979, Putnam taught at the University of Michigan and served on the staff of the US National Security Council. At Harvard, he has served as Dean of the Kennedy School, Associate Dean of the Faculty of Arts and Sciences, and Director of the Weatherhead Center for International Affairs. He co-founded the Saguaro Seminar, bringing together leading thinkers and practitioners (including President Obama) to develop actionable ideas for civic renewal. His counsel has been sought by national and grassroots leaders on both sides of the aisle and both sides of the Atlantic, including Presidents Clinton, Bush, and Obama, Prime Ministers Blair and Cameron, and prime ministers from Ireland and Finland to Singapore and South Korea. Over the last several decades he has also worked directly with thousands of grassroots leaders in scores of local communities coast to coast across America.

He lives in Jaffrey, New Hampshire, and Cambridge, Massachusetts, with his wife Rosemary. 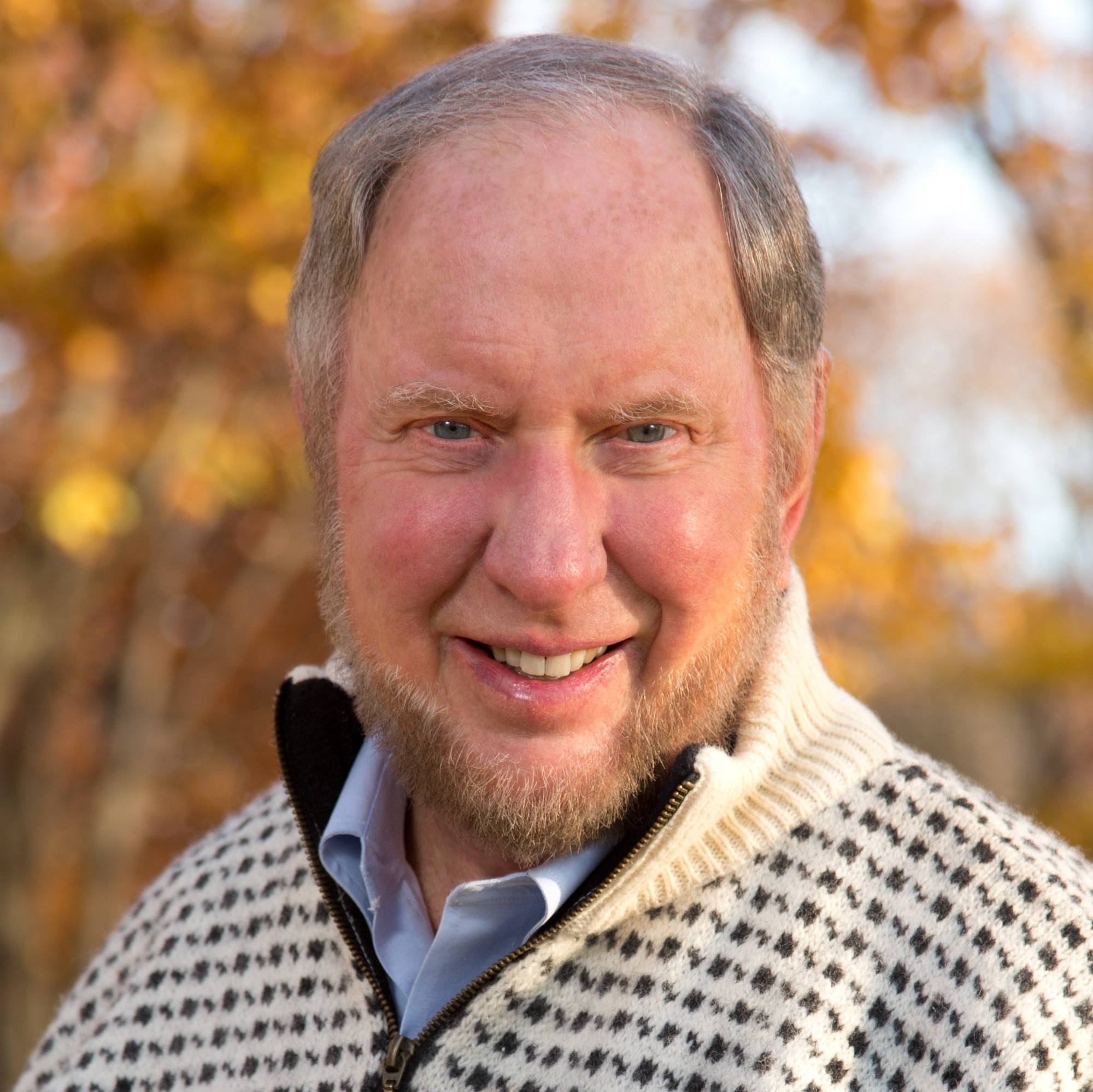 Shaylyn Romney Garrett is a writer who has dedicated her life to the pursuit of connection, community, and healing in an increasingly fragmented world. Her work includes the uniquely revealing portraits of religious communities across the United States in American Grace: How Religion Divides and Unites Us. She is a founding contributor to the Aspen Institute’s initiative, Weave: The Social Fabric Project, and writes about her personal journey back to community on her blog, Project Reconnect.

Shaylyn has also had a successful career as a social entrepreneur. With her husband, James Garrett, she co-founded Think Unlimited, a nonprofit venture working to catalyze social innovation in the Middle East. She lived in the Hashemite Kingdom of Jordan for six years, during which time she partnered with Queen Rania Al-Abdullah to bring an original Arabic language curriculum on creativity and critical thinking to Jordanian public schools. Shaylyn’s work has been featured by the New York Times, FastCompany, LinkedIn, Harvard Business Review, and Arab Investor. In 2011 she was honored with the prestigious Draper Richards Kaplan Social Entrepreneurship Fellowship, and was a finalist in the global Echoing Green Competition. She was twice awarded a membership to the Clinton Global Initiative, and has been a speaker at TEDx. 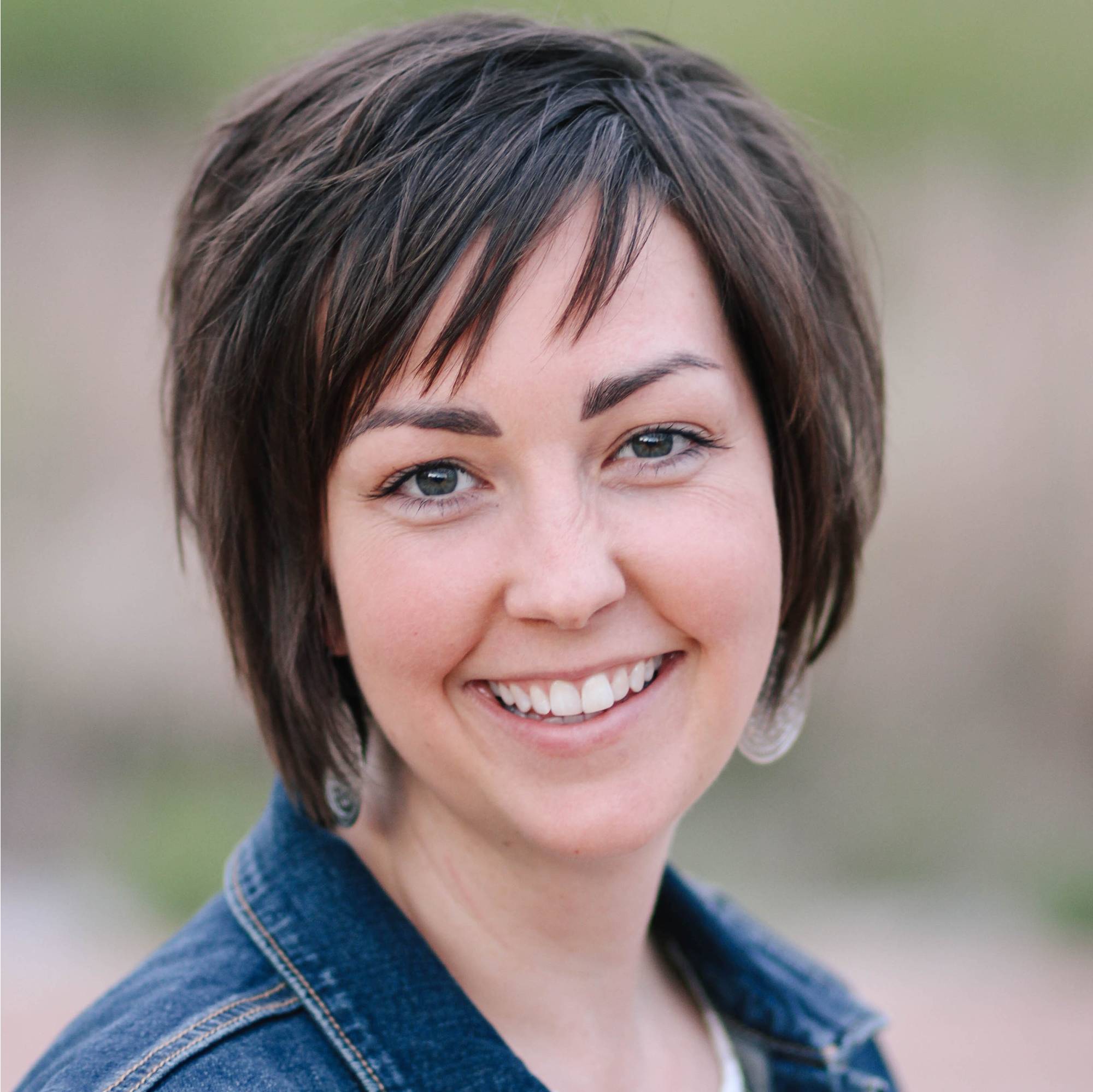 
Page last modified April 7, 2021
Report a problem with this page