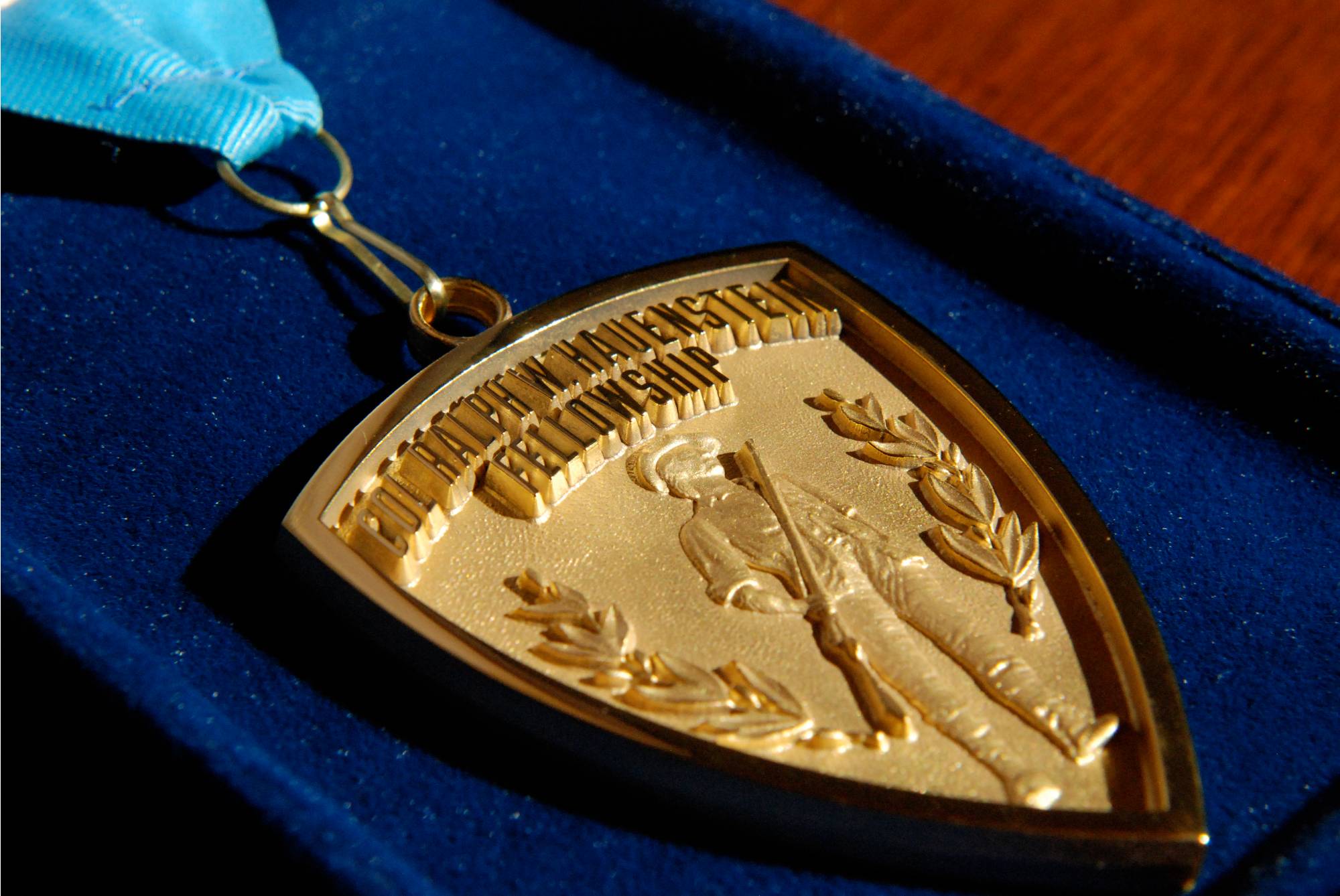 This award was created in 2010 in anticipation of the 50th anniversary of the founding of Grand Valley State University. The Fellowship honors distinguished individuals whose leadership and public service have profoundly influenced the course of our nation and even the world.

The Fellowship recognizes COL Ralph W. Hauenstein’s extraordinary life, which exemplified the service and leadership that Grand Valley State University seeks to inspire in its students and graduates. Below, see the thirteen recipients of the award to date. 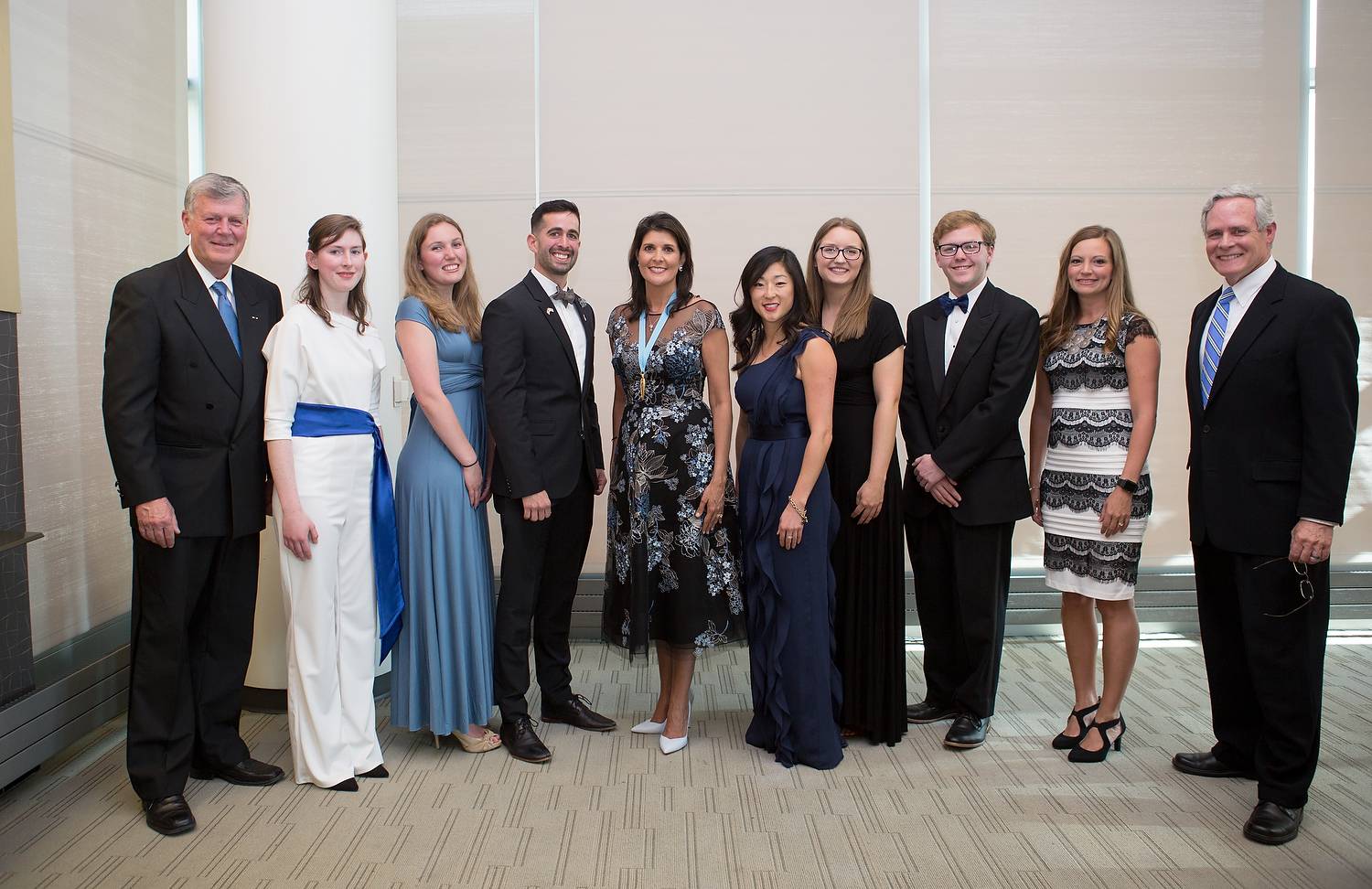 Ambassador Nikki R. Haley is the former United States Permanent Representative to the United Nations. She served as a member of President Donald Trump’s Cabinet and the National Security Council. At the United Nations, Ambassador Haley championed human rights. She challenged human rights violations across the globe, standing up to oppressive regimes in Iran, Syria, Venezuela, Cuba and Russia. During U.S. leadership of the U.N. Security Council, she hosted the first-ever session devoted solely to promoting human rights.

Ambassador Haley ensured that the American people saw value for their investment in the United Nations, introducing reforms that made the organization more efficient, transparent, and accountable. In a two-year period, she negotiated more than $1.3 billion in savings, including rightsizing U.N. peacekeeping missions to make them more effective and targeted, while improving their ability to protect civilians.

Ambassador Haley is a shining exemplar of service to our nation and the world, and Grand Valley State University is proud to bestow upon her the thirteenth COL Ralph W. Hauenstein Fellowship.

Grand Valley State University, through its Hauenstein Center for Presidential Studies, is proud to have confer the Center’s most prestigious honor, the COL Ralph W. Hauenstein Fellowship, upon General Wesley K. Clark. The Fellowship, which honors distinguished individuals whose leadership and public service have significantly influenced the course of our nation and even our world, is inspired by COL Hauenstein’s extraordinary life. A valedictorian at West Point and later a Rhodes Scholar, Wesley Clark retired as a four-star general after 38 years in the United States Army, having served as Supreme Allied Commander, Europe, during Operation Allied Force. He helped write and negotiate significant portions of the 1995 Dayton Peace Agreement. We honored Ralph’s legacy on a special evening that included a Common Ground Initiative presentation by General Clark on the challenges of overcoming polarization in America today. 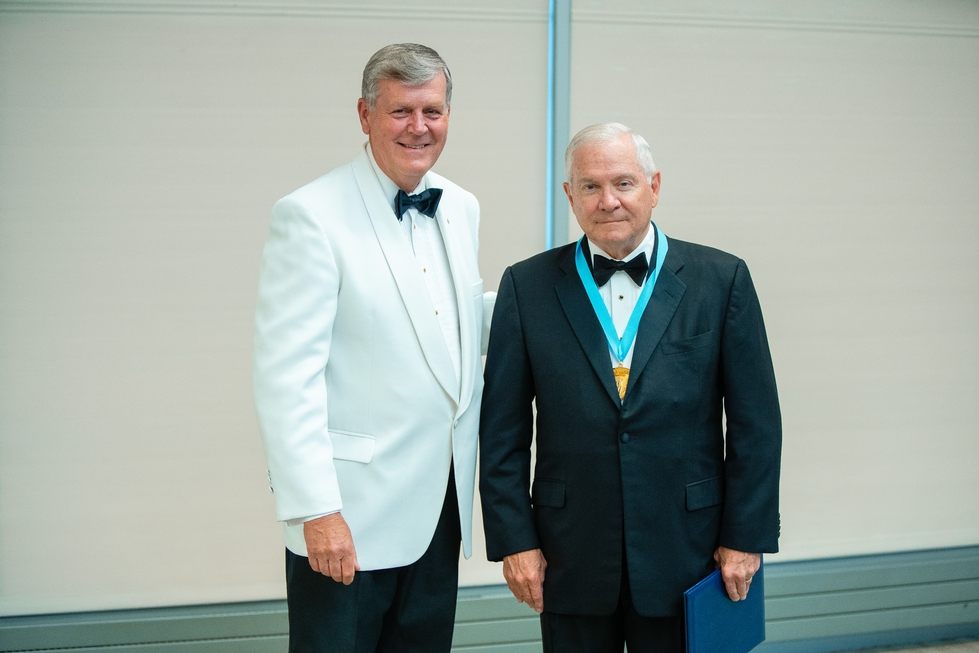 Secretary Gates was awarded the medal prior to his keynote lecture for the Economic Club of Grand Rapids Annual Dinner, at the DeVos Place.

Secretary Robert Gates served as the 22nd United States Secretary of Defense from 2006 to 2011.  He is the only defense secretary in American history to be asked to remain in office by a newly elected president. President Barack Obama was the eighth president Secretary Gates served.  He previously served in the position under President George W. Bush, demonstrating his commitment to keeping the country safe through dedicated public service across partisan lines.

Secretary Gates served as Director of Central Intelligence from 1991 until 1993.  He is the only career officer in the history of the CIA to rise from entry-level employee to director.

A lifelong scholar, he holds a Ph.D. in history from Georgetown University, and currently serves as Chancellor of the College of William & Mary, his alma mater. He served as President of Texas A&M University from 2002 to 2006.

The Hauenstein Fellowship Medal recognizes the extraordinary life of the center's namesake, Ralph Hauenstein, and is intended to honor distinguished individuals who exemplify the service and leadership that Grand Valley State University seeks to inspire in its students and graduates. 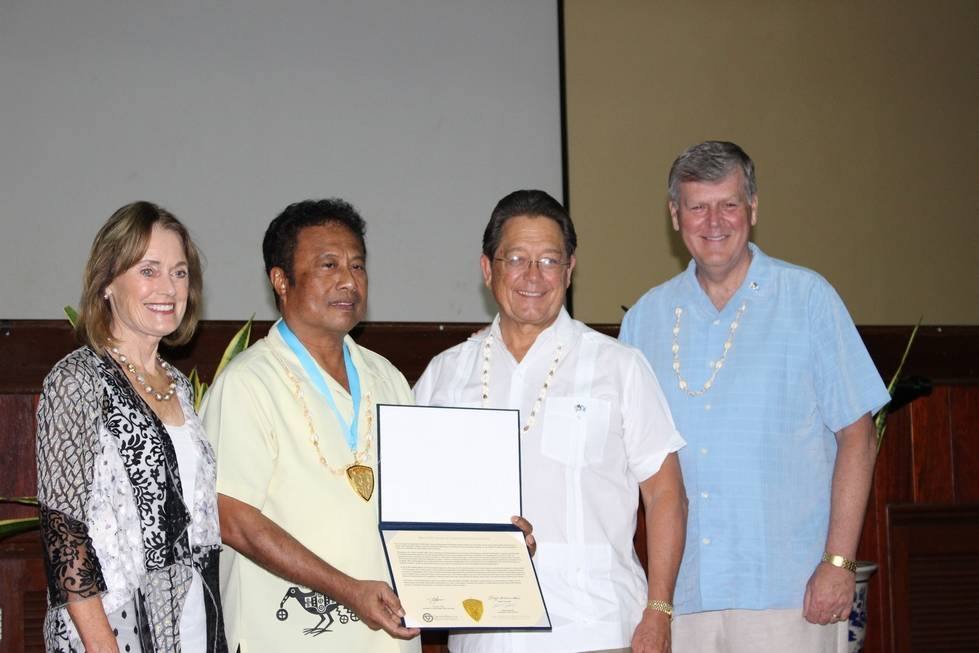 Mark Schaub, chief international officer, said more than 10 people from Palau have graduated from Grand Valley, and two students are currently enrolled. Schaub also traveled to Palau in March and gave presentations about Grand Valley to students from the country’s six high schools.

“There is one community college in Palau, and a handful of students from there have also enrolled in Grand Valley,” Schaub said.

Remengesau was the speaker at Grand Valley’s fall commencement ceremony in 2002.

The spring 2016 COL Ralph W. Hauenstein Fellowship Recipient, ADM James M. Loy, served as Commandant of the U.S. Coast Guard from 1998 to 2002. During this time he improved the effectiveness of the service by sharpening its readiness and ensuring it was prepared for the transition to modern ships and technology. In response to the terrorist attacks of 9/11, ADM Loy helped the nation defend itself by dedicating more of the Coast Guard’s resources to port security, allowing the United States to focus on recovery. His success as Commandant led to appointments in the Department of Transportation, first as Deputy Under Secretary for Security and Chief Operating Officer of the Transportation Security Administration, and then as Under Secretary for Security. ADM Loy later served as the Deputy Secretary of Homeland Security from 2003 to 2005, culminating a 45-year career in public service

John Beyrle served as an American diplomat for three decades, in foreign postings and domestic assignments focused on Central and Eastern Europe, the Soviet Union, and Russia. After his appointment to Bulgaria (2005-’08), he was appointed as ambassador to Russia (2008-’12). During the latter assignment he helped implement policies that led to improved US-Russian relations, highlighted by the signing of the START nuclear arms reduction treaty, Russia’s accession to the World Trade Organization, and liberalized visa and travel protocols.

On September 11, 2001, just months after O'Neill was appointed Treasury Secretary, the country faced the most horrific terrorist attacks in its history. The events surrounding 9/11 precipitated a sudden downturn in U.S. economic growth, closely tied to economic uncertainty worldwide. Secretary O'Neill helped restore confidence in the economy by vowing to eliminate the funding sources of terrorist attacks that continually threatened America's peace and prosperity. After one year of servant leadership, Secretary Paul O'Neill resigned from the Treasury Department on December 6, 2002.

The Hauenstein Center for Presidential Studies presents the 2013 COL Ralph W. Hauenstein Fellowship to former US Secretary of State Madeleine Albright. Albright will also speak on her new book, Read my Pins—a book that would never have been written if not for Saddam Hussein. When U.S. ambassador to the United Nations Madeleine Albright criticized the dictator, his poet-in-residence responded by calling her "an unparalleled serpent." Shortly thereafter, while preparing to meet with Iraqi officials, Albright pondered: What to wear? She decided to make a bold statement by choosing a snake pin. Although her method of communication was unconventional, her message was as old as the American Revolution—Don't Tread on Me.

"I am very grateful to have received the Ralph W. Hauenstein Fellowship. What an amazing person Ralph Hauenstein must be!"

Grand Valley State University, through its Hauenstein Center for Presidential Studies, is proud to offer the Center’s most prestigious honor – the COL Ralph W. Hauenstein Fellowship, to Lieutenant General Brent Scowcroft, USAF (Ret.), one of the nation’s preeminent authorities on international policy.

For all his accomplishments, the Hauenstein Center for Presidential Studies is proud formally to recognize General Scowcroft with this fellowship.
Established in 2010 in conjunction with the fiftieth anniversary of Grand Valley State University, the Hauenstein Fellowship honors distinguished
individuals who have helped shape the policies that have profoundly influenced the course of our nation and world, and whose leadership and public service are in keeping with the life and values of COL Ralph W. Hauenstein.

Grand Valley State University, through its Hauenstein Center for Presidential Studies, is proud to present the Center's most prestigious award - the COL Ralph W. Hauenstein Fellowship.


Page last modified November 5, 2020
Report a problem with this page