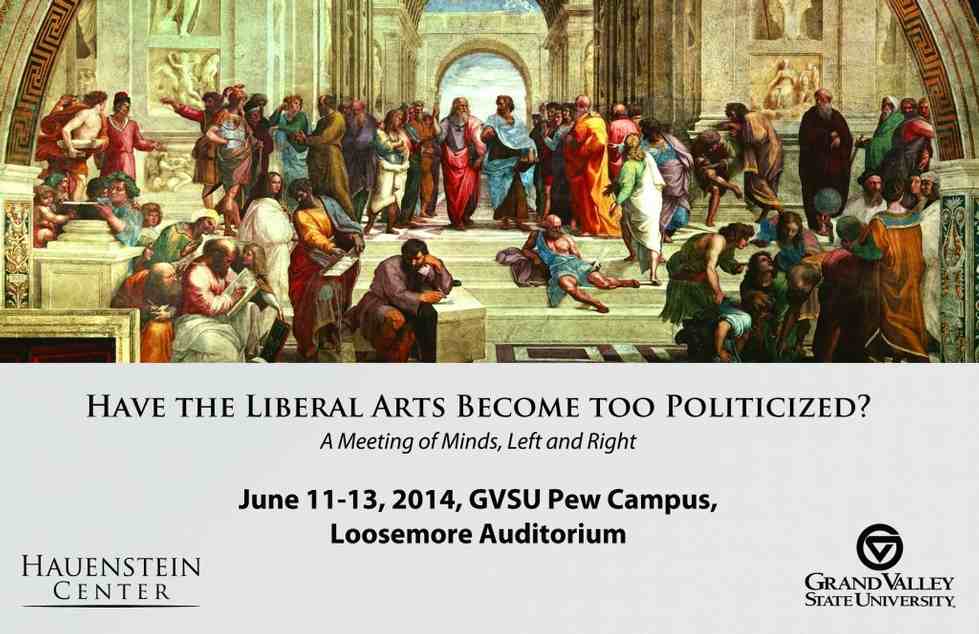 Have the Liberal Arts Become Too Politicized?

A Meeting of Minds, Left and Right

Have the Liberal Arts Become Too Politicized? A Meeting of Minds, Left and Right
Hauenstein Center Common Ground Summit

About the Summit:
Academic rigor requires intellectual diversity and the free interchange of ideas between the left and the right. However, numerous recent books, surveys, and articles suggest that the opposite is occurring in the academy: the ideological gulf between conservatives and progressives, particularly in the humanities and the social sciences, is actually widening. Our summit focused on the perceived politicization of higher education and ways to promote constructive and principled discourse between the left and right. Keynote speakers and panelists from Princeton, New York University, University of British Columbia, Ohio State, Youngstown State, Penn State, Houston Baptist University, St. John’s College, University of Colorado, Aquinas College, The Imaginative Conservative, the National Endowment for the Humanities, and Grand Valley State University explored how the academy can overcome ideological divides and discover common ground in the liberal arts.

Background:
In the past year, the Hauenstein Center has developed civic leadership through its Common Ground Initiative, an effort to bring together progressives and conservatives in an open, respectful, and intellectually rigorous forum to explore possible common ground. With funding from the National Endowment for the Humanities, we have hosted major researchers and scholars to investigate the first principles of these two traditions, and explore the possible common ground that they might share – historically, culturally, politically. Unique in higher education today, the Common Ground Initiative offers a balanced, comprehensive exploration (and redefinition) what it means to be conservative and what it means to be progressive in the 21st century.

This conference was in partnership with the Russell Kirk Center for Cultural Renewal. Support is provided by the Dyer-Ives Foundation and the Earhart Foundation.

Bradley Birzer
Keynote: Citizenship in a Republic of Letters

Robert George
Keynote: Is There a Cure for Campus Illiberalism?

William Craig Rice, Jonathan Zimmerman
Keynote: What Is to Be Done?

Chris Nelson, and a reflection by Arend D. Lubbers
Lunch/Keynote: Beyond Politics: Liberal Education and the Future of the Republic

Deborah Mower, response by Noreen K. Myers
Keynote: Marketing the Marketplace: Civility in Academia and Beyond


Page last modified July 9, 2021
Report a problem with this page