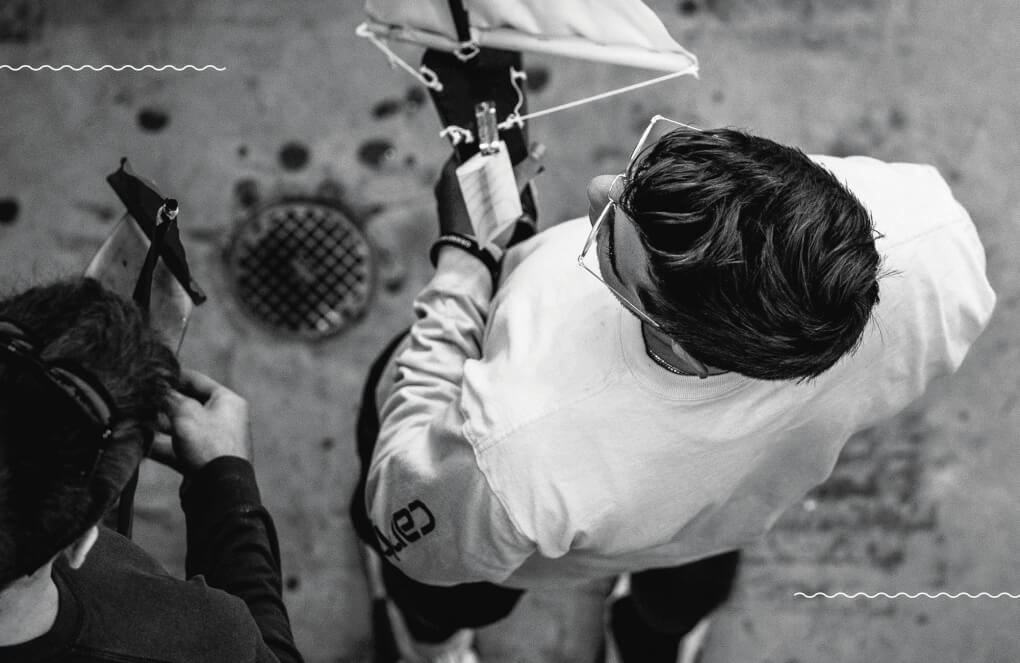 is both tradition and design thinking challenge

NOTE: The regatta was held in August, before face masks were required inside campus buildings, per COVID-19 protocols.

It was literally a sink or swim moment for Hunter Vizzini. 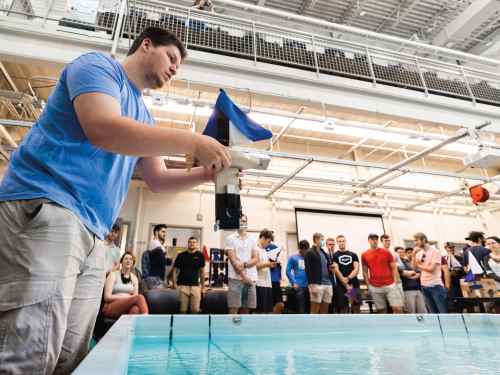 Vizzini, a junior who is majoring in mechanical engineering, carefully placed his hand-carved basswood sailboat in the Keller Engineering Labs towing tank. The boat, majestic with its Laker blue and black sails, started its course in the 12-foot tank straight, then due to steady fan-powered winds from the north, slowly turned right and ran into the tank’s south wall at the midway point.

Yet Vizzini projected his boat would finish that way, because of previous tests. “I made it so it decreased the drag and made the sails loose so they would grab the wind,” he said. “I wish it would have made it across the tank, but it was still fun.”

Vizzini was one of 63 engineering students to participate in the annual Wooden Shoe Regatta, which in August celebrated its 30th anniversary.

Shirley Fleischmann, professor of engineering, brought the idea of a sailboat regatta to Grand Valley after leading similar events when she taught at the U.S. Naval Academy. Fleischmann said it’s the perfect culmination to a course in fluid mechanics.

“It provides a meaningful context for many of the concepts taught in the course and does so in a way that students grow to care deeply about the event. They learn by doing,” Fleischmann said.

Students were given 2-inch by 4-inch by 10-inch blocks of basswood in late June to create 1/12th scale single-hull sailboats. Fleischmann said students use special scaling laws to predict the behavior of a full-scale hull; wind tunnel tests are also performed on model sails.

“All of this testing and reasoning behind the special design features are the technical heart of this project,” she said.

Regardless of how a student’s boat performs at the regatta, Fleischmann is more interested in their overall lab report, which is why Vizzini and others did not worry that their boats failed to finish the course.

“When I tested my boat, it ran the same route; this race was about what I expected,” Vizzini said.

Prizes are presented for fastest and most stylish boats. Trophies resemble a wooden shoe, a tradition that began with Fleischmann’s mother, who shipped wooden shoes from Holland to Annapolis, Maryland, so Fleischmann could present them to winning Naval Academy students.

Fleischmann said the regatta demonstrates how engineers can devise multiple solutions to one problem.

“They use design thinking techniques and really learn about themselves as engineers during this project,” she said. “It’s a very competitive event but there are lots of students who give each other advice, so there is lots of teamwork. Ultimately, they are doing a practical application of what we learned in the classroom.” 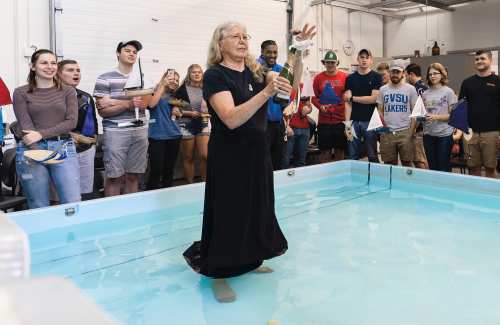 “They use design thinking techniques and really learn about themselves as engineers during this project.” 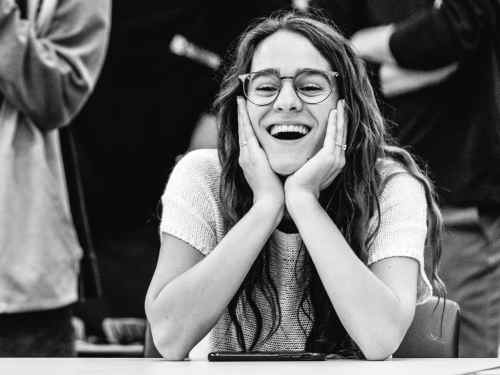 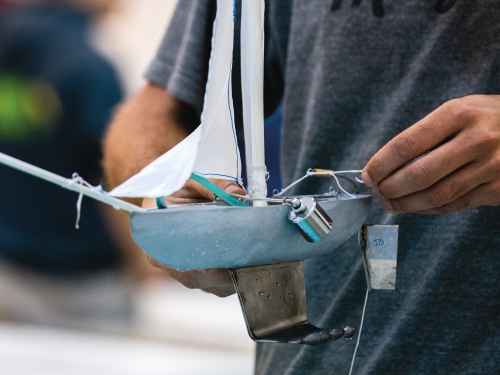 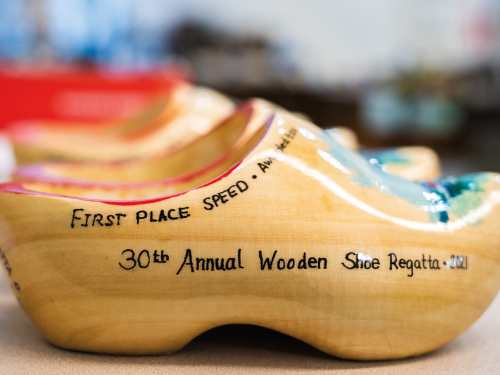 Senior Noah Speechley was the first student in the history of the 30-year regatta to win for both style and speed. 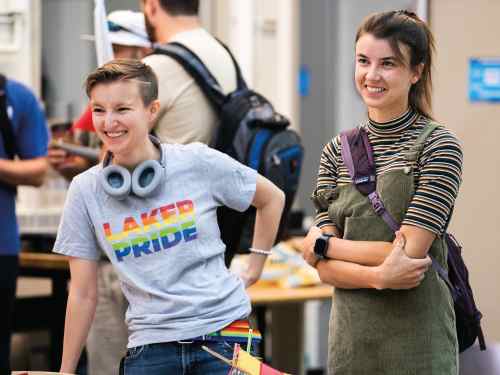 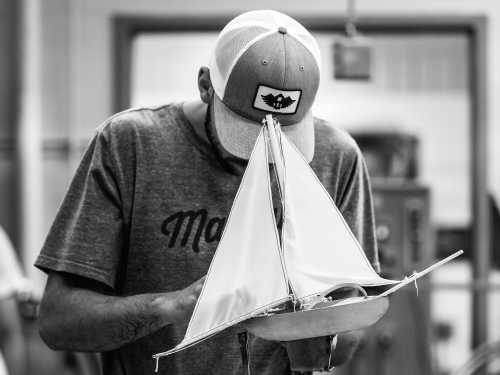 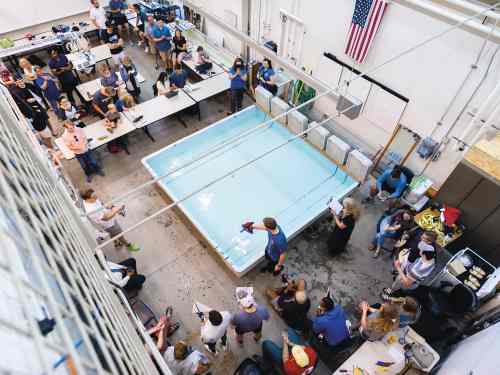 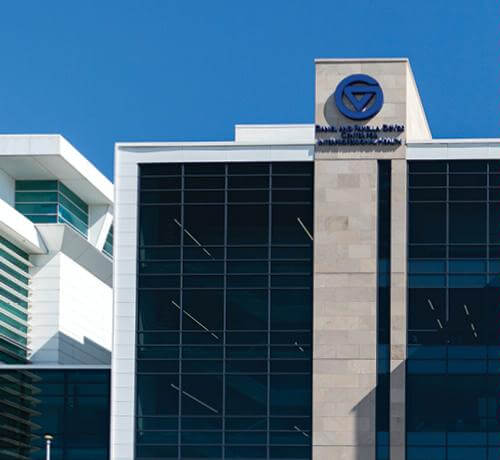 The Daniel and Pamella DeVos Center for Interprofessional Health

Tour the building and learn why students in health professions say the DCIH labs and its technology will enhance their learning and prepare them for the workforce. 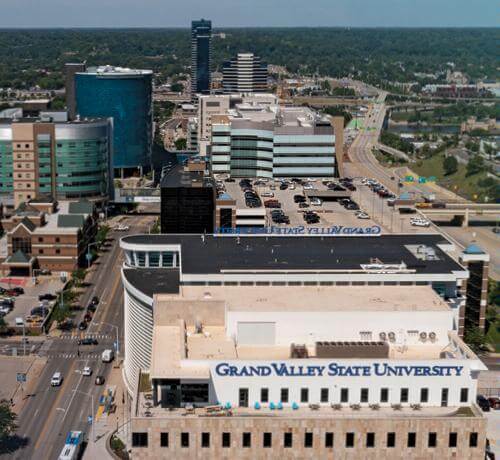 As the first educator on the Medical Mile, Grand Valley deepens its impact by opening the DCIH. 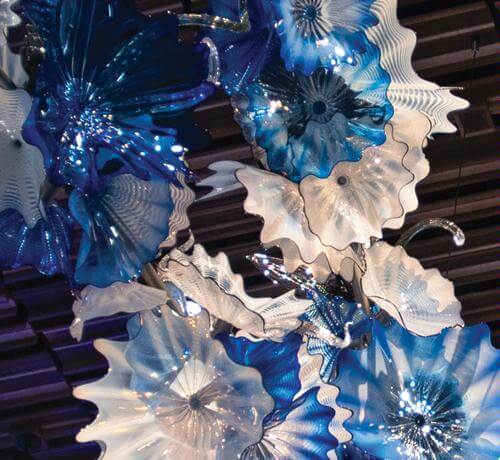 More than 400 pieces of artwork in the DCIH were selected for their ability to prompt people to think and encourage them to ponder the human connection.