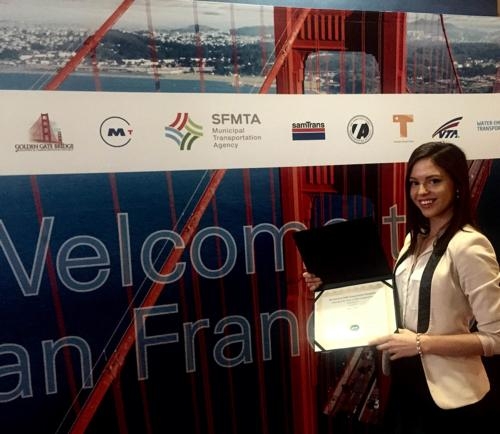 Yulia Conley, has been accepted to University of Oxford School of Geography and Environment master of science program in Environmental Change and Management. Yulia graduated from GVSU with BS in geography and economics and minors in sustainable urban and regional planning and statistics in 2016. She is currently an intern in the United Nations Habitat in New York.

While studying at GVSU Yulia earned a Semester at Sea scholarship.

Yulia Conley has never been on a cruise ship. This could make her spring 2016 semester interesting, as she’ll be spending all of it cruising around the world’s oceans and conducting research.

The senior economics and geography major was awarded one of two presidential scholarships, totaling nearly $30,000 for the University of Virginia’s Semester at Sea program, covering every expense from tuition to visa fees.

Conley, an international student from Russia, was awarded the scholarship on the strength of her research proposal, which will have her measuring the impacts of the sea level rise on the coastal communities around the world. The project idea was developed through her collaboration with geography and planning faculty members Roy Cole and Patricia Houser. For her research, she will study what’s being done in these areas to address rising sea levels and how that will affect coastal cities.

“When I started doing research online, I discovered that not many of the vulnerable nations are implementing robust strategies and policies to address this issue,” she said.

She, and 600 other students and professionals from around the world, will be visiting Hawaii, Japan, China, India, Vietnam, Burma, Mauritius, South Africa, Ghana, Morocco and England. Though she doesn’t know anyone else who will be on the ship, she said many have gotten acquainted through a Facebook group.

“I think that it’s such an incredible bunch,” she said. “Everyone is so enthusiastic about travel and learning. Everybody seems very friendly.”

Despite her lack of experience with ships, Conley said she isn’t concerned.

“For me, that was the least of my worries,” she said. “My mindset is so positive toward this program that I haven’t found that to be the major challenge for me.”

Conley has served as president of the Urban Planning Association, planned a conference for high school students and completed several internships.