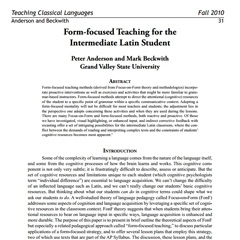 Mark Beckwith '11 took a mythology class while a student at Grandville High School, so when he came to Grand Valley a Classics course in Greek sounded interesting.

“I thought it would be cool and give me some bragging rights with my friends,” he said. “I didn’t realize until the first day of class that it was about Ancient Greek, which is read, not spoken.”

Undeterred, he dove in and found that he loved it — so much so that he took four years of Greek, then added Latin, graduating in 2011 with a Latin Secondary Education degree (double major in Classics and English). Beckwith’s passion led him to a good job market, as there continues to be a national shortage of qualified Latin teachers.

Since graduating, Beckwith has taught Latin for two years at Cardigan Mountain School in New Hampshire, a private boarding school with just over 200 students in grades six through nine. “My wife and I lived in a dorm with 18 boys on our floor, who we ate family style meals with three times a day,” said Beckwith. “I also served in an advisor role and coached basketball and baseball, without any previous coaching experience.”

Beckwith said the courage to continue to challenge himself comes in part from Classics faculty members who were very supportive and provided opportunities. One such opportunity was the result of Beckwith’s Honors College Senior Project on teaching strategies for intermediate Latin students. The final product was an article co-authored with advisor Peter Anderson, associate professor of Classics. The article presented the results of their research and was published in a peer-reviewed academic journal for teachers of the classical languages in North America and Europe.

“When Mark began interviewing for teaching jobs, he already had many of the academic experiences usually obtained in graduate school,” said Anderson. “He also had a string of prestigious awards, including Distinguished First Year Greek Student and Outstanding Undergraduate in the College of Education.” Beckwith also received the University’s Department Award when he graduated.

Others are also taking notice. Beckwith was recently recruited by a private K-12 school in Utah, where all middle school students are required to take Latin. “I’m drawn to the opportunity at Waterford School in part because of the heavy liberal arts focus,” said Beckwith. “They recognize the interdisciplinary value in the study of Latin, particularly as preparation for their high school curriculum, with students drawing from the Latin roots of science terminology, in studying other languages, and in building critical thinking skills.”

The school was founded 1981 by Waterford Institute, in part to study how students learn and how they use technology — both are areas of interest to Beckwith. “At Cardigan I taught a flipped classroom of students in first through third level Latin at the same time,” he said. “By creating lecture videos for each level to watch as homework, we flipped their classroom experience into a work time, where I was able to attend to their individual needs.”